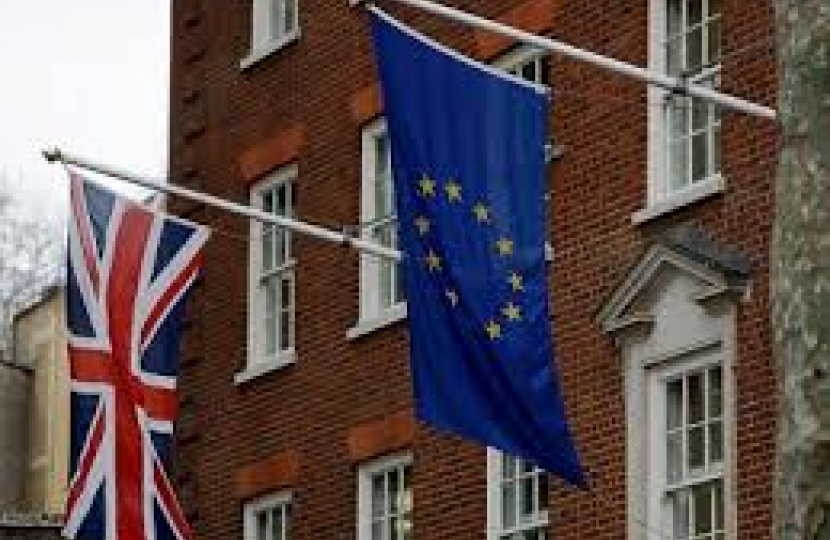 Next Tuesday, 12 March, I will be asked to vote on whether to accept Mrs May’s Draft Withdrawal Agreement (hopefully amended) or not.  If her plan is rejected then on the following two days there will be a vote first on not accepting a withdrawal on World Trade Organization rules (a so-called ‘No Deal’ scenario)  and thereafter a vote on extending Article 50 which effectively means we may not leave the European Union on 29 March (also depends on the EU too).

In truth the way I vote in Parliament on most decisions is normally relatively easy.  To start with I remind myself of how my vote aligns with promises made at the last General Election in the Conservative Manifesto on which I was elected.  By the way, at that election both the Conservative and Labour Party promised that they would abide by the Referendum result and leave the European Union.  There were no pre-conditions on those promises despite what some say now.

I must also think how the matter will affect Beckenham and what people in my home area think.  In that respect my calculation from the Referendum result that the decision to leave the European Union was almost 50/50 with a less than one per cent difference between the two thoughts - in favour of remaining. Since then of course there has been the General Election and the pledge by both major parties that we would respect the Referendum’s result.  My mandate comes from that General Election 2017 and not from the Referendum in 2016 in truth.  However I also know that most people are heartily sick of the whole subject and want it resolved.

Thereafter, I am influenced by my own political and personal beliefs as well as by what I hear and read.  I listen carefully to local Conservative Party members in particular; they, after all, go out on the streets and campaign for me at elections.  I talk with MP colleagues and Bromley counsellors I respect too.  Of course, I listen and hear what the Media is suggesting as well as what appears on social media.  Then I am briefed and corralled by the Whips whose principal aim is to get Government policy enacted.  That matters to me a lot as well but occasionally, I am afraid, other factors than what the whips want decide how I vote.

It is all these factors that will determine exactly which lobby I go through next Tuesday 12 March at 7pm.  In truth I  would like to support Mrs May’s Draft Withdrawal Agreement – provided it is sufficiently amended, particularly on the so-called Backstop provisions.  I do not want Northern Ireland treated separately to England, Scotland and Wales and I want a definitive end date to our relationship with the European Union.  If such conditions are met then I might be able to vote for the Government’s deal - albeit with gritted teeth in some respects.

I am clear that taking a withdrawal on World Trade Organization rules (so-called ‘No Deal’) off the table is barmy.  No negotiator ever gives up a bargaining chip for nothing in return.  I can hardly believe that a Government Minister (Amber Rudd) can sponsor such a suggestion.  So, if there is a vote on this matter on Wednesday 13 March I am highly likely to vote against it.

Thereafter, if there is a vote on extending Article 50 on Thursday 14 March I am also likely to vote against it too – unless it is a very small, defined extension for technical/legal reasons.  What is the point of doing this anyway?  Truthfully the most vociferous people that advocate it want to frustrate the will of the people and remain in the European Union.

Personally I am much less fazed than many at leaving the EU with a clean break than many others.  A break clean from the EU may have some disadvantages but it also has tremendous advantages too – particularly because the whole matter is resolved on 29 March and we will be utterly free thereafter to make our own decisions thereafter.  I have not mentioned money here because that is a secondary factor in my view.

I was elected to make choices that I consider to be right.  Of course I am human which implies mistakes but I hope fervently that in these votes I am right.  I know some people will disagree with me but so be it; politics is about choice. My job is to represent everyone in Beckenham.  I am not a delegate but elected to decide myself.   But please, whatever you views, do not think that I will be entering any lobby next week without truly believing that what I am doing is in the best interests of my country and my constituents even before my own political party.