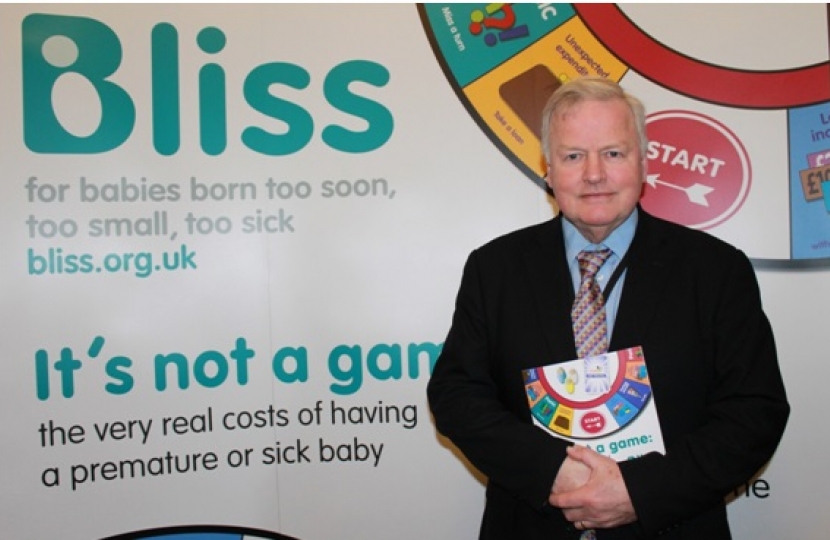 On Thursday 27 February Bob attended a parliamentary campaigning event in support of special care for babies as organised by  Bliss, the special care for babies charity.   A campaign has been launched with the release of their report called ‘It’s not a game: the very real costs of having a premature or sick baby’, whichis based on a survey of over 1300 parents and 178 hospitals in England, Scotland and Wales. The report found that:

·         Costs such as paying for food and drinks averaged £53 a week, while parents faced travel costs including petrol and parking averaging over £100 per week.

·         Three quarters of parents reported that their household finances worsened as a result, while one in five couldn’t afford to pay bills such as their rent or mortgage.

·         Alongside the financial burden is the cost to parent’s health, with almost two thirds of parents reporting that their mental health had worsened as a result of the extra pressure.

Bliss wants more to be done to help families who face these issues and wants parents travelling more than 20 miles to see their baby in hospital to have their costs reimbursed. Bliss also believes that they should also have access to free parking and accommodation so they can be near their baby at this very worrying time, as well as meals provided and access to childcare at the hospital.  One in nine babies in Beckenham is admitted to specialist hospital care each year.