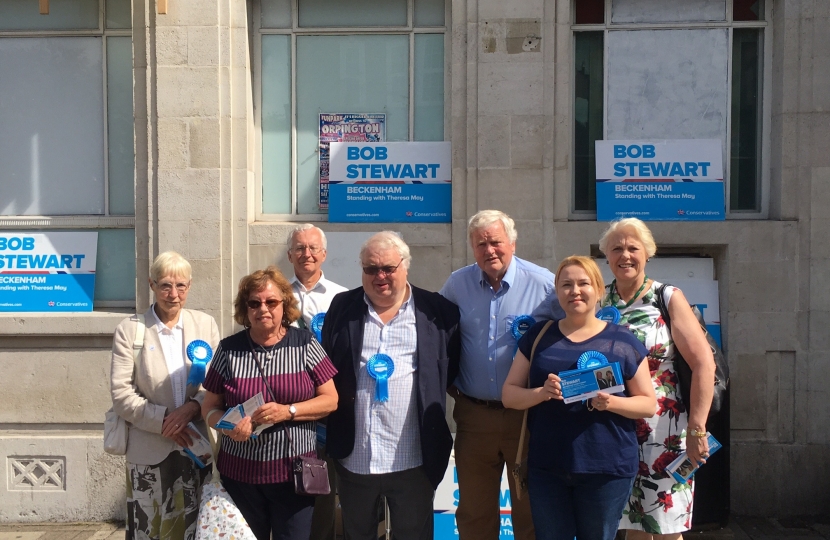 I arrived back in Gatwick from my mother-in-law’s funeral at 0730hrs this morning and, after a brief pit-stop for breakfast with Robert Straker and other friends in Renzi Yildrim’s Moonlight Café on Croydon Road, I went directly to the West Wickham Conservative Street Stall in the High Street there. Led by Scott Pattenden, Brian Cooke and Tony Power as well as Paul and Gloria Brown we stayed there for two hours or so taking to a great number of people passing by.  I do not think I spoke to anyone who said he was not going to vote Conservative which was excellent news.  It was pretty hot on the streets and so most of us had a refreshing beer in the Swan at the end.

Just prior to my departure for Geneva (last Thursday morning), I was able to visit the first opening of postal votes in the Great Hall of Bromley Civic Centre.  Together with Tony Power and Brian Cooke I toured the tables to thank the teams of (typically) three people who were actually opening up the first postal votes from Beckenham.  The people doing the job seemed in a very good mood and were enjoying their work which I thought was great.

I am much influenced by my good friend and agent, Tony Power, who always talks common sense par excellence. This week Tony pointed out how comparatively little the General Election Campaign has concentrated on three crucial matters; the Security of the United Kingdom, the Economy of our country and how we should approach negotiating BREXIT.  I think he is absolutely right.  We should have heard more on these subjects.  So let me briefly review each in turn.

Firstly, the primary duty of Government is indeed the Security of our country.  If we get this wrong, we could find that nothing else matters.  In this respect, I am thinking of Nuclear Deterrence in particular.  We also have to grasp the nettle of how to deal with domestic terrorism (often home grown too) and be prepared to defend ourselves outside our islands.  MI5, MI6 and GCHQ naturally lead on identifying threats covertly and they are supported, obviously more explicitly by the Police and Armed Forces. All cost money and they are all strapped for cash and resources at the moment. Whoever is our Prime Minister needs to provide constant financial support and effective decisiveness on this first and vital responsibility.

Secondly, most certainly we have not heard enough about the state of our economy which is very far from out of danger.  As I have previously written we are still overspending to the tune of more than £53 billion a year and each year that we fail to balance our books tops up the National Debt which currently stands at £1.7 trillion. Since 2010 we have reduced our deficit by over £100 million but it is still in the red and borrowing more to give extra cash to any Government department simply stacks up more National Debt.  Whoever is our Prime Minister must recognise this fact and take action on it.

Thirdly, a lot has been said about BREXIT and the intention is to go immediately into negotiations on it within two weeks of the General Election.  People keep talking about a ‘soft’ BREXIT which I think they believe to be us out of the European Union but still in the Single Market.  I would like that too (who would not?) but Brussels has already laid down its position on this; membership of the Single Market requires free movement of EU peoples and a massive annual payment as well as other conditions if you are not a full EU member. Maybe we can have a deal but not having one is better than a bad one.  We can always walk away from the EU without a deal if whatever is proposed by Brussels is not fair. I believe European states would suffer more than we would in such an eventuality.   Whoever is our Prime Minister needs to have the strength and determination to negotiate the best BREXIT deal possible and the mettle to walk away if we do not get one.

On all three questions Mrs May comes up trumps compared with Jeremy Corbyn.  That’s why we must have her as Prime Minister.