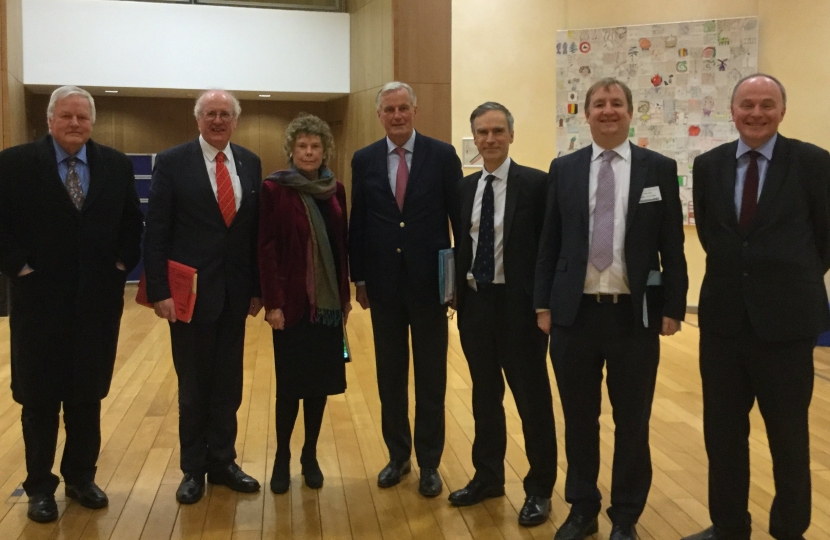 I spent today, Monday 22nd January, in Brussels. The main reason for being there was to meet with Michel Barnier, the European Union's Chief BREXIT Negotiator. I went with five other MPs, all from the Northern Ireland Select Committee. We met Mr Barnier in the European Union Commission's Conference Room in the late afternoon.

Michel Barnier began by stating that BREXIT negotiators should have the draft Withdrawal Agreement completed by October this year; with ratification taking place between then and March next year which is when the UK leaves the EU. It seems negotiations are on track.

The EU's Negotiator was also fully aware of our four Red Lines:

Mr Barnier also stated that he, like us, wanted to have an 'invisible' border between Northern Ireland and the Irish Republic and any deal to take full account of Northern Ireland which was, after all, why we six MPs were there.

I was surprised that Mr Barnier was so hugely complimentary about the British BREXIT Negotiating Team - saying they were very professional and thorough. That's good news. He stressed that his own personal approach was to get the best deal for all sides but obviously he was representing 27 other nations first. But he stressed that any deal must work for both sides.

I left the meeting with a good impression of Michel Barnier. I also felt pretty sure that a good agreement, in the interests of both the UK and EU, was far more likely than a 'No Deal' situation so often talked about in the media.

In short I was much encouraged by my meeting with Michel Barnier today.