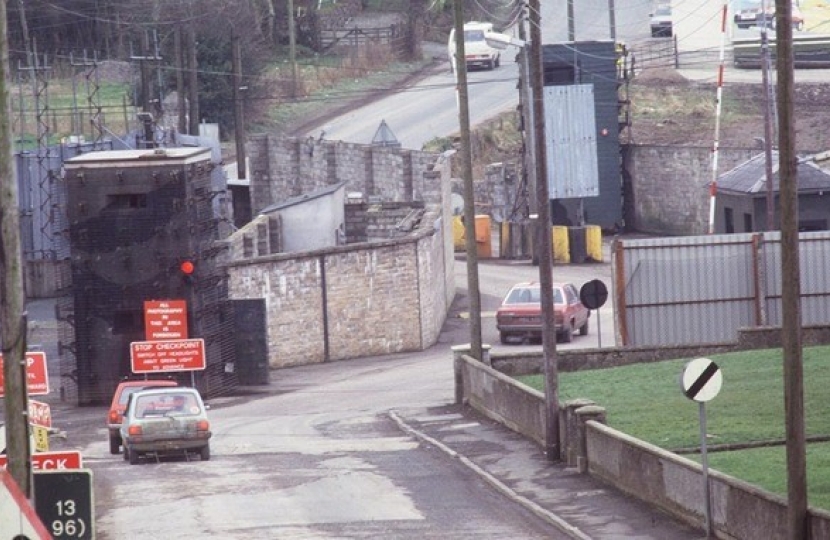 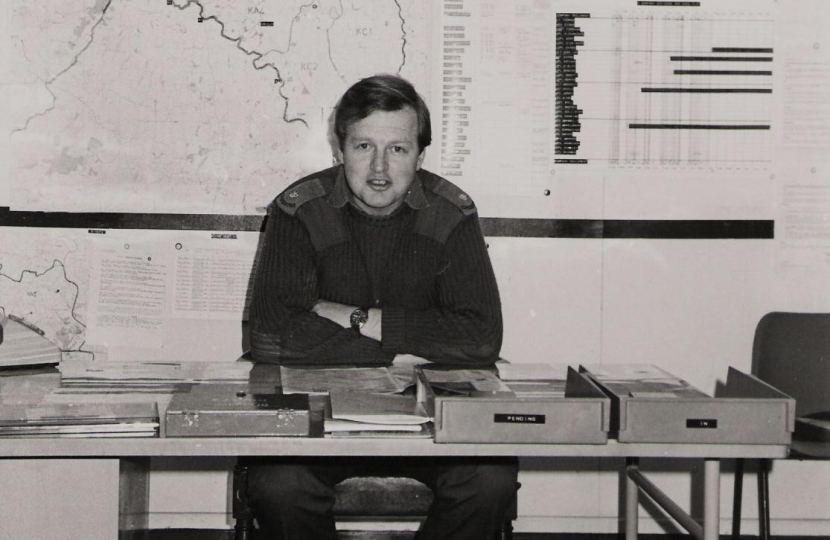 From January 1981 – January 1983 I had the privilege of commanding some great soldiers in A Company, 1st Battalion the 22nd (Cheshire) Regiment and was based in Northern Ireland. I spent every fourth month throughout that period with my Company guarding the border between Northern Ireland and the Republic of Ireland at a crossing point at Auchnacloy, South Tyrone (see photograph of Check Point and myself at Auchnacloy Base).

At the time our mission was to combat terrorism so our main aims were to stop arms and explosives being smuggled into Northern Ireland as well as to identify and arrest terrorists. I think I could classify the Permanent Vehicle Check Point at Aughnacloy as being a hard border – although admittedly not one to control or check trade between the South and North or vice versa. This did not interest us although often our night patrols would report illegal activity – mainly smuggled cattle and fuel which were cheaper in the South.

Now apparently that border has again assumed centre stage in BREXIT negotiations as from 2300hrs on Friday 29 March it will be a frontier between the United Kingdom and the European Union. If we cannot agree an arrangement with the European Union the threat is that any trade crossing between either jurisdiction could be subject to lengthy delays and stoppages to ensure compliance with many rules and regulations. According to many this matter seems to be a major stumbling block in getting any BREXIT agreement.

But just who wants such a hard border? We do not, the Irish Republic does not and the European Union says it does not either. So why then is this a major problem? Who would man it? In truth this so-called problem is raised most by those people who want to stop BREXIT and remain in the European Union. I understand that and their approach. But I suggest the matter is fixable.

Right now there are already separate tax regimes North and South of the Irish border. Fuel, alcohol and food are sold with different prices either side of it. Yet there is no hard border. Smuggled items can be taken across any of the 200 or so crossing points of the 310-mile frontier. Many roads cross the border several times as well. There is no way that each and every border crossing point can be controlled or manned. It does not need to be so either.

Systems such as ‘trusted trader’, ‘advance notification’ and even electronic surveillance can ensure that the border between Northern Ireland and the Republic can be kept free flowing and without interruption. Today 96 per cent of all trade which crosses all World borders does so without a check anyway.

Having had the experience of Auchnacloy for two years I think I have some experience of border controls. In my view there is absolutely no need for a hard border and there are many ways to avoid one. Nobody involved on the island of Ireland wants it. Technology combined with advance procedures can avoid it.

After 29th March there is absolutely no need for any hold-ups to goods crossing either way between the North and South. The only real obstacle to this matter being sorted is people who do not want it fixed – most probably in pursuit of interests other than those who live in the two countries concerned. I am sure a sensible, pragmatic solution to this apparent problem will be found but in the meantime things will go on much as they do today.