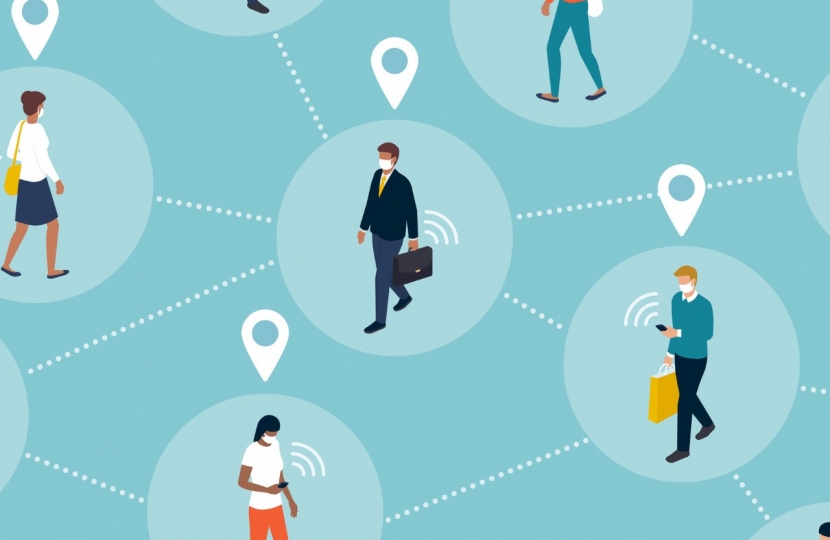 Today I want to have a look at the system we are trying to introduce which is called Contact Tracing. Essentially this is a method of identifying a COVID-19 infected individual and then finding and checking out everyone who has been in close proximity to that individual whilst he or she was liable to be spreading the illness. It seems other countries have already used this sort of system with considerable success.

In fact, we have heard about this contact tracing system for quite a while now; mainly from ministers at the daily Downing Street briefings. In principle the idea is simple. Someone suspected of having Coronavirus is tested fast and, assuming they have the illness, everyone with whom he or she has been in contact is identified and tested too.

I understand that South Korea had a very successful operation along those lines quite recently. Someone infected went to several nightclubs before coming down with the illness. Immediately the system tracked down some 5,000 people who might have met him and identified 30 people who had been infected by the man. They were isolated and the contagion was stopped in its tracks.

In truth it seems countries like South Korea, Singapore and places like Hong Kong were much more prepared than we in the UK (and in Europe) were for contact tracing. The attached photo shows contact tracing in South Korea. As a result of suffering previously from viruses like SARS and MERS they had prepared and established such a system. We had not. There were several reasons for that I guess but one was that we had not had SARS or MERS in the UK.

Obviously, we were thus behind the curve on contact tracing. When, early in the crisis and at a Downing Street briefing, Dr Jenny Harries OBE, Deputy Chief Medical Officer for England, was asked why we were not doing it she replied that it was not a suitable system for the UK. What she actually meant though was that we didn’t have the ability to do it because the infrastructure and test equipment were simply not in place. She didn’t say it explicitly but it needed to be built.

So, during the lockdown, the Government has been trying to rapidly catch-up. Part of that was getting as many people tested each day as was possible. We seem now to be over 100,000 people tested each day but we need many more daily results than that. The other problem is that test results apparently take several days to come back which is simply not fast enough. We must get such results far more quickly than that and huge efforts are now being put into speeding up getting results.

The other part of the system is the track and trace bit. The Government has started to trial such a system on the Isle of Wight using an app but it has not been an unqualified success. The island has a population of about 140,000 people and there have apparently been about 60,000 downloads which is not bad considering quite a large number of people (forgive me, normally the elderly) who live there might not be too tech-savvy. The problem appears to be that there are under 200 cases of confirmed Coronavirus sufferers on the island and all of them are in isolation, thus not meeting others so it has been difficult to check whether the system actually works.

I gather that the app being trialled is pretty basic too and newer, better versions are now around. Enthusiasm for an app has thus waned a little because the Isle of Wight trial was not a great success. So, it has largely gone on the back-burner and other methods of tracking and tracing are being sought.

That is where a Government hiring programme for a 25,000 track and trace army seems to come into play. According to several ministers the ranks have been filled but I haven’t heard of anyone who’s actually a member of the Coronavirus Tracing Brigade so far.

The apparent task of these Coronavirus tracing detectives will be to start at an infected person and then fan out, identifying everyone with whom that victim has been in contact. I have had a look at the recruitment process.

Apparently contract tracers can work from their own homes and earn a minimum of £16.97 an hour. The job advert suggests that by working as a Clinical Contact Caseworker people will be responsible for liaising over the phone with COVID-19 patients, understanding their situation and assisting in the tracing of anyone they have been in contact with and giving them advice. They will be a part of the Public Health England Contact Tracing Service, which is part of a wider testing and contact tracing programme led by the Department of Health & Social Care and supported by NHS England & NHS Improvement and the Cabinet Office.

As advertised key features and responsibilities of this role include:

• Undertaking the initial interview of COVID-19 positive cases by phone.

• Working within agreed guidance and recognised procedures, scripts and structures, with support.

Apparently, contact tracers must have the ability to … “work independently, problem solve, manage and prioritise workload and cope with competing demands”. However, it does seem to me that those people recruited will need to have had some medical experience.

The job advertisement further states that Clinical Contact Caseworkers will be provided with appropriate training, online software, onboarding and induction materials. Working as part of a wider team of experienced clinicians, they will be liaising with call handlers in other teams (as necessary) and escalating any in-depth queries to the Public Health England team.

However, when looking at the successful South Korean contact tracing case study more closely it appears that there those tracking down people who have been in contact with a confirmed sufferer might have almost police state powers. They seem to be able to look into a person’s private life without restrictions, for instance examining credit card bills and any CCTV systems on which they may have appeared, private or public. I wonder how that would go down here in Blighty?

It seems to me we are really not very close to establishing a really effective contact tracing system. My hope is that it will not be needed if the R rate keeps declining. Let’s hope so. The closer it gets to zero I reckon the less we will need social distancing, face masks, travel restrictions or indeed contact tracing. In short, we will be back to normal. Wouldn’t that be great? Let’s pray for it soonest.