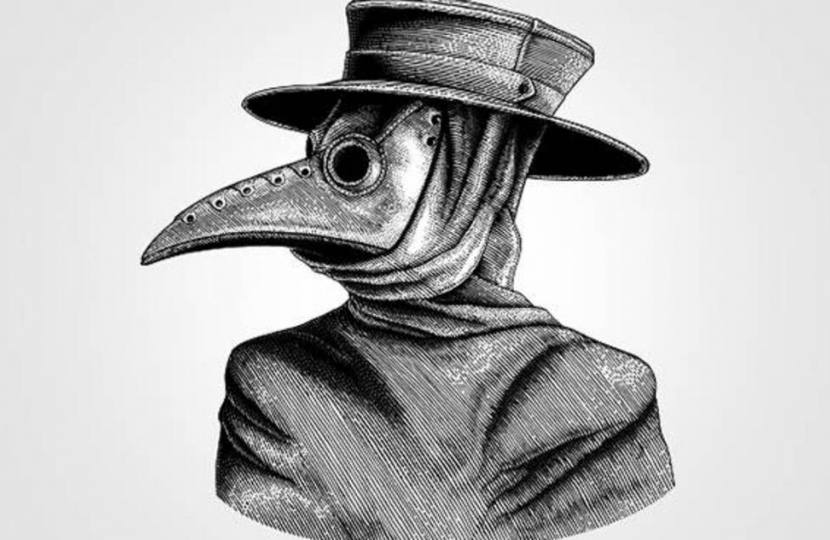 Across the World Influenza kills 650,000, Typhoid about 160,000, Cholera about 140,00 and Malaria takes roughly 620,000 people.  In 2018 Tuberculosis, after developing a very strong resistance to antibiotics, killed 1.5 million people. So, Influenza and TB both kill many more people than Coronavirus.  That’s a bit weird isn’t it?  Have we over-reacted because COVID-19 is so new?

I’m no scientist clearly but I can question why lockdown hasn’t produced a far greater decline in this virus which spreads when people meet one another.  Most of us haven’t met other people for over 2 months now.

I know, because I spoke to them, that Care Homes locally were very particular about their hygiene from the very start of this crisis.  In addition, outside visitors were banned.  Yet the wretched germ has managed to insinuate itself in and kill so many more residents there than in the general population.  Have we missed something here?  Are we blocking one way of infection and cunning Coronavirus has found another way to do it?

In 1348 medieval people were very uncertain as to how the Plague spread.   People were so scared because they weren’t sure what caused it. Some believed it was a punishment from God, some believed that foreigners or those who followed a different religion had poisoned the wells, some thought that bad air was responsible, some thought the position of the planets had caused the plague. Doctors designed and wore masks to fend off the plague (see photo).    Maybe the modern equivalent is the face mask which, like in medieval times, may provide some protection or not. The jury is still out on that one in my view.  Now the accepted cause of the plague is fleas carried by rats but even that is challenged by some who believe lice on humans may have spread it (too?).

Of course, I accept the current scientific orthodoxy about how COVID-19 scatters in the air and on surfaces where it lands having come from an infected individual to be inhaled and thence spread into a previously healthy body.    I have been firmly behind the Government’s measures to contain then force COVID-19 into some form of retreat by lockdown and social distancing.  That remains a given.

But I am beginning to wonder whether we can be a bit more discretionary in the way we apply lockdown.  What really panicked the Government in March was the forecast by Professor Neil Ferguson that about half a million of us could be killed by Coronavirus.  In consequence we went almost directly into a hard lockdown.  Now however, Dr Ferguson’s modelling has been quite well discredited.  At the very least the 500,000 dead figure seems to have been abandoned – except that the Prime Minister strangely made mention of it in his national broadcast on Sunday 10th May.  I suppose I understand why; to remind people that this virus is still a huge danger.

I can assure people who read this of that.  In Bromley the first death resulting from Coronavirus occurred on 13 March and tragically there have been a great number more than that now.  Believe me the figures are pretty gut wrenching.

But we have got to come out of lockdown relatively soon.  People are more and more breaking its strictures anyway.  Yesterday I saw about 6 young men all huddled together in a takeaway in Beckenham High Street.  They clearly believe there is little threat to them from Coronavirus.  Further down the High Street I saw a group of middle-aged people all congregating and talking whilst waiting for a bus.  No way did I see any social distancing there.  And looking at the 358 bus as it passes my house it is getting more and more crowded.  At times that bus looks back to its normal loading.

As people are getting increasingly restless staying at home the Government will have to relieve that pressure as soon as we can. I know the ministers are more than aware of that too.

They will no doubt be considering whether, for instance, people who have recovered from COVID-19 and those that show no symptoms could come out and interact semi-normally, no doubt keeping some distance between one another.  Obviously, at the other end of the scale, care homes and the like should remain in severe lockdown.  Clearly people who have underlying health risks must also keep well isolated as well.

That’s all well in principle but just how it could work practically is the real worry.  The restrictions are fairly clear now but just how they would operate for real is a big problem.  Inevitably some people, given an inch would take a mile and abuse them.  Some people would deeply resent being classed as second class and being told to stay at home too.  For instance, I am 70 years old and apparently hail and fit.  If the Government were to rule that anyone under seventy who was fit could leave their homes but I could not, I would be furious.

Then what happens if the infection rate spikes through the famous ‘R’ level of one?  How would the Government be able to apply reverse gear?  It would be very difficult indeed – if not impossible.

The Prime Minister is on a hiding to nothing if my mailbox is anything to go by.   It is filled with people making directly dichotomous demands.  On the one hand there are those folk demanding that we leave lockdown quickly and get the economy going. Often, poor devils, they need that to get their businesses going again.  Then, on the other hand, I am receiving a huge number of messages suggesting it would be criminal to ease any of the lockdown restrictions.

On BBC’s Question Time last Thursday, Luke Johnson, former Boss of Channel 4 and an entrepreneur, spiced up the programme by pointing out that he was the only panellist from the private sector and thus the only person present (of the 6 including the BBC’s  Fiona Bruce) at risk of actually losing income because of lockdown.  It is a point made repeatedly to me by constituents in a similar position to Johnson and it makes me squirm a little too as I do not have to make a profit every month.  Where you sit on this argument often comes from the situation in which you find yourself.

The Government is in a cleft stick when it considers to lockdown exit choices.    To do or not to do, that is the problem.  Boris Johnson will be damned if he dilutes lockdown and damned if he doesn’t.  The country is pretty split on the matter.