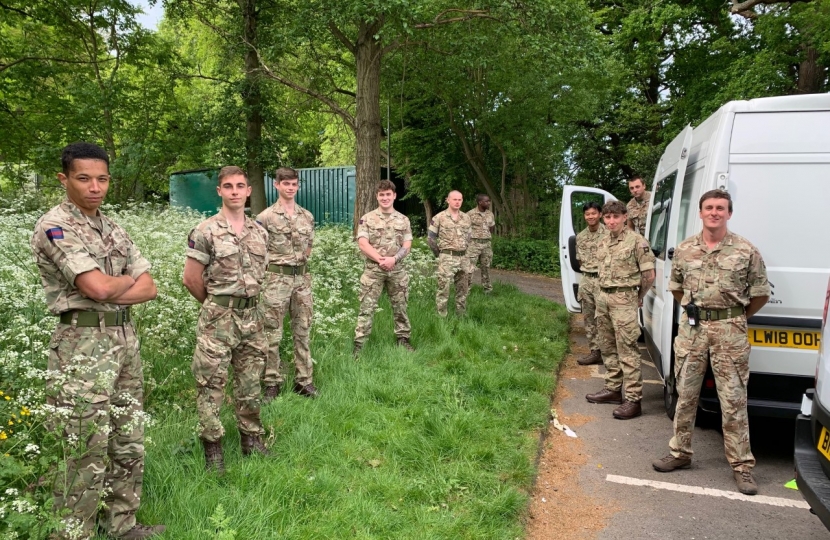 We have all heard that our armed forces have been pitched into the fight against Coronavirus but what they are actually doing is largely hidden. I suspect people who are doing jobs away from their houses may have seen military vehicles buzzing around but not me from my eyrie with only a narrow view of Shortlands Road!

So, today I want to consider just what soldiers, sailors and airmen are doing to help us all in the Coronavirus Crisis. I declare an interest having once been a soldier myself and with our daughter, Delphine, an RAF officer, currently based at RAF Coningsby.

The Coronavirus pandemic is first and foremost a public health crisis. I accept to start with there was a quite normal reluctance by civil authorities to call upon the services of the Military. I write the word normal because t ’was ever thus. Government departments don’t like admitting they cannot cope. Who does honestly? It goes against the grain to ask for help.

Yet the armed forces themselves have always prepared and trained to help in civil emergencies. This training is given a distinct name. It’s called Military Aid to Civil Authorities (MACA) and in my time we often trained and practised doing it on exercises. So, what are the armed forces doing?

Clearly the Military’s assistance has focused on supporting the NHS. Most obviously near to us, military personnel have helped build the Nightingale Hospital at the Excel Centre but they have also built similar facilities in Birmingham, Manchester, Glasgow, Cardiff, Yorkshire and the Humber, Bristol, Sunderland and Exeter.

In Yorkshire and Bristol, 135 military medical personnel are assisting NHS staff, helping with basic patient care and monitoring. A further 160 personnel are assisting with more general duties, including porterage, equipment maintenance, stores management and distribution services. I am sure there are many more Service personnel working in the NHS but the ones I have cited are the only examples I have seen in the media.

But I do know that the Military are operating 92 of the 96 Coronavirus Testing Units across the country. That’s really helpful. We had one of those units (again) over last weekend. This time it was commanded by Second Lieutenant Ralph Madden with his soldiers from 6 Platoon, Number Two Company, 1st Battalion the Grenadier Guards (soldiers in photo). These pop-up facilities were organised and personnel trained in under a week. Ralph told me that he thinks the Military will expect to be deeply involved when mass testing for anti-bodies starts (determining whether someone has had, is immune or still has Coronavirus). The science isn’t there yet though.

About 200 members of the Army, the Royal Air Force and the Royal Navy are also directly supporting NHS ambulance services. At the same time more than one hundred Tri-Service personnel have been trained to drive and operate oxygen tankers when and if required. Of course, I didn’t really think of it before but Intensive Care Units must use huge amounts of oxygen. That needs constant replenishment. Very locally I understand from David Tait, Emergency Planning and Corporate Resilience Lead in Bromley Council, that the Army shipped in urgently needed PPE when it was needed and I believe it is doing that quite frequently at the PRUH.

As a part of MACA, I read that Royal Marine troopers have gone through specialist training to help the fight against COVID-19. They are on standby to deploy across the South-West of England to support frontline NHS workers. However, forty Scots Guardsmen were also deployed to help provide another 200 extra beds at St Mary’s Hospital on the Isle of Wight.

Gurkhas from 247 Gurkha Signal Squadron, part of 16th Signal Regiment have spent 10 days training with pharmacists on how to conduct COVID-19 testing at Edgbaston Cricket Ground in Birmingham. And similar training for the Military is are taking place in Manchester and Glasgow so that they can help monitor frontline health workers.

I understand too that specialist military planners have been set aside to support public service, authorities and emergency services at a local level. About four officers have been attached to the London Resilience Group (GOLD level) which coordinates with Bromley Council.

The specially set-up Military Aviation Task Force is providing a dedicated helicopter capability and they are operating 24 hours a day. I have seen military helicopters flying over my garden and assume they are on NHS missions. I know that three Merlin Mk2 helicopters and their crews from 820 Naval Air Squadron at RNAS Culdrose have been set aside for MACA, providing assistance to the NHS and South Western Ambulance Service. Their aircraft are also being used as transporters, moving both supplies and personnel. For their part RAF helicopters are also being used wherever they can help by either transporting people or supplies. For instance, in March an RAF helicopter evacuated a person suffering from Coronavirus from the Shetland Islands to Aberdeen.

The final activity I want to mention is the Military’s assistance in tackling on-line misinformation which is also crucial in the Coronavirus battle. A team from 77 Brigade, an organisation of specialists in Cyber Warfare and based at Denison Barracks in Hermitage, Berkshire has been attached to the Cabinet Office Rebuttal Unit. This group is helping to identify and tackle fake on-line news about the pandemic and is setting its sights on an increasing number of fraudulent phishing scams.

On Day 59 of shutdown I believe it timely to pay tribute to the military support we have all had during this crisis – especially as we rarely see evidence of it ourselves. It somewhat surprises me though when people suggest that helping out society in crisis is not really the job of the armed forces. That’s tosh. To be honest I never heard that said when I was serving in the Army. The answer is of course it is. The basic mission of the armed forces is the defence of our country. Right now, that is exactly what the Military are doing.

I will end by thanking the Armed Forces for their great help and by referring back to the comment made by Second Lieutenant Ralph Madden. He told me that he didn’t expect it would be too busy that day (last Saturday) but the Military really expected huge involvement when mass testing of everyone would be required. We are likely to see a great deal more of our great Service men and women. It is clear the they will be back!