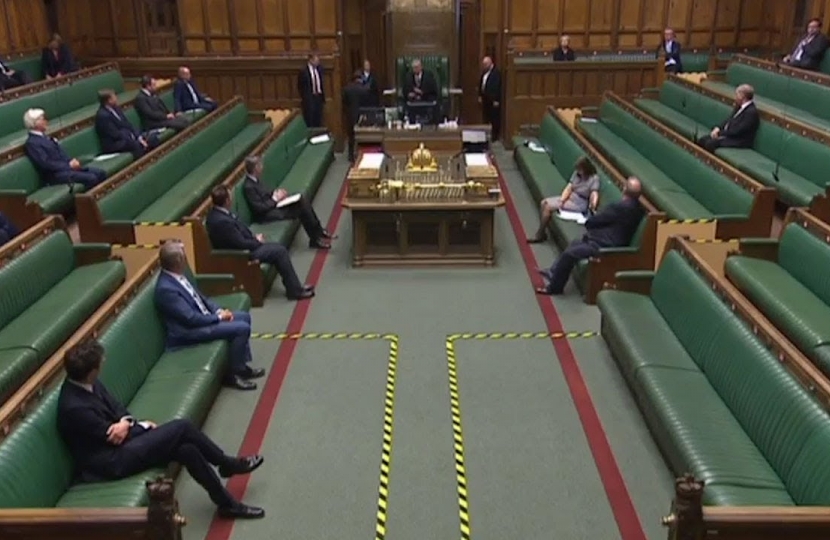 The House of Commons is sitting (not)! Well a handful of MPs socially distancing might be but the vast majority dial in from their homes right across the country. But only a small proportion of the Legislature (that’s Backbench MPs like me) have been able to remotely question the Executive (the Cabinet and other ministers). Parliament kind of works but is insipid in comparison to normal.

In order to ask a question of a minister I have to open up something called the Members Hub on the Parliamentary website. Dates when ministers will answer questions in the House of Commons Chamber are announced well in advance. So, to ping a minister I type out a question I want to ask when their Department has to come to the Despatch Box. My question then goes into a ballot and I might or might not be one of the lucky ones. So far, not me, I have been unlucky every time.

But I have watched the ones who do get a question. Unless they are among the 50 people allowed into the Chamber (provided they are scheduled to ask a question mind) those asking a question appear on screens positioned around the Chamber. They put their question from home. But there is no hum about the Chamber when they do. Instead there are gaps and awkward pauses. The whole place has the fizz of a dentists’ waiting room! MPs, on screen from their homes, tend to look a bit lifeless however hard they try not to be so. There is no spirit, mood, any sort of spontaneity about the process.

Ministers too are uncertain as to which way to look with their answers. It works much better for them if a question is put to them by one of the MPs in the Chamber. They can operate as normal. But when questions come in remotely, they are far less certain what to do - often replying looking up at the cameras. That makes them seem to be staring into space. I suspect they too miss the atmosphere of the crowds even if the current system gives them an easy ride.

Mr Speaker Hoyle (I’m a big fan) and his deputies have no stroppiness or cat calling to deal with either. They simply stand up and announce who’s next and then sit back and watch what happens.

Currently there are no debates taking place in either the Chamber or Westminster Hall (its off-shoot). So, MPs find it impossible to try and bring local problems to national attention by use of an adjournment or Westminster Hall session. Parliamentary activities are really constrained to only three matters; set question periods for ministers, urgent questions and statements made by departments (a Secretary of State or one of his or her ministers). I’ve tried to get in for a question, urgent question and statement but alas no chance lad!

But I have a real and pressing concern which is more than the fact that I cannot get heard in what seems rather a hollow parliament. Now, for me, information about what is happening comes almost exclusively from the newspapers, radio, TV and from on-line.

But my job involves much more than just keeping up with what the media is saying. I should be in amongst what is happening and understand the reasons why such and such a thing is occurring. In particular I want (and need) to know what ministers and their departments say they are doing. For me that comes along with a vibrant, humming and functioning parliament.

True I get letters (by e mail) from ministers telling me what they are doing. These information messages are colloquially called ‘Dear Colleague Letters’ (a bit yuck). True they do give me something but only what that minister wants to make public. I accept its better than nothing but it is unlikely to satisfy me when I have a particular local problem or a constituent needs some fast help at ministerial level.

Sideling alongside a Government minister, say in a lobby or the corridor, and putting my point across really does work and has done so frequently for me over my 10 years at Westminster. I have directly helped constituents with problems that way.

When Parliament is working normally, corridors are full, the Chamber has a decent showing of MPs and ministers cannot escape being bearded by people like me. From the Prime Minister downwards, unless for a very good pre-arranged reason, all MPs have to be present for votes. That is excellent; they are easy to nobble then. Alas for old fashioned voting though.

For obviously good reason, the voting arrangements have also changed thanks to Mr Coronavirus. Over the last two weeks MPs have had to rehearse and rehearse again how we can vote from home via the ubiquitous Members Hub. It’s a simple system. The whips (MPs whose job is to try and ensure I vote the Government way!) pre-warn us when a vote will be taking place as well as what way the Government wants us to vote. Then in a 15-minute window I am meant to log on and press ‘Yes’ or ‘No’ on my screen. Thereafter my vote is cast. For real and the first time I cast my virtual vote four times last night between 5.30 – 7 pm. It was a painless exercise but boy was it soulless!

In accordance with Parliamentary instructions I haven’t been to Westminster for almost 2 months. Friends who have tell me it is like a ghost ship. There are very few people there. This virtual parliament lacks the oil - as in MPs - to make it look fit for purpose.

MPs need to be at Westminster and actually the country requires us there too. We need to do our job of supervising what the Government is up to day to day. Just because I am a Conservative and we have a Conservative Government does not mean that I would not vote against something I felt to be wrong. Whatever some who don’t like my politics may think, I am not a robot! I promise that.

Right now, Parliament operates with the panache and excitement of a striking slug. I long for the old days with all that spirit, debates, disagreements, screw-ups and challenges (2 months ago?). That is how our particular brand of democracy works best. At the moment the Mother of all parliaments is limping; I accept with good reason. However, like the country, the House of Commons needs a decent COVID-19 exit plan too. Death to the present virtual, anonymous, spiritless Parliament - as soon as possible please.