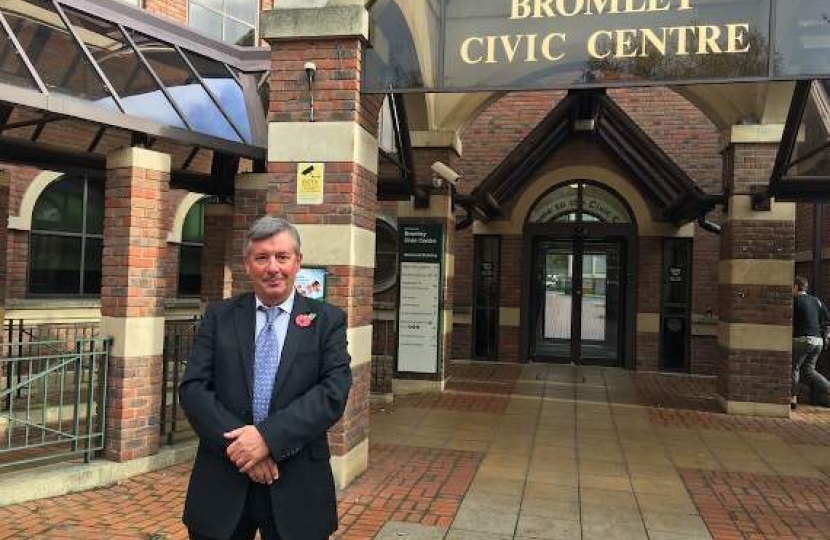 Yesterday at 11 am I took part in the now weekly Bromley Situation Briefing led by the Leader of the Council, Councillor Colin Smith (photo) and the Operational COVID-19 Leader, Chief Executive Ade Adetodsoye. Other Bromley Council departmental heads were present on the tele-conference too.

The briefing is specifically for local MPs to keep us abreast of what is happening in our local government over which, of course, we have little say or power.  I picked up quite a few interesting developments and felt that people may wish to be given a heads-up on them if they did not know already.

Let me start by writing about support for local homeless families and rough sleepers.

The Council is also working hard to stop anyone being evicted both now and when the crisis ends.  Bromley has set-up a system where people worried about where they will be able to live can be dealt with on-line.  However, if this is not possible then there is a skeleton staff operating in the Civic Centre for walk-ins.  Bromley Council staff have contact with everyone in temporary accommodation on at least a weekly basis.

Normally there are between 4 – 6 people around the Borough who can be defined as rough sleepers.  At the moment though that figure has risen to 16; perhaps because other rough sleepers have moved into the area.  Regardless of numbers though every Council has a statuary duty to house rough sleepers - if they want it.  All 16 of them have been given accommodation locally and they have all accepted that offer. We are likely to have some fairly poor weather in the next week so I am very pleased to know that; normally some rough sleepers, for various reasons, refuse to accept help.

Next, we covered shielding vulnerable people and volunteering.

The Government has published that there are 4,170 vulnerable people in Bromley Borough who must be shielded and protected. Those numbers are compiled by returns from GPs who have sent names and addresses up the Health Service chain.  In addition, 844 other people, not classified in that Government list, have asked the Council for help.  On the other hand I was told that there are 4,200 local people who have volunteered to help those in need of assistance.   Community Links Bromley is leading and advising on just how to do this.  I gather that of the 4,200 volunteers, 783 volunteers have been mobilised and are now actively assisting locally.  Thank you so much to all of them.

Those on the Government Shielding List are all given food parcels directly from Central Government.  If they wish it much the same deal is offered to the 844 others who have asked for help.  These food parcels are free.  But, more and more, supermarkets are delivering as a priority to the vulnerable and so the need for food parcels is diminishing.

Testing for Coronavirus is on the up and up too.  Some people have gone to the O2 or Dulwich for this but the Council is working with GP practices so that they are going to places like care homes and test in situ.  Obviously, those working in the NHS and care homes are a priority but next come other key workers.  I gather there is a possibility of an Army run pop-up test centre, maybe, established in a place like Norman Park.  But such a decision has not been made yet.

By the way current testing simply determines if you have Coronavirus or are carrying the infection.  It does not identify whether you have had it or are immune to the virus.  That is obviously a limitation but the tests we have are better than nothing as obviously, if you don’t have COVID-19, you can work with the vulnerable or indeed go back to other jobs.

The Council thinks that bulk provision of PPE is now working and feel pretty confident that there is enough arriving and being distributed.

I would like to write a few words about waste collections too; as I have had quite a big e mail post bag on this one.  Please note that it is a local government matter. As a national politician I have little power or influence over its operation in the borough.  But I do keep myself aware of what is happening.

There is good news here.  Although it is possible there may still be some hiccups, waste collection from homes is meant to be back to normal now.  So, people should simply put out their waste as they did before the crisis and on the planned days.

Other good news is that the Government has no problem with waste management sites such as at Waldo Road or Churchfields Road being opened again - with strict social distancing rules being applied.  That means that entry will be restricted; for instance, 6 cars at Waldo Road rather than the normal twelve.  However there may have to be an appointments system – booked on-line – to visit the recycling sites to avoid huge jams.  A booking scheme is being planned and, with luck, Waldo Road and Churchfields Avenue could be open this week or early next.

I will end by a few facts about money.  To date Bromley, acting for the Government, has paid out £23.9 million to local businesses. That is one heck of a lot of money.  I know there are still quite a few problems with applications and payments but that is the amount already put into local business bank accounts. The Government is backing these payments but COVID-19 has cost Bromley Council about £34 million to date; money that it may not get back.

Finally, may I end by saying a big thank you to Bromley Council, the councillors and local government staff. When things go right – most of the time – in truth, little is normally said by way of thanks.  But when things go wrong, my goodness there is often one heck of a lot of complaints.

I think we must all be aware that, since the Second World War, Bromley Council has never been challenged as it has over the last few months.  On behalf of all of us who live locally thank you so much to all who work in and from the Civic Centre - salaried or volunteers.  I think we are very lucky to have such people.