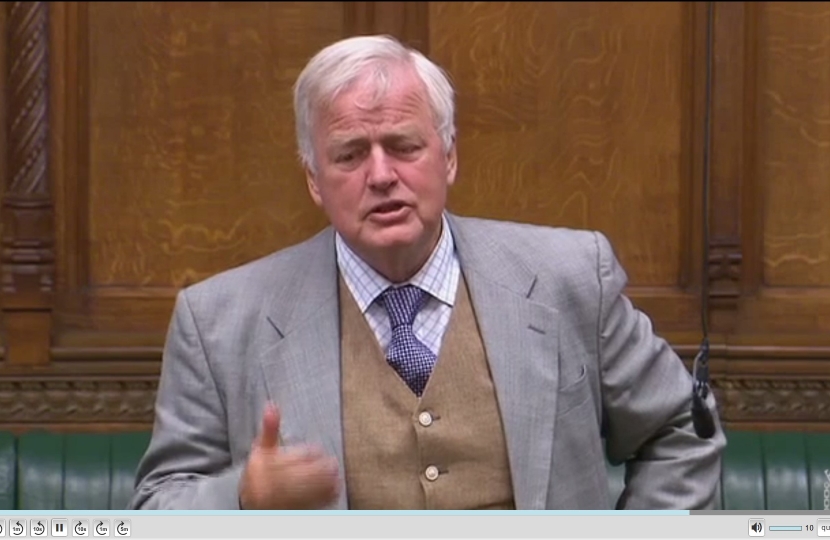 WHAT MIGHT A NO DEAL BREXIT MEAN TO US?

When the Referendum took place on 23 June 2016 we were asked one simple question; did we want to remain in the European Union or not?  The answer was ‘No’ - by a margin of almost 4 per cent across the country.  In the constituency of Beckenham that margin was much closer with those that wanted to remain being just more than those that wanted to leave (but less than one per cent).  My postbag confirms this too.  On BREXIT about half of my constituents argue that we should scrap the Referendum result and stay in the European Union whilst the other half ask why we are simply not leaving immediately as directed by that result.

Since June 2016 the negotiations to leave the European Union have been hugely disappointing as far as I am concerned.  Our negotiators have bent over backwards to make a deal with Brussels and such efforts are not reciprocated as the other side believes (with some justification) that the British Government seems not to want to leave; so not one single concession of substance has been made.

I have negotiated many deals myself – admittedly they were mainly ceasefire deals in the Bosnian conflict when I was the British UN Commander there – but the principles of bargaining are much the same.  But one thing I realised is that in arbitration you must start with a clear idea of what you want, with red lines that are clear and a determination to negotiate well.  To do otherwise is dangerous and looks weak; indeed it could be interpreted as capitulation.  We seem to have offered so much to the European Union and it has offered back - precisely nothing.

We saw this when our then Prime Minister, David Cameron went to Brussels to get some concessions which he could then sell to the British people to convince them to stay in the European Union.  He achieved nought and returned with no concessions because the European Union thought that neither Mr Cameron nor indeed the British people would vote to leave.  On the latter point Brussels was clearly wrong by almost 4 per cent.

Thereafter it has been much the same story.  The European Union believes Mrs May is so desperate for a deal that she will accept one at any price.  But that price seems mighty high to me if the deal we have on the table is it.  I totally understand why Brussels is so against the UK leaving the European Union.  We provide about 1/6th of its income and already it has real problems balancing its books.

To me it now seems the choice is to agree Mrs May’s proposals or accept there will be no deal and we simply leave the European Union on 29 March 2019.  That was and remains the date, enshrined in law, when we leave the European Union.  Actually there is no time before that for anything like another referendum or indeed more negotiations of substance.

So what does a ‘No Deal’ BREXIT look like?  I will pose 6  scenarios as follows.

1.   We would not be subject to European Union regulations on trade and we would automatically have to do business according to World Trade Organisation rules. We trade according to them already – with countries such as the United States, Japan, China, Brazil, Australia, New Zealand and South Africa.  That  seems to work well enough as things stand too.  Right now, of course, such countries pay a fairly healthy European Union tariff to trade with the UK and that will go so it is certainly in their interest for us to leave.  For our part we could simply state that there would be no tariffs on European Union goods coming into the UK.  It seems to me that there is no need for legislation on such a decision and it makes sense.  It is also in the interest of European Union nations to reciprocate as they export to us double what we send to them.  Standards on goods exchanged between UK and the European Union would be much as now or in other words much the same – at least in the short term.

2.    As the Prime Minister has already declared, European Union citizens living here now would have the right to stay, work, get benefits like the NHS and pensions here and, if they wish, after a while, become British citizens too.  That works already for many.  My own children currently have three European Union nationalities; British, French and Swiss.  With regard to new people coming into the UK from the European Union that should be acceptable too; with certain conditions such as coming for work and not welfare benefits.  Of course, we would expect the same for our citizens in Europe too.

3.   We would not pay much of the so-called divorce bill either.  That is assumed to be about £39 billion which is well in excess of the annual Defence costs.  Of course, we would need some negotiations on property and liabilities – both in the UK and on the Continent.  That is not an urgent matter but would need sorting at some point in the future.  Maybe there is a trade-off here too.

4.   Assuming the European Union was to impose tariffs, the very most it could charge would be about 4 per cent.  According to the Office of Budget Responsibility the European Union could charge the UK about £19.2 billion annually for membership of its club.  But this is reduced by the Thatcher rebate (£5 billion) and monies sent to the UK for matters like farm subsidies, universities and flood protection (£5 billion) which takes our annual donation to the European Union down to about £9.2 billion every year.  That works out at about £175 million a week (the cost of a new hospital perhaps?).  One hundred and seventy five million pounds a week is also the equivalent of a charge of about 7 per cent tariff on all our goods exported to the European Union.  So tariffs may indeed work in our favour – in addition to the fact that the European Union would perhaps pay twice as much in British tariffs as the UK as it exports twice as much to us as we send to Europe.

5.   There’s no need on the UK’s part for a hard border with the Republic of Ireland.  I ran a border crossing point at Auchnacloy in South Tyrone, Northern Ireland for 2 years once and know that using systems like Trusted Trade arrangements’, Pre-Registration documentation and cameras with vehicle number recognition features, there is absolutely no need for a hard border. Recently l have heard border/customs experts from both Sweden and the Netherlands give evidence to the Northern Ireland Select Committee (on which I sit) to the effect that a frictionless border between Northern Ireland and the Republic of Ireland is absolutely possible. Perhaps the UK wouldn’t be imposing tariffs on European Union goods, so there would be no dues to collect anyway. I am sure some changes may be needed but as I have already stated technology allows for smart borders.  By the way for a very long time (even before we joined the European Union) Irish citizens have had the right to live and work in the UK – as well as join our armed forces by the way.

6.  Many argue vigorously that a deal with Brussels is crucial but I wonder whether they are right on this.  They suggest a No Deal situation could be catastrophic for us.  They suggest long queues at ports and airports, devaluation of the pound, gridlock on the Northern Ireland border, re-location of investment and businesses abroad and hoarding of medicines might be the result.  Such suggestions were made prior to the Referendum but that certainly didn’t happen.  Actually employment, investment and economic growth rose and not the reverse so I suspect such dire warnings could be erroneous.

In summary, the UK has always had a global outlook and that alone has always caused tension with Brussels.  Outside the European Union we could trade with whoever we liked – properly, of course, in accordance with trade deals or on World Trade Organisation rules.  Personally I think too many people currently are talking Britain’s future down.  I disagree with them absolutely.  Whatever the situation – deal or no deal – we will (and must) make our divorce from the European Union a success.  I think we will too.  We are lucky to live in such a great country as the United Kingdom.