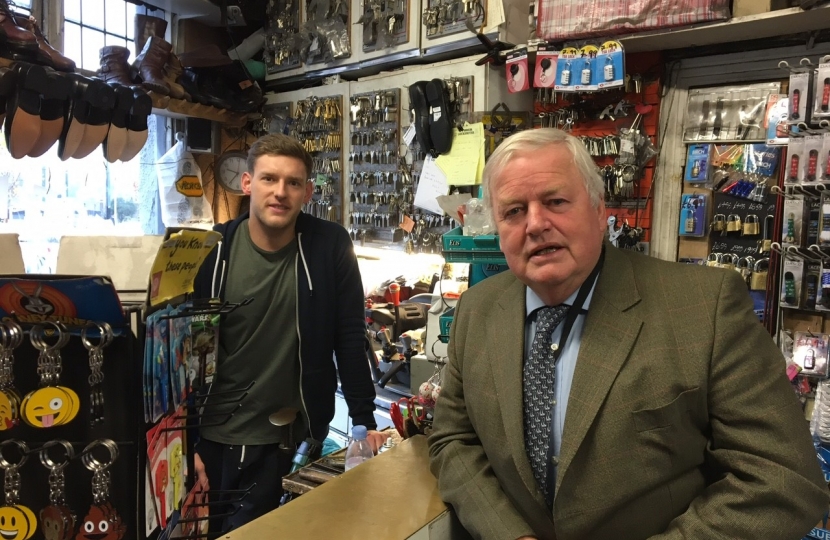 Today I started standing in Elmers End (Tesco Car Park) and then went into Beckenham.  At Beckenham Junction I popped into Godfrey’s Shoe Repairs (where I always get my own shoes fixed) and where I was photographed with Luke Godfrey.  After lunch I went canvassing in Coney Hall.  The subject of social care for the elderly came up several times as well as in some e mails I have received too so let me give my take on it.

The forecast is that we will have 2 million more people over 75 years old in the UK within 10 years.  That will squash our care system and we must find a way to pay for the huge number of the elderly who, of course, we must support.  People I have met campaigning recognise this fact and that we must find a way to deal with it. That is what Mrs May is trying to do whatever the fandango over what has or has not been promised over the couple of weeks or so.

Right now, many people with assets are already paying a great deal for residential care and for care whilst staying in their homes.  Many people have to sell their houses too.  Under this system you could lose almost all your life savings as well as having to sell your home (down to £23,250) to pay for care. I don’t think many people not yet affected by that realise this is the current system.   Personally, when my mother died, she was in exactly that situation.  After funeral costs and legal fees about £18,000 was left and my mother, bless her, bequeathed my brother, sister and I about £6,000 each. She had had to sell her home to pay for her residential fees and she was very unhappy about that.  I don’t blame her and personally I felt guilty that we had no choice.

However, under the proposed system there will now be a cap on how much people would have to pay for their care – at home or in a residence. I don’t know what that cap would be but the Dilnot Commission a few years ago recommended that it might be in the region of £72,000. That seems fair to me.   Anyway, the cap, whatever it turns out to be, would not be charged until after the death of a person, or both partners, if they shared a home.  In essence relatives or anyone benefitting from estates will divide whatever is the worth of the estate, less the £72,000 charge, between them.   In addition, the £23,250 worth of life savings that people cannot lose if they have it will be more than quadrupled to £100,000.  So, assuming your total assets were, for instance, £150,000 and your care fees cost £70,000, the government could only charge £50,000 taking the estate down to £100,000.

That is so much better than how things operate now and, assuming my assumptions are right, I would be very happy with such a system as it would work well for people who live in Beckenham.  My final point is that the other parties are simply burying their heads in the sand on this one – ignoring the facts.  That is a real abrogation of responsibility.