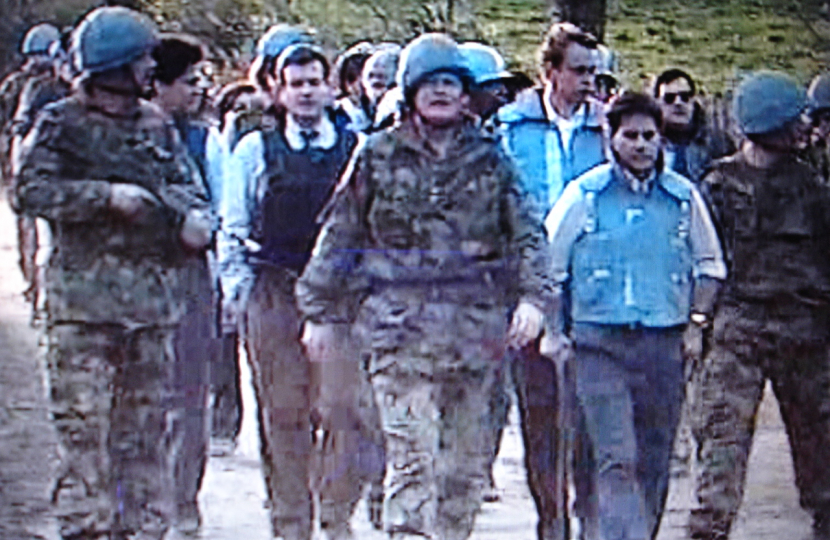 As British United Nations Commander in Central Bosnia I found a massacre site at a place called Ahmici on 22nd April 1993.  Over one hundred Bosnian Muslim civilians – mainly women and children -  had been murdered there.  Immediately I considered it to be genocide.  It was formally classified as such later by the United Nations too.  But at the time I did my very best to let the World know what had happened by publicising what I had found in the international media.

Two days later the Security Council of the United Nations, on a trip to Bosnia, visited my headquarters.  I had requested that they might do that as I knew they were in Sarajevo at the time.  After a briefing I showed them the massacre site and some of the bodies still stuck in the debris at Ahmici.  Some were immediately sick which was predictable.  It was a foul situation.

I recall asking the visiting President of the Security Council, Ambassador Diego Aria of Venezuela, whether the United Nations might establish a war crimes tribunal to deal with such atrocities as I felt pretty sure those responsible for the massacre would escape justice otherwise. The attached photo shows Diego Aria and myself at Ahmici.   The Ambassador certainly took the point and, whether I was influential or not in the decision, the International Criminal Tribunal for the Former Republic of Yugoslavia (ICTY) was established less than a month later.

Personally, from 1997, I also gave evidence at the ICTY.  I did so in four trials involving five men. Those accused were sentenced to long prison sentences; ranging from 15 to 45 years.  The massacre and experience of giving evidence at the Tribunal unsurprisingly had a deep impact on me.

So, on Thursday 24 February, during a Statement on Ukraine being made by the Prime Minister, I reminded the House of Commons that we must make it perfectly clear to anyone taking up arms in Ukraine that the World is watching how they act.  To that end I put a question to the Prime Minister:

Bob Stewart   “I have given evidence at four war crimes trials. It was with genocide and crimes against humanity that those people had been charged. May I ask my right hon. Friend and the House to agree with me that any Russian who kills a Ukrainian must remember that one day they may well be brought to court for crimes against humanity or genocide?”

The Prime Minister  “Yes, and not just any Russian combatant, but anyone who sends a Russian into battle to kill innocent Ukrainians.”

Later in the Statement the Prime Minister added to that by saying: “We are working on setting up a particular international war crimes tribunal for those involved in war crimes in the Ukraine theatre.”  I hope though that we will not see ‘genocide’ as such  in Ukraine.  Genocide is the deliberate targeting of a set of people because of their race or religion.  I feel certain that will not happen as Slavs are fighting Slavs.  However I definitely think that war crimes will have occurred or be about to happen.  They are almost inevitable in such a conflict.

What is a war crime?  Well here are some instances I witnessed myself in Bosnia:  I saw villages and towns full of civilians being shelled by artillery; fathers, mothers and children lined up and shot outside their houses; and even one person crucified and then shot (I believe) on a barn door.  I am pretty sure already that war crimes are happening in Ukraine as I write; not least the shelling of towns or villages filled with civilians.

Personally I will do all I can to ensure that anyone who commits a war crime in Ukraine is held to account sooner or later.  I will also try to ensure that the ‘particular war crimes tribunal’ mentioned by the Prime Minister is set-up whether it be in this country or as part of the United Nations under whose wing it should really be established – maybe as a part of the International Criminal Court at The Hague.