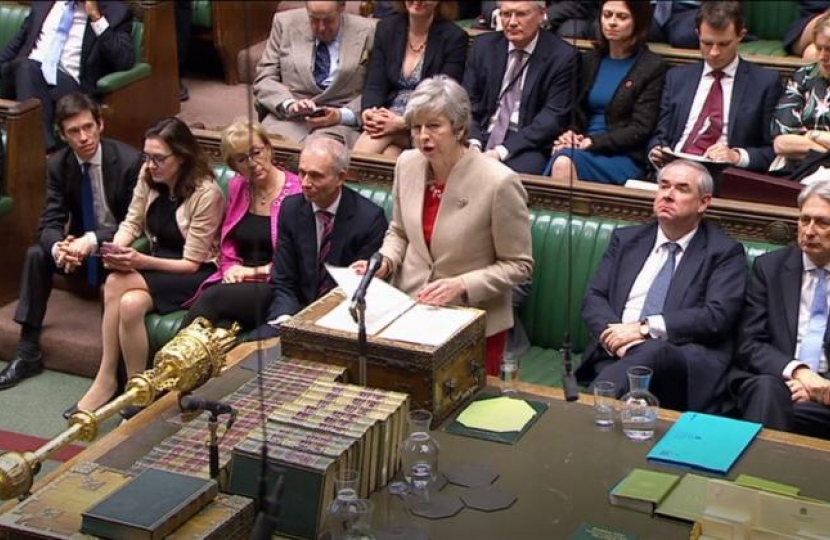 Every Conservative and Labour MP in the House of Commons was elected at the last General Election on a mandate to leave the European Union in accordance with the result of the verdict of the 2016 Referendum. That was straightforward. It was a clear promise and directive as far as I was concerned when I was re-elected in 2017.

In the 2016 Referendum the total of votes in the wards in my constituency of Beckenham were almost equally divided with less than one per cent between remaining and leaving the European Union – the small lead being with remainers. But the country had decided to leave by more than that - about 4 per cent. Whatever I voted in 2016 locally the country overall had made its mind up and had given Westminster its answer.

Once signed the Government went into the process of negotiating our withdrawal by that date. It was not well done to say the least. But in consequence Mrs May produced her plan, the so-called Draft Negotiation Agreement.

I have to say that I did not like it at all for two principal reasons concerning something called the Back Stop. Firstly, the Back Stop did not include a final date when we can leave the European Union but instead left that decision to future agreement amongst 27 other members who undoubtably have an interest in keeping us bound into the Union. Secondly, the Back Stop separated out Northern Ireland from the rest of the United Kingdom keeping it within the Customs Union and Single Market whilst the rest of the UK would be out of it. These are big problems for me because I felt we might thus be stuck connected to the European Union rather than make a clean break.

Mrs May put her deal to the House of Commons, once, twice and now three times. It was defeated three times. I voted against it on the first two occasions but on the third reluctantly agreed to vote for it because there seemed to be no other plan on the table and no-deal was not an option (voted against too).

Mrs May’s deal would at least start the process of leaving and we would be launched on BREXIT, all be it imperfectly. To use an analogy. We would be on a train that has left the station and we could not come back. On the other hand, if Mrs May’s deal did not succeed we could argue backwards and forwards for months, even years, about leaving the European Union. The Public, already angry about Parliament not solving this matter, would be furious. Many in Parliament would use this procrastination to get what they want – remaining in the European Union.

Because of all this fandango in Westminster over the last two months or so Mrs May has asked for and had agreed an extension of Article 50 until 12 April. By then an alternative plan must be agreed within Parliament. Right now I have no idea what that will be but I am sure of one thing. MPs will not accept a no-deal scenario and I fear they may even vote to agree a long delay to BREXIT with many wanting such stalling to result in us staying in the European Union.

I understand that 80 per cent of Conservative constituencies voted for BREXIT and 60 per cent of Labour ones. Yet the majority of MPs in parliament do not accept that view. Many of them are hell bent on thwarting BREXIT.

Thus my decision to support Mrs May’s very imperfect deal – because it starts us on the road of getting out of the European Union which we were directed to do both by the Referendum and by the last General Election.

To be perfectly honest I am not quite sure where we are going from here. It is certainly unknown political territory. There is more than a chance that in the political maelstrom those in Parliament that want us to remain in the European Union will succeed.

Remaining in the European Union may suit many people of course, including in Beckenham. But equally there are many in Beckenham who are demanding we leave immediately. My mailbox seems to be equally filled by views from both sides!

But any thought of not leaving the European Union does ignore a decision Parliament gave to the British people who gave their verdict by referendum as well as general election. They expect Parliament to enact it. In Westminster we should just get on and do what the people told us to do and fast so that we can get on with other vital matters. Woe betide politicians who ignore the will of the people.