The Vote on 12 March 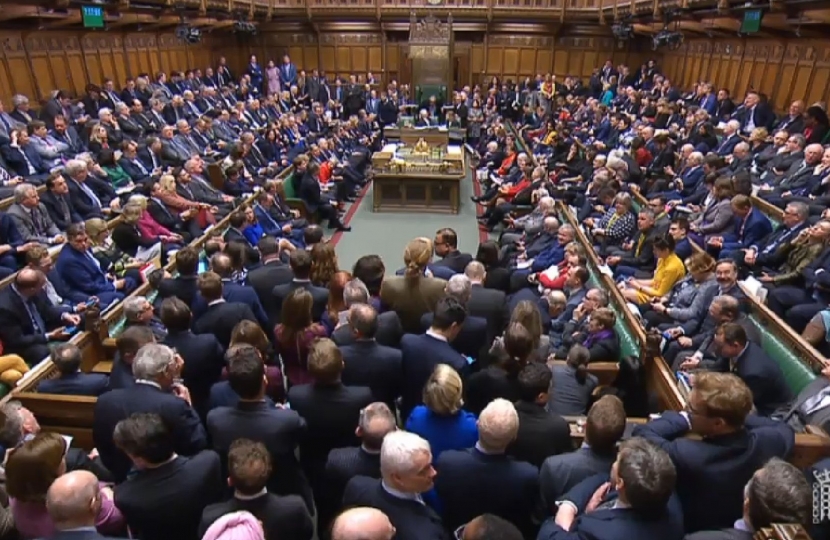 On the evening of Tuesday 12 March the House of Commons voted on whether to accept the Prime Minister's Draft Withdrawal Agreement as amended by some negotiations in Strasbourg the night before. The vote went against Mrs May with 391 Mps voting against the deal and only 242 voting for it. That was a defeat by 149 votes.

Regrettably one of those 149 votes was mine. I really did not want to vote against the Government but I simply could not accept the option on offer. To start with Mrs May's deal fundamentally traps us in EU rules, makes us pay a lot as well, separates off Northern Ireland from the UK and crucially does not allow us to leave should we wish to do so. Everyone was hoping that the changes agreed between the Prime Minister and Jean-Claude Juncker, President of the European Commission the evening before might at least change two crucial parts of the so-called Backstop; separating off Northern Ireland and allowing us to leave the EU when we wanted to do so after a period of time.

I listened very carefully to the Prime Minister when she spoke to the 1922 Committee of Conservative MPs yesterday morning and then to Geoffrey Cox, the Attorney General when he spoke in the Chamber of the Commons. It was clear that legally little had changed.

So I could not vote for an arrangement which was a deal, in my opinion, far worse than we have now as a full EU member where we at least had influence on decision-making.

Today, Wednesday 13 March, we are now to vote on whether we should rule out what is called a 'No Deal Scenario' where we simply leave the EU on 29 March and start to operate on World Trade Organisation rules. Ruling out the possibility of simply walking away is a daft negotiation tactic as it is given up without any compensating concession from the EU and it suggests weakness. I will not be voting to rule out a 'No Deal Scenario' because, to me, as I have suggested it makes no sense but I fear it will be passed.

Tomorrow, Thursday 14 March, I think the House of Commons will be voting on whether to make the Prime Minister negotiate an extension to the time allowed under Article 50. I do not know for certain but feel that vote will be carried too although it requires agreement from all 27 EU members and they could well make us pay with other conditions. Personally I see no point in extending the Article 50 period and I will be voting against it.

So, where are we right now? There is a chance that the EU will 'blink' and agree to change the backstop provisions when the heads of government meet on 21 March. The EU has form there. I hope that happens and I can agree to another amended deal (which sorts out the Backstop) put up by Mrs May before 29 March.

As I have previously said I would like to have a deal rather than a no deal but I repeat what Mrs May has suggested time and time again; 'No Deal is better than a Bad Deal'. I am not sure that the Prime Minister really means that but I do because it is the truth.