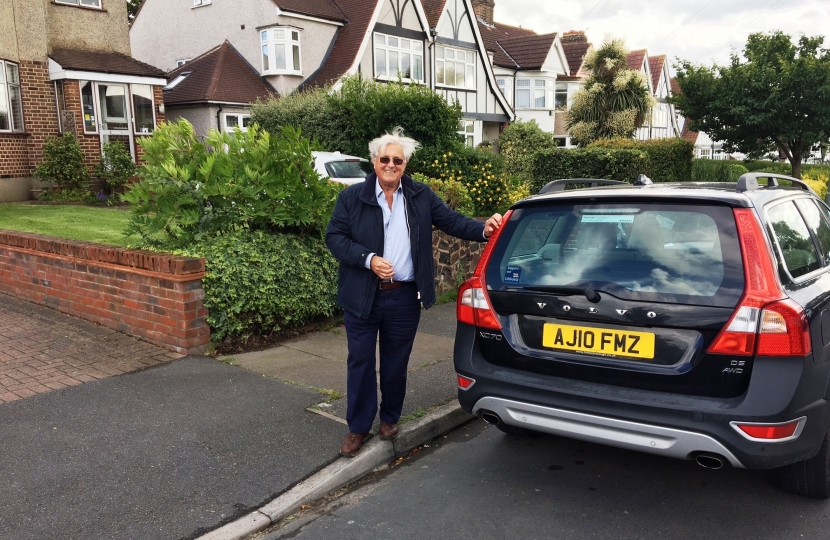 I am conscious that today is the 73rd anniversary of D Day and did pause to think what a tremendous achievement and sacrifice our armed forces made that day. Considering the massive planning that went into that operation and within 18 months I amreassured that we will fix BREXIT to everyone's satisfaction within 2 years too.Today I campaigned at Shortlands Station from 7 – 9am.  It was great to be joined there by five others too; Paul Brown, Kira Gabbert, Aisha Cuthbert, Adolph Williams and Robert Straker.   I am very grateful that they came along – especially as the weather was awful.  Thereafter I went briefly into the office in Beckenham for a conflab.  In the afternoon Tony Power (in photo) and I delivered targeted letters along Wickham Chase and Langley Way in West Wickham.  We just missed the rain too!

I thought I would have a look at why we need to get control of immigration and do so from a topographical point of view; by that I mean the space available in our country.    Apparently, apart from the Netherlands which has had to reclaim vast land from the sea to provide space for its people, England is the most crowded major state in Europe with 419 people for every square kilometre.  By comparison France has 121 persons and Germany 232 individuals for each 1,000-metre square of terrain.

Thus, we in England, have a much denser populated area; nearly three and a half times more people in each square kilometre than does France and almost twice that of Germany.  I gather that to match the density of population we have in England, Germany would need 69 million immigrants and France would need 167 million more immigrants.

As things stand, with current annual immigration, each year we must find living space as well as decent social and health services for as many people as live in the City of Newcastle.  That is a very tall order and one which we simply cannot honestly achieve without huge sacrifices.  A denser population brings increased demand for school, hospitals, jobs and housing which is already in very short supply in England – particularly in the South East.

To date we have not been very successful at getting control of just how many people come to live in our country.  European Union rules have stipulated that anyone from a state within it has to right to come and work here.  That will change obviously with BREXIT.  But equally, this year, as many people came to our shores from outside the EU as from within it.  This we have long had the power to do something about and, honestly, on this one we have failed.  We cannot do so for much longer and this must change.

However, I also know and accept absolutely that we will always require some immigration.  We will need it not just to help the economy but also for decent human reasons (maybe family reunions) as well as for true refugees.  But we must clearly stop the open flood gates of people coming to this country. Bedtween 1997 - 2010 about 4 million people came to live in the UK.  Now we are almost full up.   Unrestricted immigration must be a thing of the past and it is up to Government to grip this nettle.