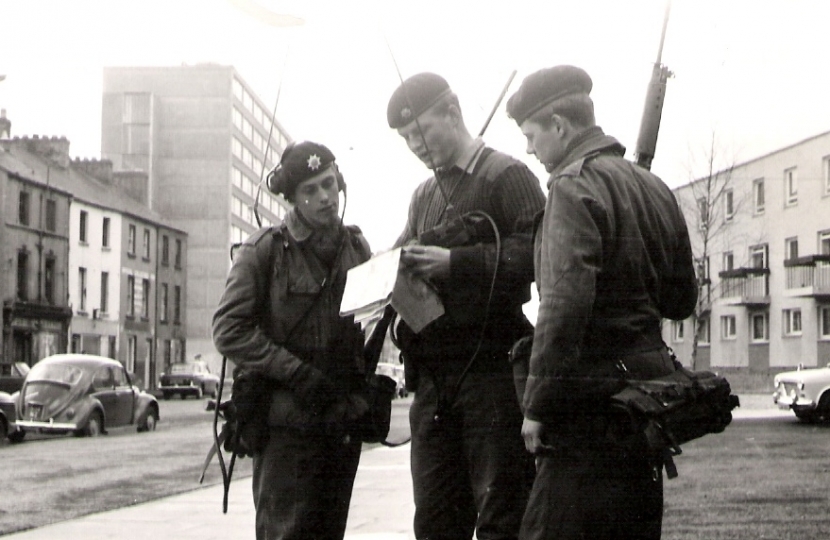 I listened very carefully to the Gracious Speech, and I made the assumption that the promise to address the legacy of the past with regard to Northern Ireland refers to a Government commitment to protect veterans from vexatious and repeated prosecutions. That assurance was solidified when I looked at the media Q and A that accompanies the Queen’s Speech, where it is put much more specifically. My good friend the Minister for Defence People and Veterans also promised this to me in the Chamber on 21 April, and now I expect it to happen.

Privately, I have been assured from a very high level that such action to help veterans and indeed other members of the security forces is imminent. I hope so because, honestly, it is a matter of huge importance to me.

I speak as a supporter and a member of the Justice for Northern Ireland Veterans campaign. Personally, I served over three years on operations in Northern Ireland. I have been involved in several actions there, witnessed several terrorist murders, and have lost too many soldiers and friends who were working alongside me. I have also held innocent people, caught up in terrorism, who have died in my arms. It devastated me then, and it still does to this day. So to me, this commitment finally to sort out a cessation to legacy vexatious prosecutions is exceedingly personal.

I understand that the new Bill might involve introducing what could be called a qualified statute of limitations, with the presumption that no charges should be brought against security force personnel for alleged offences before the Good Friday agreement of 1998. Quite rightly, this plan is based on the fact that if no new compelling evidence against such people has been brought forward, such a prosecution ends.

Let me be clear: nobody in the military, the police or the security forces supports anyone who breaks the law, and if someone does so, it is right that they face the full vigour of the legal system. That is the essential and crucial difference between a soldier and perhaps a policemen, and a terrorist. The security forces operate on behalf of and under the law, whereas terrorists do not. There is no way that soldier and terrorist should be treated equally under the law—and that must not happen.

I am delighted that, at last, we are beginning to see this matter resolved for a number of veterans, who to this day still dread a knock on the door and being hauled off to Northern Ireland from retirement—many are in their 70s and early 80s—to answer charges for actions that took place many years ago, and which were normally investigated and dismissed at the time.

The recent collapse of the trial of soldiers A and C is hugely significant, as the judge sent the prosecution packing with scathing comments about its case. However, I am worried because the word is that those people who have been charged recently or are in the process of being charged may still face prosecution in the Belfast court.

Having myself given evidence in that court in 1986, when five terrorists were charged with murder, I know that it is not a prospect that veterans face with equanimity—they often say they would much prefer to be under fire. When I stood in court to give evidence for the prosecution against terrorists, I was shouted at, demeaned, threatened and told that my family were dead. That is not something that people like happening to them.

I gather that around seven more trials of veterans are in the offing, with perhaps another 16 more veterans also in the frame for prosecution. I feel that those trials and prosecutions should be stopped in their tracks, and I very much hope that will happen. Perhaps the same logic that sent the prosecution in the case of soldiers A and C out of the court with its tail between its legs will prevail.

We owe our veteran soldiers and, indeed, all the people who tried to preserve peace in Northern Ireland—not just soldiers—a debt. They have lived under the continual threat of prosecution for many years; we should sort it out.

Our Northern Ireland veterans do not want an amnesty. Why should they have an amnesty? They have done nothing wrong. They obeyed the law, often at great risk to themselves, and are rightly affronted when some people suggest that they are just the same as terrorists. They are not—they are most definitely not.

Like me in my time, veterans were sent to Northern Ireland at the behest of predecessors of ours in this place and told that if they obeyed the laws of conflict and of this country, we would look after them. That is exactly what Jim Callaghan, as Home Secretary, said to my own platoon of the Cheshire Regiment in Londonderry during the spring of 1970. At the time, my soldiers, 36 in strength, were reduced by a third, who were in hospital with burns and broken limbs.

Mr Callaghan was seriously shocked by what he saw. He promised me, my men and all our soldiers in Northern Ireland that our predecessors here in this place would look after us as long as we obeyed the law. I think it is time that we honoured that pledge given by the Home Secretary 51 years ago.