Remembering the Hyde Park Bombing of 1982 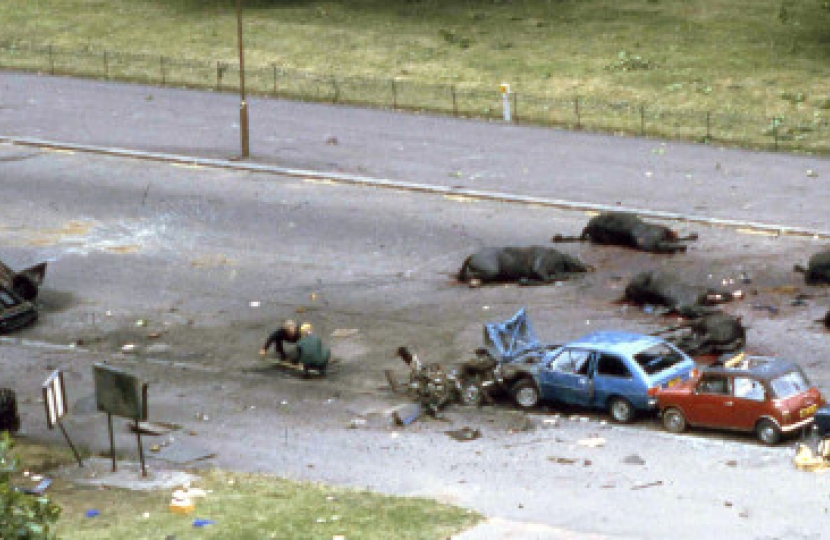 On Thursday 27th March Bob contributed to a debate in the House of Commons which lamented that John Downey, a suspect in the Hyde Park Bombings which took place on 20th July 1982, had been allowed to walk free because of a mistake made by politicians and the police in Northern Ireland.  His speech is detailed below.

Today, we are talking about events in London on Tuesday 20 July 1982. In particular, we are debating the consequences of an explosion—about 20 to 25 lbs of high explosive was packed with nails to cause maximum casualties, and hidden inside a Morris Marina car—in South Carriage drive near Hyde Park. It was placed there by the so-called “England Department” of the Irish Republican Army, and the bomb killed four members of the Blues and Royals as they rode to change the guard on Horse Guards.

Apparently, John Downey, who was arrested at Gatwick in May last year, was a leading operative of the so-called “England Department” of the IRA. Yet he felt he was immune from prosecution, because he had in his possession a letter saying that he was not wanted by the Police Service of Northern Ireland, which appears to have been issued as part of the bargaining between the authorities and terrorists during the Northern Ireland peace process. When the letter was issued to Downey, the authorities either missed the fact that Downey was wanted on a 20-year arrest warrant for his alleged part in the July 1982 Hyde Park bomb, or they decided to ignore the fact.

I totally understand why so many people are utterly dismayed by the fact that a suspect for the murders of four soldiers by IRA terrorists has apparently been granted immunity from prosecution. To my mind, it was an extraordinary mistake by both politicians and police in Northern Ireland. All of us here today in Parliament should send a clear signal that murder is murder and those responsible for it should face the full rigour of the law.

I remember 20 July 1982 extremely well. At the time, I was a company commander serving in Northern Ireland; unknowingly, I was also only six months away from being directly involved in a similar atrocity at Ballykelly, where I personally lost six soldiers killed by terrorists on 6 December 1982. It has had a tremendous impact on me.

In the Hyde Park bombing, there were not just four deaths, but 31 other people were wounded. Seven horses were killed and several others hurt. Some older Members may remember the heroic Blues and Royals horse called Sefton, who became something of a national hero for making such a great recovery after the incident.

To their immortal memory, like my friend the right hon. Member for Belfast North (Mr Dodds), I remind the House of the names of our men who were killed in this atrocious barbarism.

Lieutenant Anthony Daly was aged 23 and had been married only 27 days before he was murdered. I gather his mother was waiting at Horse Guards to proudly watch her son carry out his duty as escort commander. Corporal Roy Bright, aged 36, was carrying the standard. A senior soldier, Roy did not die at the scene but in hospital three days later. Trooper Simon Tipper, aged 19, died on the street. He had been married less than a month and must have been looking forward to a great life with his new bride. Finally, I must name Lance Corporal Jeffrey Young, who was just a week before his 20th birthday. With his wife Judith, he already had two children, who will never remember their heroic father. He died in hospital a day after the attack.

Neither must we forget—and we have not raised this matter—that the same IRA team, which must have consisted of several people, was also responsible for a second explosion that day. It killed seven Royal Green Jackets bandsmen in Regent’s Park a few hours later. It would be remiss of me not to at least name them, too. Their names, without rank, because it does not matter anymore, were Graham Barker, Robert Livingstone, John McKnight, John Heritage, George Mesure, Keith Powell and Laurence Smith. May their souls also Rest in Peace.

I gather that Mr Downey has at some stage raised horses, which I find somewhat ironic, and I would dearly like to see him brought to trial in whatever way we can. However, I accept that may seem unlikely, but in the meantime, as I have mentioned, there were others in his team. One other person has also been identified and taken to court, but there must have been others in the team that carried out this attack.

Everyone in this Chamber without exception will agree with this: let all who have committed criminal acts in Northern Ireland sleep unsoundly. I very much hope that one day the authorities will knock on their door, wherever they are, and bring them to book.