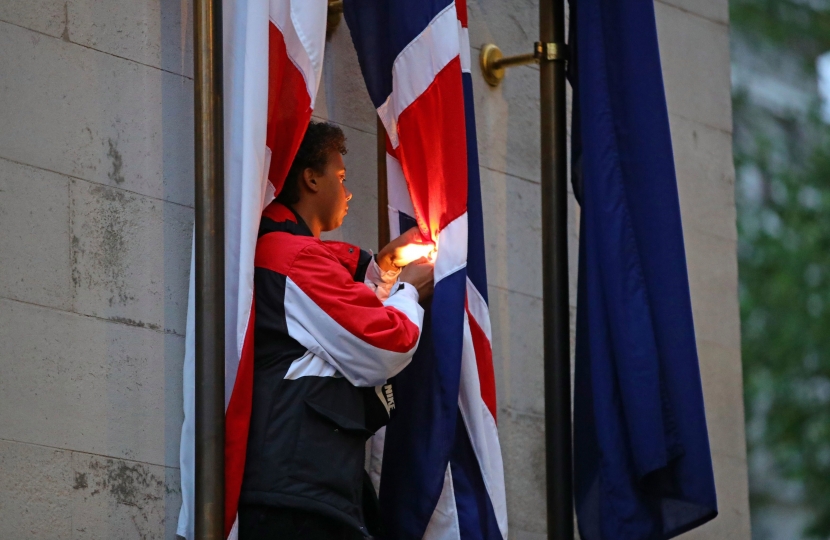 I am now receiving e mails from many constituents who have never contacted me before.  They say they have never felt the need to do so but they are writing in to say that this violence accompanying demonstrations must stop and the Government must act.  I totally agree.  They argue that a small, vociferous minority hell-bent on destruction have to be identified and dealt with under the law.  A lot of my constituents are also pointing out that these demonstrations are breaking lockdown regulations and could lead to an increase in the infection rate in London.  Again, this is probably true.

The vast majority of the British population are truly sickened by policemen being attacked, the Cenotaph desecrated, Churchill’s statue covered in graffiti and a statue torn down.

Normally the majority of Brits are pacific, tolerant and relatively easy-going; believing even that our society can and may even need to take a few knocks occasionally.  But they also believe that, although we may not be perfect, we live in a fairly decent country with laws made for the good of all.

It worries me therefore when I read on the Black Lives Matter (BLM) UK Fundraising site that:

“We’re guided by a commitment to dismantle imperialism, capitalism, white-supremacy, patriarchy and the state structures that disproportionately harm black people in Britain and around the world. We build deep relationships across the diaspora and strategise to challenge the rise of the authoritarian right-wing across the world, from Brazil to Britain”.

From that it seems to me that our democratically elected Government and indeed our economy may be in the firing line.  Thus, the violence outside Downing Street just over a week or so ago during which I was hassled as well as the demonstrations and de-facing of monuments last weekend.

I am afraid that at least a proportion of those demonstrating on BLM demonstrations want to bring down the Government.  My friends in the police tell me that time and time again, at various demonstrations, they see the same people whose aim is simply to cause trouble for the authorities.  They are what we in the military used to call ‘rent a mob’ and their aim is clear; to make a riot.

Across the country BLM demonstrations are also raging against our past history and attacking some monuments to it. Television channels too are cancelling any programme that might in any way be deemed as racist.

If this is followed through, does that mean statues like Nelson’s Column are up for felling?  Apparently, a letter written by the Admiral when onboard HMS Victory shows his vehement opposition to William Wilberforce’s campaign for the abolition of the slave trade.

The probable truth is that prior to the abolition of slavery most notable people in Britain will have had some links to the slave trade.  Are all memorials or portraits of them to be torn down?  I suspect many of the portraits and statues in Parliament and especially the Foreign and Commonwealth Office would be indicted under such conditions.

I am in total support that black lives matter and I also agree that racism is still evident in our society.  It is abhorrent and wrong but some people clearly do remain racist in outlook.  But they are normally misguided individuals and certainly do not represent the vast majority of us.

Last week I was present in Parliament when Kemi Badenoch, Exchequer Secretary to the Treasury and Minister for Equalities, stated that Britain was “one of the best countries in the World to be a black person”.  Some people had a go at her for this but I think she is correct and, just as important, she has the right to say it and not be shouted down.

As a society we may not have got tackling racism entirely right yet but there is no doubt we are trying to do so in all the ways we operate officially.

In normal times BLM marches and demonstrations are most certainly allowed in the UK.  Although right now they are still illegal under lockdown rules.

However, as BLM demonstrations seem to happen regardless, they are too often used as a cover to attack the police and wreck public spaces.  I accept that this may be done by only a small number of protesters but they do so under the BLM banner.  When that occurs, the BLM campaign will start to lose sympathy amongst both its supporters and even more rapidly with the, so far, silent majority of people in the country some of whom are also starting to protest about it to me.