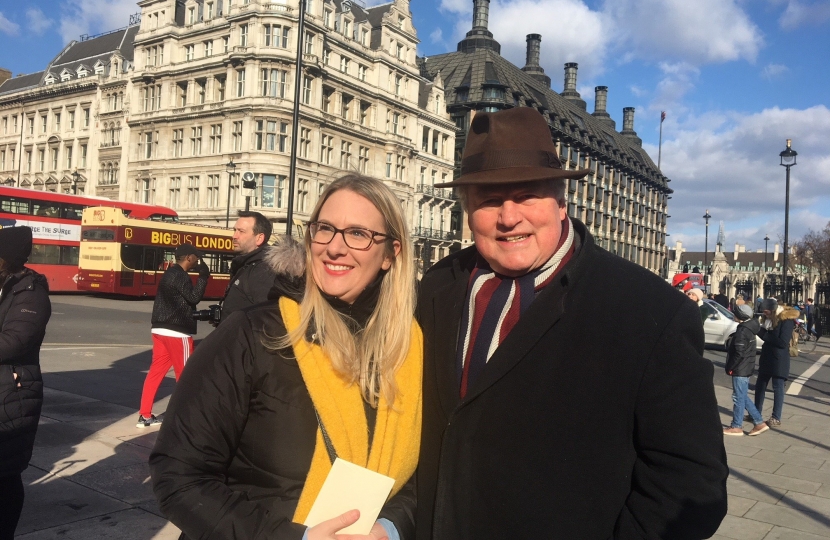 In Westminster Hall today (19 March 2018) I took part in a debate to try and get the drug Orkambi more freely available to Cystic Fibrosis sufferers via the NHS. However, before the debate started I went and met members of the Cystic Fibrosis Trust's demonstration in Parliament Square and was photographed with Trudy Davey, daughter of my friend Maggie Hopgood and also a constituent, whose son Zac has the debilitating condition.

Below is what I said during my speech.

Being born with cystic fibrosis is just the bad luck of the draw. Until I started researching cystic fibrosis to speak today, I had no idea that one in 25 of us carries a faulty gene that causes it. Nor did I realise that people were born with the condition and cannot catch it. The Cystic Fibrosis Trust tells me that about 10,400 people have cystic fibrosis in this country.

That was the case with Trudy and Gary Davey, my constituents, whose son suffers from the condition. Trudy is the daughter of my very close friend, Maggie Hopgood. Maggie’s grandson Zac had the standard blood test just after his birth, and he has been on cystic fibrosis medication ever since—that is for life.

Cystic fibrosis is a rotten condition to have. Most often it attacks our lungs. Sufferers get a mucus build-up in their lungs, and lungs do not work well when they are drowning, but it can be worse than that. Our pancreas is tasked with producing enzymes that break down food in our stomachs, but that organ can also often fill up with mucus, ruining what it is meant to do. Cystic fibrosis does not stop its rampage there. It can also cause diabetes and bone disease. Cystic fibrosis is literally a pain to live with. It is always life-threatening, and it is certainly long-life restricting.

As we have heard, Orkambi is not normally available on the NHS except in extreme compassionate cases. Of course, the reason for that is expense. Per patient, Orkambi can cost more than £100,000 a year. On the plus side, more widespread use of Orkambi is likely to reduce the requirement for hospital treatment among sufferers—there is a spin-off in reduced NHS costs.

The drive must be to reduce the costs of Orkambi. That requires action from Vertex, the US-based company that produces it, and from the Government and the NHS. I gather that negotiations have been ongoing for a while. We are talking about people’s lives and their life expectancy. It must be sorted and it can be.

Hopefully this debate, having raised the matter for the third time in Parliament, as we have heard, will add impetus to the resolution of the problem, and Orkambi will be made more readily available to the many who have sore need of it such as my friend’s grandson.