No Sea Border between Northern Ireland and the rest of UK 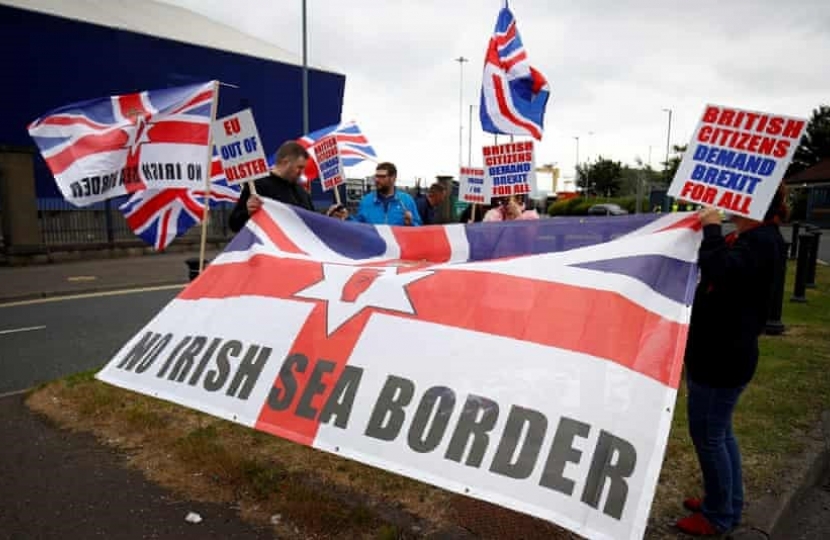 I strongly supported the Government’s efforts last week to force the European Union to enter into fresh negotiations to revise the Northern Ireland Protocol so that it became a more pragmatic solution which respects and upholds the integrity of the British Internal Market.

In essence Northern Ireland has been kept inside the European Single Market to prevent a hard border on the island of Ireland. But the Protocol has created a trade barrier down the middle of the Irish Sea, which, even allowing for the grace period which has been in force since we left the Union, has still led to serious disruption in our economic activity to and from Northern Ireland. In consequence the Province has faced reductions in supermarket product lines, with some 200 suppliers deciding they will no longer sell there.

I am afraid I always thought this would happen when I read the Protocol terms but, at the time, people tended to ignore the warning words, and be grateful some form of agreement had been reached.  But the situation must be changed.

It has caused considerable alarm and discontent within large sections of the community in Northern Ireland who, quite understandably, feel they are being separated off from the rest of the United Kingdom and has resulted in a series of street protests throughout this year. The Protocol is not a viable solution for the simple reason that under no circumstances should we have internal checks on goods moving within the same jurisdiction, in other words between England, Scotland and Wales as well as Northern Ireland . It is an affront to those of us who care deeply about Northern Ireland’s indivisible place within the Union.

Having completed many operational tours in Ulster at the height of the Troubles during my career as an Army Officer, I have always considered Northern Ireland to be very close to my heart. My strong affection for the province and its people made me want to join the House of Commons Northern Ireland Affairs Committee, on which I continue to sit so I watch this matter at close hand.

Alternative solutions put forward by the Government include a scheme for UK traders to declare whether the final destination for their goods is Northern Ireland or Ireland. Meaning if goods were destined for Ireland the United Kingdom would undertake to carry out full customs formalities on behalf of the European Union as a way to keep goods moving as freely as possible. A further proposal has been made to forge a new regulatory approach which accepts both British and European Union standards. This would involve an innovative, hybrid system. Given that Northern Ireland poses a unique set of constitutional issues, I applaud the Government’s determination to find creative solutions.

The European Commission have reacted in predictable fashion by immediately ruling out any prospect of negotiating changes to the Protocol. This unreasonable attitude is not surprising. Ever since the British people voted to leave in the 2016 referendum, the European Union has continued to show a belligerent attitude towards the United Kingdom in a misguided effort to punish us for having the temerity to go it alone without them.  Brussels most certainly does not want BREXIT to be successful; in order to discourage other nations from leaving it.  Our phenomenal achievements in vaccine development and rollout so aptly demonstrated, we haven’t done badly despite that malevolent wish.

In the end, as always happens, a way ahead must come about but as ever with negotiations we may go a roundabout route to get there.