The Need for a Maritime Patrol Aircraft 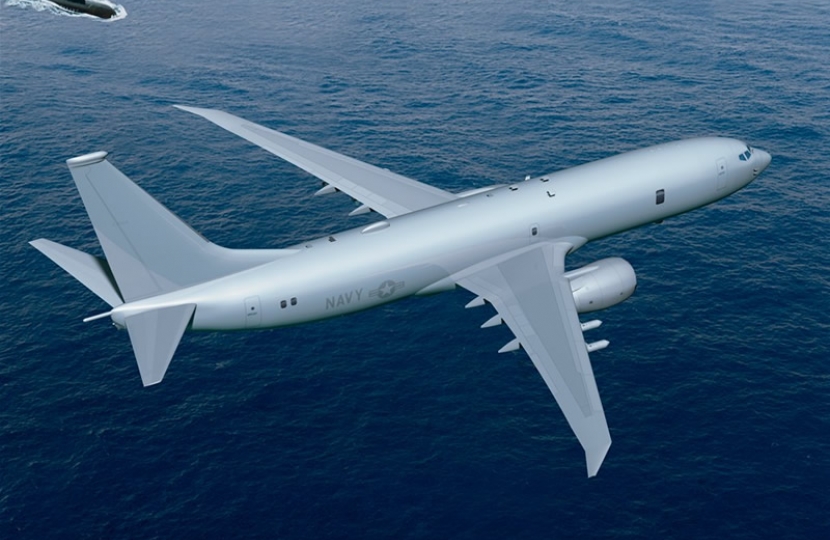 In the Chamber of the House of Commons on Thursday 10 April Bob outlined his very serious concern that the United Kingdom currenty has no Maritime Patrol Aircraft. A tried, tested and top of the range maritime patrol aircraft exists and could easily be procured; the P8 Poseidon Long Range Maritime Patrol Aircraft as illustrated in the attached phtograph.

Bob's speech is reproduced below:

What are our responsibilities under those conventions? In essence, we are required—and we have agreed—to have oversight of 1.25 million square nautical miles of the Atlantic and North Sea. We are required to maintain an operational search and rescue capability over that area. In rough terms, we have to look after up to 1,200 nautical miles of the Atlantic up to Iceland, but we are not able to do it. We use our search and rescue helicopters and surface vessels, sometimes with dunking helicopters, but helicopters can reach only up to 240 nautical miles. They have no linger time at that distance and have to come back and, frankly, surface vessels using helicopters cannot do the job because even then there is a gap of 1,000 nautical miles that we just cannot supervise. Therefore, we have to get allies such as the French, with their Breguet Atlantic maritime patrol aircraft, or the Spanish or the Portuguese to help us. That is fine, in a way, but not great, given that we should have responsibility for our own seas.

The fact is that maritime patrol aircraft look not just over but under the seas. The invulnerability of our SSBNs—our nuclear submarines, which have a deterrent on board—is threatened by the inability to see exactly what is following them. We can hardly ask our allies to do that for us. I will not go further into that.

We definitely need a squadron of maritime patrol aircraft. I declare an interest, because my brother, ex-Wing Commander Andy Stewart, was commanding officer of 201 Squadron—the Nimrod squadron—and flew Nimrods throughout his career. He is on my back about this all the time, so I hope the House will forgive me for continuing to ask questions about maritime patrol aircraft and for taking up its time on the subject this afternoon. However, this is terribly important to our country. We cannot guarantee the security of the waters around us, but we should be able to do that, especially given the increasing incursions of Russian aircraft and naval vessels around our northern waters.

According to the Defence Committee, the Ministry of Defence gave back about £2 billion in underspend to the Treasury last year, and there is likely to be another underspend this year. That is great—we all want that—but I wonder whether it could be used to start ordering something crucial. This is the biggest military capability gap in our armed forces.

Perhaps we could afford to start the process of getting a maritime patrol aircraft before the next strategic defence and security review. There are two obvious options for off-the-shelf buy. The first is the Boeing P-8 Poseidon, which is probably the leading contender and which operates in the United States. The second is the Orion maritime patrol aircraft from Lockheed Martin, which operates in Canada, New Zealand and Australia.

At the moment in the Southern Indian Ocean, Poseidons operated by the United States and Orions from New Zealand or Australia are combing the waters to try to find the remains of an aircraft that, frankly, has just disappeared. Australia, New Zealand and the United States can do that, but what would happen if one of our aircraft or an aircraft flying over British territory disappeared 900 miles out into the Atlantic? We do not have anything that could get there quickly or could search like a maritime patrol aircraft, which is something we desperately need. We should seriously consider restoring a maritime patrol aircraft capability to our country as soon as possible. We should start moving towards that even before the next SDSR, which will presumably be after the election, perhaps in 2015 or 2016."