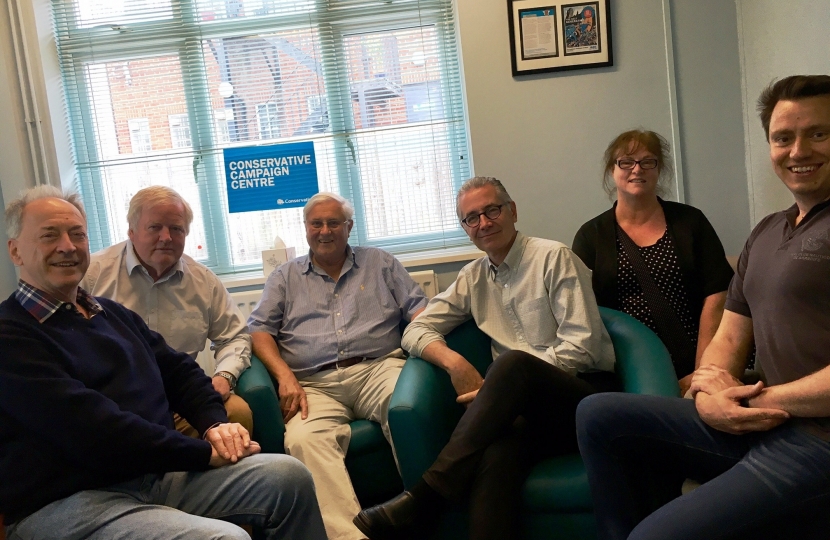 I have heard, from Eddie Pickering, that very sadly my friend Captain Alan Joseph has died.  Alan was a truly lovely  man who I have known since I was 20 years old.  He was a gentleman to his fingertips. Typically he married his long-term partner Denise last month; when he learned that his condition was terminal.  I am much saddened by his death. He will most certainly be in the Elysian Fields now – and with no pain.

My campaigning started today with a visit to a constituent in Scotts Lane, Shortlands before I attended a campaign planning meeting in Beckenham Conservative Office  (pictured).  After that Tony Power and I delivered targeted letters in the Hayes Chase/West Way.  During the afternoon I campaigned in Beckenham itself starting at Godfrey’s Shoe Repairs and then returned to work along Stanley Avenue in Shortlands.

At the national level I was very pleased to read what Sajid Javid has written in the Times  today.  He stated clearly that the Islamic community in our country must ask “searching questions” and have “difficult conversations” with itself – as well as what it does already - condemning terrorist attacks.  It is surely about time.

Javid was reflecting much of what the Prime Minister herself stated yesterday that, “Whilst we have made significant progress in recent years, there is, to be frank, far too much tolerance of extremism in our country”.

Mrs May and Sajid Javid are both right.  Although the Government has a responsibility to set the framework and balance between our Security and our Freedoms, recent terrorists invariably  claim they are Muslims.  They keep emphasising this even as they murder.  On Saturday night at least one of them shouted ‘This is for Allah' and then stabbed a girl 10 or 15 times.  As Javid, a Muslim himself, wrote “There is no avoiding the fact that these people think they are Muslims.  They identify as Muslims and they carry out their attacks – ignorantly, offensively – in the name of Islam.”

The Prime Minister announced that “Enough is enough” but honestly the Islamic Community should have done more before now.  After the event we normally discover that terrorists are frequent visitors to such and such a mosque where they must be known.  Surely someone there must have suspicions of what they are like? True their foul ideology is not a part of mainstream Islam but they repeatedly use Islam to justify their actions.  Decent Muslims must hate it and should now take active steps to out these lunatics.

The ‘searching questions’ and ‘difficult conversations’ to which the Prime Minister referred presumably include why it is that a significant number of British Muslims refuse to integrate into our multi-cultural society?  Such closed communities too often become places where terrorists can prepare their atrocities, be sustained and hide.

When I studied strategy at the Staff College I well recall that the Chinese guerrilla leader Mao Tse-tung always advocated that in war a terrorist should move amongst the people as a fish swims in a shoal in the sea.  It is always difficult to identify one individual fish in such a situation.  These repugnant murderers hide in the Muslim community and use it as cover.  It is now up to the British Muslim population to identify suspicious behaviour, report it and thus take away the camouflage, that they, maybe innocently, give terrorists.

If all sectors of British Muslim society do just that we would have much more chance of stopping repeats of what happened on Saturday night in London, Manchester two weeks ago and the attack in Westminster on 22nd March.  We now need more than sympathy from our British Muslim community.  Action as well as words from now onwards please.