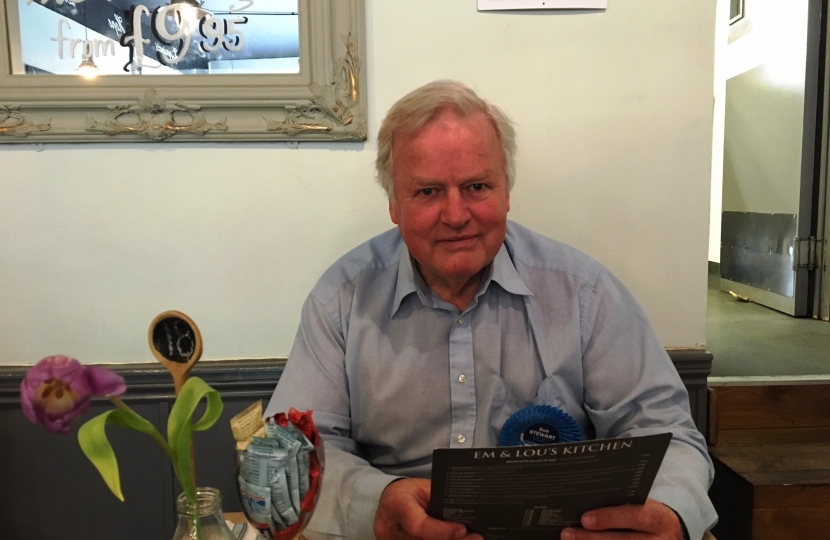 I was conscious that it was a bank holiday today and did not want to bother people on their doorsteps.  Nonetheless I felt it important to be on the streets and so my day started when Neil Cropper and I had a full English in Em and Lou’s Café.  Fortified for the day we then wandered around concentrating on Copers Cope, Kelsey & Eden Park and Shortlands.  I did in fact bother three voters in their homes in Court Downs Road, Stone Park Avenue and Groveland Road because they had invited me to do so.

Overnight I noticed that the Scottish Nationalists have re-confirmed that they would be prepared to work in coalition with Labour which was something mooted previously.  The Liberal Democrats and Greens have already declared as much too.  If by chance, heaven forbid, the Conservative Party did not have most MPs in Parliament, such a coalition might just be able to form a Government.  It would be an absolute disaster if that were to happen.

I would be crucially concerned about the security of our country.  To start with Jeremy Corbyn (although not his Party), the Liberal Democrats and Greens all want the end of our Independent Nuclear Deterrent.  Goodness knows where we would be on the security services if the country was to be led by a man who has consistently voted against them in Parliament and who wants the end of NATO and effective destruction of our armed forces.  The flood gates are also likely to be opened on unrestricted immigration and goodness knows how much extra taxes people who do pay taxes would face.  As for the economy, I think it would go into freefall as is evident by the drop in Sterling because of the polls narrowing.  Jeremy Corbyn may look benign and even cuddly to some but his policies would be toxic.  A Labour/SNP coalition with other minor parties is my nightmare scenario.  I truly hope the vast majority of people who go to the polls on 8 June fully realise just what dangers we would face if Jeremy Corbyn walked up Downing Street the next day.