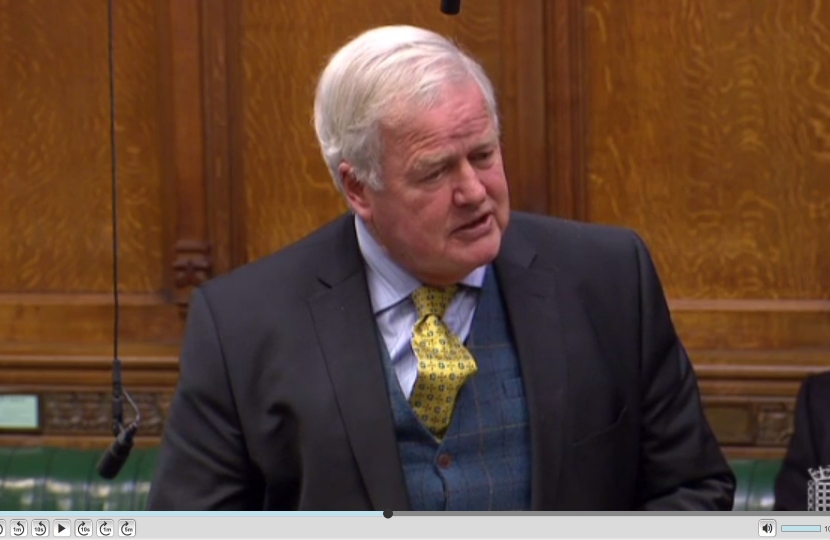 Last week a vote in Parliament on the so-called Grieve amendment split the Commons but not on traditional Government/Opposition lines.  No, the split occurred between those who wanted to deliver what was promised in the Referendum and those that wanted to change that result.  Each House of Commons’ lobby, both for and against the Grieve motion, was filled with MPs from all parties.  It was clear that what parliamentarians call the whipping (where MPs from political parties all vote together as a block) seems to have gone to hell in a handcart - as in so many of the other BREXIT votes we have had recently.

But all MPs, including myself, should beware.  In June 2016 we asked the people to tell us what they wanted us to do about leaving the European Union.  The people replied; by a majority of 3.8 per cent politicians were given their answer.  Parliament was instructed to leave the European Union – not stay in it nor even stay connected to it. The directive was to break from the European Union.

Leave meant leave; not remaining entangled within Brussels’ tentacles in any way.  I cannot see how anyone can suggest otherwise.  Politicians, who, in truth, promised to respect the will of the people, ignore this directive at their peril.  Already the public has a huge disregard for the political class which would magnify even more if conceit (the thinking that we know better) allows Parliament to welch on its promise to quit the European Union.

The Draft Withdrawal Agreement is certainly not definitive.  After handing over a cool £39 billion it commits us to at least a further two years of political and economic wrangling about all sorts of things and chief amongst these is what sort of relationship we will have with the European Union.  Then we are tied into an ongoing customs union from which we have no escape without all 27 European Union members agreeing to it.  We would be hamstrung without an end date to get off that hook.  Meanwhile we cannot seek the much-vaunted trade deals we want outside the European Union.  If we vote through this withdrawal agreement it will be the EU that holds the key to our own destiny.

So, as things stand, I cannot vote for Mrs May’s Draft Withdrawal Agreement on Tuesday 15 January.  I wish I could, but I cannot.  It neither satisfies remainers - as we leave the European Union - nor Brexiteers - as we are stuck to it without an end date.  I made this very point in the House of Commons on 18 December 2018:

“The problem with the deal on the table is that it is neither fish, nor fowl. It satisfies neither the remainers, nor those people who wish to leave the EU, and because of that it falls down.”

Neither can I support having another Referendum. We had a ‘peoples’ vote’ in 2016 and the decision was made then. To those that argue that the people didn’t know what they were voting for in the Referendum I remind them of what was in the Government (‘remain’ supporting and costing £9 million) leaflet put through every post box in the country. Our then Prime Minister, David Cameron (an avowed ‘remainer’), kept saying that if we voted to leave the European Union, it clearly meant we were quitting the Single Market and Customs Union too. There would be no half-way house.

That was absolutely spelt out and emphasised in that leaflet. David Cameron himself as well as many others also kept repeating this message on TV and radio as I recall. I particularly remember him explaining that the Referendum (in 2016) was a once in a lifetime decision and would not be repeated. Finally, if there was another referendum (probably impossible in the time anyway) and there was a majority in favour of remaining in the European Union (not sure of that by any means based on my own e mails and opinions outside London) would those that voted to leave not also demand that there should be yet another (third) referendum for fairness?

I will make a very personal point too.  In 2016 I went from door to door telling people that their vote was important, and they must vote for what they thought to be right.  I didn’t use the words ‘people’s referendum’ but recall saying it was what I called a ‘voters poll’ to determine exactly what the country should do. To be fair I did not try to persuade people either way.   I also remember promising constituents that whatever they decided would be enacted in Parliament.  Just like David Cameron I too explained that the vote was a once in a generation opportunity to express the national will.  I tried very hard to be neutral in the way I presented the arguments for and against membership of the European Union.  But above all I emphasized that everyone’s vote mattered.

What would I do now if campaigning during a second referendum?  People on their doorsteps might justifiably say they have already expressed their opinion -  in 2016.  Why they may ask should they do it again – simply because some people did not like the result first time?   I am sure you can understand that and, personally, I would be embarrassed by such a question.  In truth I believe a second referendum would again be divisive, poisonous and give rise to yet more anger.

I have to say I am being battered by both sides with some opinions being made very forcibly.  I have not experienced such great bitterness in politics before and it seems very sad but a sign of our times I suppose.