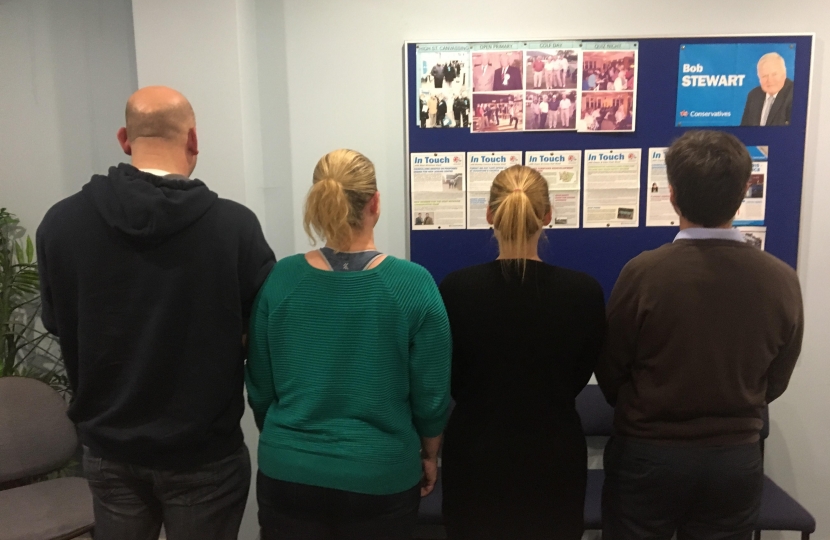 On Friday 28th March I again met a group of constituents (see photograph) who have been very adversely affected by being miss-sold an employment arrangement involving remuneration through ‘loans’.  HMRC have now deemed such arrangements to be unacceptable when previously they were perfectly alright (they are still being miss-sold though - why?).

In my view HMRC is being unfair and intolerant with such people who were and are decent, hard-working and straightforward people who believed they were acting legally (they were) but who now are being pursued in a very aggressive and unfair way by the tax man.  This is something I too could easily have done and it is unacceptable to me that my constituents are being hounded when they acted in good faith and honestly.

I have been approached about this matter by other constituents as well as those with whom I spoke on 28th February.  Such people may also wish to join the Loan Charge Action Group (www.hmrcloancharge.info) whose membership includes the four people I met.  If that does not suit, may I suggest anyone who wishes me to put them in touch with others hit by loan charge repayments, they can contact me and I will do that.

I feel very strongly about this matter and along with other Conservative MPs, I have just signed the letter printed below to the Chancellor, Philip Hammond.

REVIEW OF THE LOAN CHARGE

We are writing to you as a group of Conservative colleagues who are deeply concerned about the 2019 Loan Charge and the effect this will have on a number of our constituents, as well as on the contracting service industry in the UK.

We are very pleased that the Treasury decided to accept NC26 in the 2018 Finance Bill and that there will now be a review of the Loan Charge, reporting by the end of March.

We wish to make clear that this review must be genuine, but also to urge you to announce an immediate delay or suspension to the introduction of the Loan Charge, in order to allow for a proper and full review of the policy. This must happen before it is too late and individuals are made bankrupt and lives ruined.

Freedom of Information requests have exposed that the original impact assessment did not predict the number of bankruptcies or the effect on those families affected by the Loan Charge. Regardless of claims that HMRC will agree Time To Pay to help people, the reality is that the sums involved in disputed retrospective tax going back to 1999 are simply too large to be affordable, even over a longer period than the five years offered. The reality is that if the policy continues unamended, there will be many bankruptcies, at a significant cost to the taxpayer. Some individuals affected will be unable to work again, following a bankruptcy,  and quite a number that we are aware of are already retired. The human impact, which is becoming increasingly apparent, will be serious.

HMRC have the discretion, by law, to not collect tax deemed due under the Loan Charge. It would be just and correct for the Treasury to direct that they exercise this discretion, pending a proper review. Doing so would allow for that proper review to take place and avoid the personal catastrophes that will otherwise befall many people and their families, including some of our constituents.

We would recommend that you announce that the settlement deadline is postponed for at least six (6) months, to October 2019. A genuine review cannot, realistically, take place whilst HMRC are continuing to push people into settling disputed tax sums and causing distress. In order for the review to be genuine, the settlement date should be postponed and this announcement made swiftly.

As you know, there is significant concern amongst Conservative colleagues about the Loan Charge, its fairness and its impact on those affected. It is particularly concerning that the Loan Charge allows HMRC to pursue people with closed tax years. These are cases where an enquiry was opened in the past, and then subsequently closed after HMRC confirmed that all necessary tax had been paid - in some cases, even issuing refunds. With such people now being pursued for tax in respect of these closed years, it is not only undeniably retrospective, but also simply wrong. It undermines the basic principle of tax certainty that underpins the UK tax system.

We urge you to listen and announce a necessary pause to implementing the Loan Charge, to allow for a genuine and proper review, to assess the real impact, and to ensure that this contentious and troubling policy be properly reviewed.

A full debate on the review, on the floor of the House in Government time, should also be part of this process and allow MPs to raise their and their constituents’ concerns. Could you let us know if the Government will find time for this debate?

We look forward to hearing from you and are also happy to meet to discuss this matter.

(and over 50 other Conservative MPs)