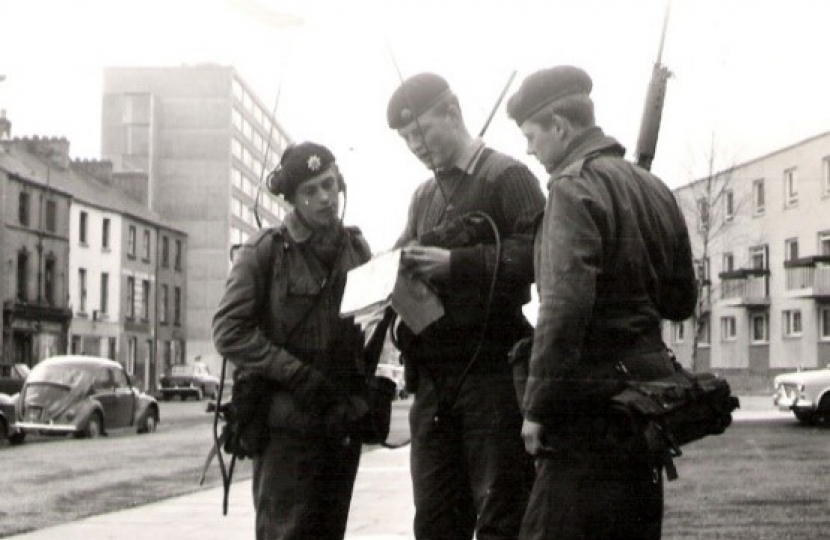 Today, 4th March, the following letter about the lack of support for soldiers being investigated for their involvement in fatality shootings in Northern Ireland was published in the Daily Telegraph. With other MPs I was a signatory to the letter.   Personally I have frequently spoken about this matter in the House of Commons.  It is iniquitous that this pressure remains on soldiers who were doing their duty for all of us in Northern Ireland and whose actions were investigated at the time.  As I know from experience this happened whenever such incidents occurred (photograph taken in Londonderry 1970 when commanding 6 Platoon, B Company, 1st Cheshires).

We write to express our dismay at the prospect of former soldiers being charged with murder arising out of the Northern Ireland troubles. We believe this is totally unjust and a betrayal of those men, many of whom are now in their twilight years and suffering illness, who served the Crown in the Troubles where the enemy wore no identifying uniform and mingled with the crowd.

In January 2017, the Prime Minister stated that ‘The Government has always acknowledged an ongoing duty of care to former soldiers,’ yet that duty seems only to extend to the provision of legal help. The Prime Minister also admitted that ‘there is an imbalance in the investigations and cases relating to the Troubles’ with legacy related cases almost exclusively focusing on the military and police ‘while many hundreds of unsolved terrorist murders are left uninvestigated,’ a situation she acknowledged had to change.

Whilst the forces of the Crown maintain records, the IRA has none, so the imbalance can never be rectified. Your report that some relatives of those killed on the 30th January 1972 do not wish to see these men jailed adds further powerful argument for the Government to stop wringing its hands and intervene to halt this inhuman action by the state.