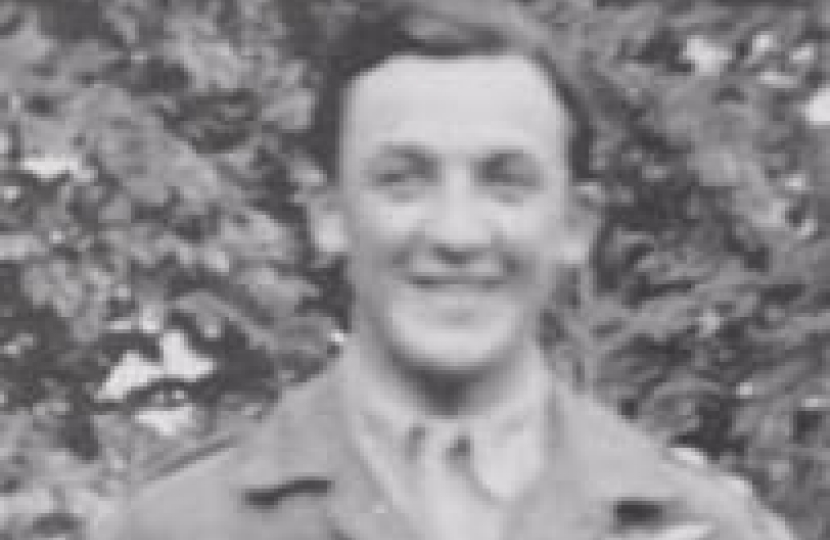 I am very upset to hear that Brigadier Mike Dauncey DSO has died. Sadly, his wife Marjorie died a few years ago. He missed her tremendously so I hope they are back together now.

Mike Dauncey was without doubt the bravest man I have ever met. I am very proud that he was both my friend as well as Colonel of the Cheshire Regiment, particularly when I was its representative as a Captain Instructor at the Royal Military Academy Sandhurst from 1978 - 80. During that time we met frequently as one of his primary duties was to interview potential officers for our Regiment.

Mike was not just courageous but utterly decent, humble and very quiet. I never heard him raise his voice and his leadership was such that when soldiers being disciplined by him were told that they had let him down it had a tremendous effect on them. I witnessed that on more than one occasion.

But, no doubt, what Mike Dauncey will most be remembered for was his actions on OPERATION MARKET GARDEN at Arnhem when he was a young Lieutenant.

On 17th September 1944, seconded from the Cheshire Regiment as a pilot, Mike landed a HORSA glider at Arnhem. On the ground he reverted to being an infantry officer and took part in several days of fighting where he was wounded three times and lost an eye. Eventually taken prisoner he managed to escape with another wounded officer from a German military hospital by making a rope of knotted bed sheets. Together they evaded the Germans for 4 months, during which time the enemy declared that they had both been caught and shot, which, of course, they had not.

Mike was recommended for the VC for his actions at Arnhem but General Montgomery, erroneously in so many people’s view, downgraded it to the DSO. The broadcaster Jeremy Clarkson agreed - once making a programme about the Arnhem VC that ‘got away’. This is his citation for the DSO:

During the action at Arnhem from 20th to 25th September 1944, Lt Dauncey was in command of a party of men defending the guns of the Airlanding Light Regiment RA at Oosterbeek. The position was continually attacked by superior forces of enemy tanks and infantry. On three occasions the enemy overran the sector necessitating a counter attack. Lt Dauncey, on his own initiative, organised and led each sortie with such determination that the positions were regained with heavy loss to the enemy. In the face of heavy small arms and mortar fire he personally attacked machine-gun posts, showing remarkable coolness and complete disregard for his own personal safety. During these attacks he was wounded on three occasions but refused to be evacuated from the area.

On 24th September a more determined attack was made by the enemy using tanks and S.P. guns. Lt Dauncey, whilst leading his men in a further counter attack, was wounded again - losing the sight of one eye. In spite of pain, and handicap of defective vision, he continued to lead his men in a fearless manner thus recapturing the lost ground and inflicting heavy loss to the enemy.

On 25th September the position was subjected to intense fire from an enemy S.P. gun. The houses were set on fire and the order was received to withdraw. By now no anti-tank weapons were available and there was imminent danger of the enemy S.P. gun penetrating the gun positions. Realising this fact, Lt Dauncey, who had remained alone, assaulted the enemy vehicle single-handed with gammon bombs. By his action the critical situation was averted but Lt Dauncey received further injuries which resulted in his capture by the enemy.

The high morale of the men, who had been drawn from many units, was undoubtedly due to the fine example of this officer. Had the enemy broken through this sector, the gun positions would have become untenable and thus unable to support the Airborne Division.

Lt Dauncey's indomitable courage, initiative, coolness and selfless devotion to duty, in spite of his wounds, was in keeping with the highest traditions of the service.

I have had a huge privilege to have known and served with Brigadier Mike Dauncey DSO.

May this gallant man rest in peace.