THe Importance of the United Nations 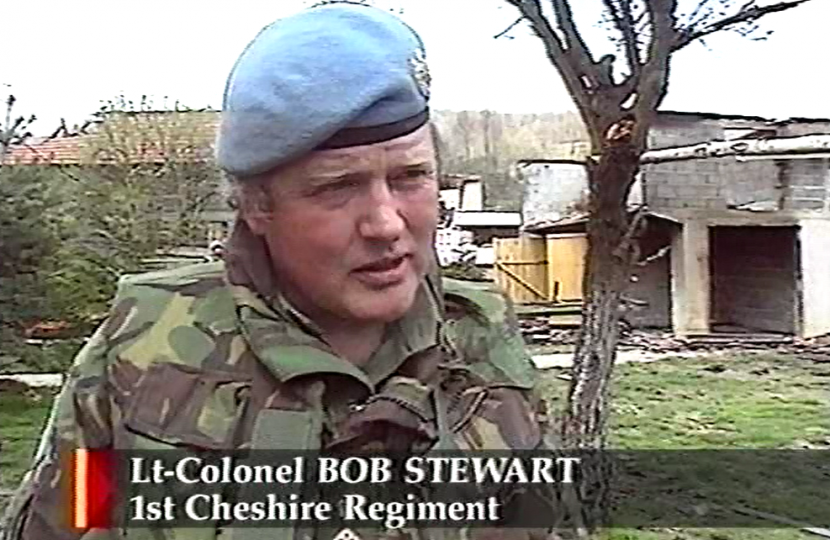 Speech Made in House of Commons on 30 January 2020

I would like to compliment everyone who has made a maiden speech today, particularly my hon. Friend the Member for Wolverhampton South West (Stuart Anderson). His was a particularly good speech until he mentioned the Royal Green Jackets being the best regiment in the Army, at which point I started feeling nauseous.

I want to speak about the value of the United Nations to global Britain because we never, ever discuss the United Nations, and it is an invaluable arm of our foreign policy. I am somewhat biased because I was once part of the organisation as a United Nations officer in 1992-93 (See Photo).

Let me say one thing about wearing a blue beret: when I put it on, I felt it was rather special. It was not just national but international. I remember telling a Bosnian Croat commander who was blocking my way in Bosnia, “Get out of my way; I represent the United Nations.” To be honest, I felt that was a huge moral authority.

Of course, we are no longer a great power. Any vestiges of that disappeared in 1956 with the Suez debacle. At that time, we were rapidly decolonialising and the events of 1956 probably accelerated that process.

Bob Seely: I very much respect what my hon. Friend says. I am just nervous about this, “Oh, we’re terribly unimportant nowadays” argument. We are not a superpower and have not been since the 1950s. China is the new superpower and the United States of America, our closest ally, is a current superpower. But there are a series of great powers underneath that level, including France, Germany and Japan, and rising ones such as Brazil and Indonesia. Arguably, because of our varied and integrated assets—our language and culture, and the military in which my hon. Friend served—we are still a great power, and perhaps the most leading one.

Bob Stewart: I am not going to argue with my hon. Friend about the semantics, because I agree with him. There is a level below the superpower of which we are most definitely a member.

I firmly believe that our participation in the United Nations really helps us to have influence in the world; and if we get it right, we get it very right. We were a founding member of the United Nations in 1945, which then—75 years ago—was an organisation that reflected the power politics of that time. Now there are 193 members and the United Nations is honestly the world Parliament, albeit a flawed one just as we are flawed here. It is the best we’ve got.

Critics quite rightly say, “Things have moved on. You’re looking at something that was relevant in 1945 and things have a hugely changed since then.” They are right. In a way, the United Nations is stuck in the past. The way it is set up is.

Many people say—and my hon. Friend the Member for Isle of Wight (Bob Seely) just implied this—that states such as Japan, Germany, India and Brazil, and perhaps the European Union in the round, should be permanent members. Others say that France and the United Kingdom should not. Actually, they have a point—we must accept that—but may I just examine it and tease it out a bit?

In terms of GDP contribution to the world, the United States is at 24%, China is at about 16%, Japan is at 5%, and then Germany and India at 4%. The UK and France are next, at 3%, followed by Italy, Brazil and Canada, at 2%. Interestingly, Russia is at less than 2%. Thus we hear the odd phrase that Russia’s economy is smaller than Italy’s—that is where it comes from. Using such measures, and assuming that the Security Council continues to have only five permanent members, they will be the United States, China, Japan, Germany and India. The UK and France would be out, and so too would Russia.

But in truth there is no real mechanism for change in the United Nations, and I do not think there is much appetite for it either. Trying to change that sort of organisation would be incredibly difficult. For instance, it would require the agreement of all five current permanent members—in other words, they would be volunteering for redundancy.

I do not see that happening, and I am not sure whether the world would want it to happen. So, for the foreseeable future, the United Kingdom will remain a permanent member of the Security Council. That is really good news for us, as global Britain—great news. It provides us with a platform, and we do not have to pay too much for it because we use our reputation. Our reputation in the world is huge, regardless of fact that we have lesser and lesser defence forces. I have had direct contact with that myself, as I once rang the Security Council from the field, and when I said I was British, that got me through pretty quickly.

We have a very good reputation in the Security Council, and the General Assembly as well.

Let me comment particularly on British involvement in UN peacekeeping, which, of course, the Security Council authorises. No United Nations operation can take place without being sanctioned by the Security Council, and we, as a permanent member, have a veto on that.

I am glad to see my hon. Friend the Member for Wolverhampton South West back in his seat. I am sure he missed my slight dig at the Royal Green Jackets, so I want to get it in again now he is back—but he can read it later.

For peacekeeping, there are three practical ways in which we contribute in the Security Council: first, by helping to provide the mandate, then by funding the forces, and then by contributing forces. Overall, the United Kingdom contributes nearly 7% of the UN’s budget for peacekeeping. That is more than we have to, but we still do pretty well because it is considerably more than our world GDP percentage.

I am glad to see that the Minister for Defence People and Veterans, my hon. Friend the Member for Plymouth, Moor View (Johnny Mercer), is now in his place, because I am about to give him a bit of a hand, as he is a good friend. It was a good idea for him to attend and perfect that he has just arrived. From hints put out by the Government over the last weeks, I gather that they intend to put more effort into UN Peacemaking and the Department of Peacekeeping Operations. That is really good news—I am totally up for that. In fact, as part of our defence review, I am up for the idea of earmarking part of our armed forces to be sent to the United Nations when there is a requirement and we agree it. I like the idea of a battle group that is UN-designated.

I accept that the United Nations is not perfect, but it is well worth having, and honestly, it is all we have got. Every recognised state in the world—all 193 of them—is a member, and each has a seat in the General Assembly, as do we. Of course, the UK may not like some of the resolutions and debates in the General Assembly, but there is no doubt that it is the best forum—indeed, the only one—for gauging world opinion. Condemnation within the forum of the world is never welcomed by any country.

I have concentrated on one part of global Britain, but that is because I wanted to, because I believe that the United Nations is so important. The United Nations is a crucial part of keeping and improving our international influence. We are doing well now—we are not doing badly—but if we put more effort into it, we could get much more back.

Our permanent seat on the Security Council is incredibly valuable, because that is where legally binding international mandates are designed, and through our own arguments, with our good Foreign Office officials and our good Ministers, such as the hon. Member for—where is it?

Bob Stewart: I have not been there yet, but I am coming. It is people like my hon. Friend who go and represent us at the Security Council.

Let us give as much support as we can to the United Nations, and by doing that, I bet we will get much more back than we put in.