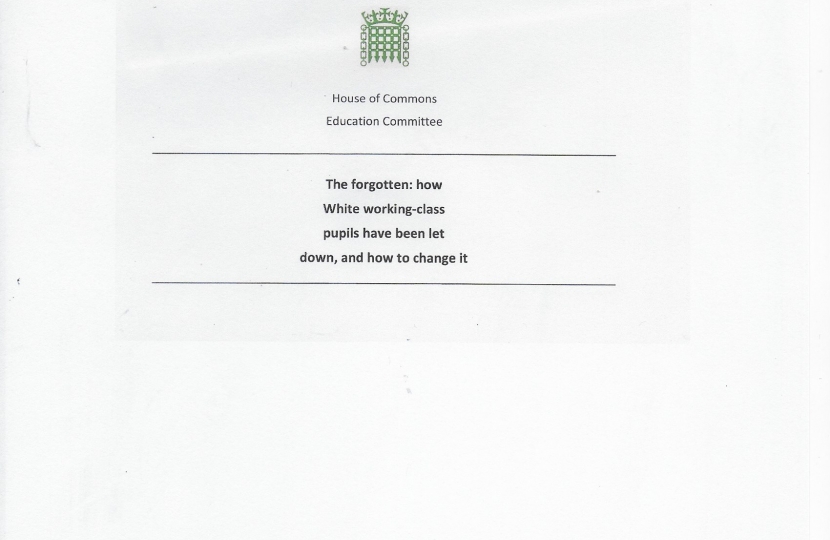 An interesting report was published last week by the House of Commons Education Select Committee highlighting failures in the education system which have led to the chronic underachievement of white working-class pupils. The select committee is chaired by my friend, Conservative MP, Robert Halfon, who has built up a huge reservoir of respect from colleagues across Parliament for his fearless determination to challenge the Government when he thinks things are wrong and put forth alternative policy proposals.

The media reports focused on the committee’s particular concern around terms increasingly used within public forums such as “White Privilege” which may have contributed towards a “Systematic Neglect” of white working-class pupils. The concept of White Privilege is imported from the United States of America and contends that white people have an in-built advantage in society by virtue of being the majority group and, therefore, a person from an ethnic minority background, in trying to better their life, will come up against a barrier of societal racism which will, inevitably, stymie their efforts.

I am not alone in finding this a particularly divisive and pernicious concept, which is all too often used by certain sections of the self-proclaimed “Progressive Left” as if it is settled fact and not, in reality, a highly contested set of ideas within society. It seems plain to me that if any group in society is taught from a young age that, no matter what choices they make to pursue success in their lives it will never be enough to overcome the barriers created by other groups in society to hold them back, they will inevitably develop a strong sense of grievance towards society in general and those groups in particular which they perceive to be blocking their life chances. Not only does this create a terribly self-defeating attitude towards life. It also strips away any notion that some people may not be able to change their circumstances by virtue of their own endeavours. After all, what motivation can you have to achieve your life goals when you are taught the deck is so irreversibly stacked against you?

In practical terms it is entirely conceivable that this type of blanket theory may actually have the reverse effect and cause resentment amongst the majority population. How would you credibly convince a white working-class pupil, from a deprived area with a less than supportive family, who left a local state school with no qualifications that they are somehow more privileged in life than a pupil from an ethnic minority background, living in an affluent area with the benefit of a supportive family, who attended a private school and comes out a straight A student? I would suggest they would feel anything but privileged.

My belief has always been that we need to support ways to encourage people to recognise the commonalities we share as British citizens, a shared sense of identity which we can unite around, rather than endlessly trying to find ways to divide us into groups based on our immutable characteristics, with an underlying suspicion of bad faith towards others. That was certainly how I operated as an Army officer.

That belief has continued in the 11 years I have spent as Member of Parliament for Beckenham.  I have been committed to challenging and stamping out the ugly scourge of racism from society, wherever it exists. I know only too well the ghastly consequences which can occur when people are taught to distrust one another based on race or ethnicity. As the UN commander of British forces in Bosnia, I witnessed the aftermath of atrocities committed by one ethnic group against another, driven by a ferocious hatred and warped sense of national pride, underpinned by perceived historical grievances.

Finally, amongst the list of recommendations made by MPs on the committee for improving the outcomes of working-class pupils was to find “a better way to talk about racial disparities” without pitting different groups against each other. I could not agree more.