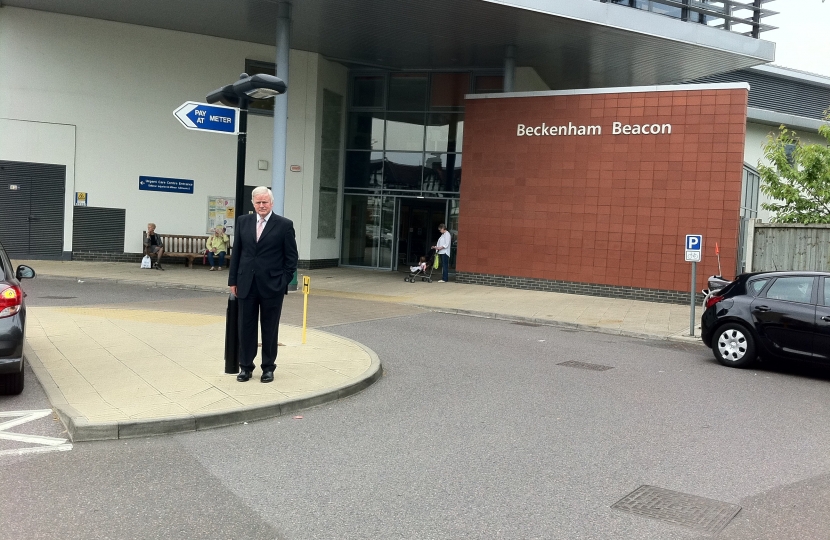 THE FUTURE OF THE BECKENHAM BEACON

The Department of Health appointed Administrator, Matthew Kershaw, has produced a report to try and sort out the problems being faced by the South London Healthcare Trust (SLHT) which last year had a deficit of £69 million.  This was largely the result of a disastrous Private Finance Initiative deal which included the re-build of the Princess Royal University Hospital (PRUH) and the Queen Elizabeth Hospital, Woolwich, where once, I spent six months myself (it was a Military Hospital then) recovering from a service injury.   However that debt was also a result of poor management of resources.  The full report as well as details of public consultation can be seen at http://www.tsa.nhs.uk.

This report recommends that the Government writes off a lot of the debt and that considerable reorganisation as well as increased efficiency is required.  Within my Constituency Mr Kershaw has recommended that the SLHT withdraws its services at the Beckenham Beacon.  Currently SLHT rents space at the Beacon from the Bromley Primary Care Trust (PCT) for £1.7 million a year and Kershaw reckons that about 45% of this rented space is poorly used.

I have spoken with both Mr Kershaw and the Bromley PCT about this situation to ascertain what might happen.  I understood the following from those conversations.

Firstly, if SLHT provision was withdrawn from the Beacon much if not all of what is provided is likely to be continued by the Bromley ||PCT and its successor (from Spring 2013) the Bromley Clinical Commissioning Group (CCG).  I was told that the newly built Beacon facility is simply too modern and good to be wasted in the way it is at present.

Secondly, Bromley CCG will have the money to decide what services it provides at the Beckenham Beacon.  Indeed more clinical and diagnostic services could be put there.

Thirdly, local people and groups should ensure they contribute to the Consultation exercise which ends on 13 December.  That includes me personally as my family are registered with a doctors surgery there and I have often used other Beckenham beacon facilities foe my children too.

Obviously I want the very best deal for residents around the Beckenham Beacon and I certainly want its magnificent facilities to be fully utilised.

Let me also declare a personal interest.  My family are registered with a doctor’s surgery at the Beckenham Beacon and I have frequently made use of the minor injuries unit for my children – particularly at weekends.  I am a total fan of the place.

As I outlined at a joint meeting of the West Beckenham and Copers Cope Area Residents Association in Beckenham Public Hall on the evening of Wednesday 7 November my approach is as follows.

Firstly, I have pointed out to both Mr Kershaw and Bromley PCT/CCG that, in future, I want the facilities at the Beckenham Beacon to be better than they are at present.  As a minimum I want what happens there to continue but actually I want Beckenham Beacon facilities to be even better than they are now.  It is a brand new facility and not to fully utilise it would be criminal.

Secondly, I encourage everyone to contribute to the public consultation which ends on 13th December.  Please send a letter to the Administrator if you do not have access to the internet.  Whatever way you contribute please say exactly what medical services you would like to see at the Beckenham Beacon.

Finally, I repeat, I will do everything I can to ensure that we have the very best medical services possible, not just at the Beacon (within my Constituency) but also at surrounding hospitals.  I am also keeping my eye on what happens at the PRUH and especially the future of the Accident and Emergency Department at Lewisham Hospital.