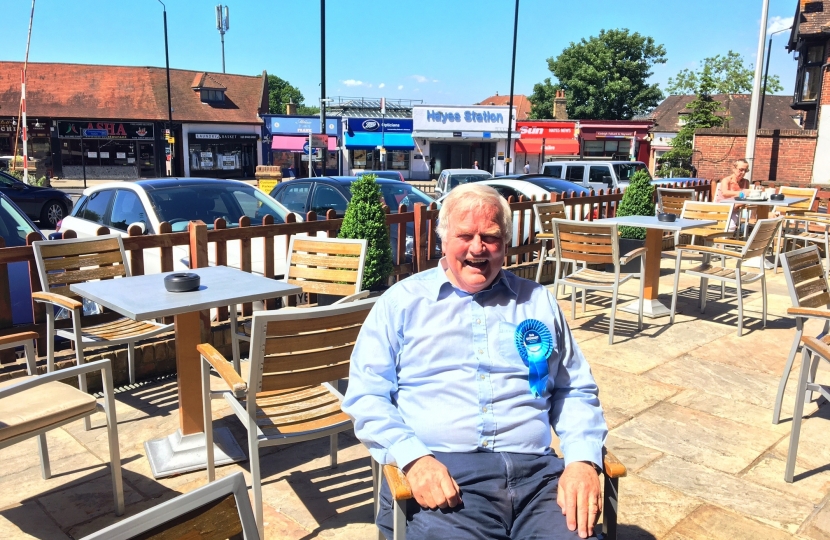 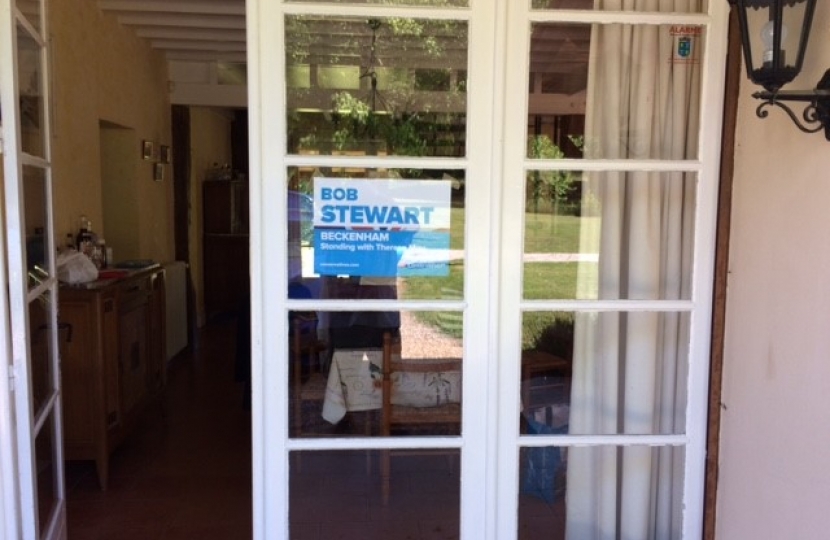 I wanted to visit several places today as the General Election Campaign was now re-starting properly after the tragedy which occurred in Manchester.  So, I began in Hayes quite early but cut my campaigning short to visit a lady, who had asked to see me to discuss Conservative policy in Shortlands.  I spent an agreeable hour chatting with her.  Thereafter I also visited Robert Straker, recovering from a knee operation, in Copers Cope.   A while later I went back to Hayes (photo).  But before returning to Hayes I also stopped off at the Beckenham Conservative Office from where, by telephone, I was interviewed by Jeremy Vine on his BBC Radio 2 programme.

Down the line Jeremy Vine quizzed me on the value of TRIDENT nuclear submarines of which I am a strong supporter. Apparently, in election discussions, the costs of TRIDENT are being questioned by some who argue that a nuclear deterrent does not stop us from low-level terrorist attacks.   As I understand it, their argument is also that the money for TRIDENT might be better spent on countering such terrorism.  But they miss the point entirely.  Our strategic nuclear deterrent is designed to deter strategic nuclear threats not terrorism. The two matters may both be about security but they are hardly closely connected.  I believe also that we still face a nuclear threat and we must counter both threats simultaneously: a possible strategic nuclear threat and the threat of terrorism.  Security and defence do not come on the cheap.

On the radio, I gave three reasons for requiring the TRIDENT System; it is the ultimate deterrent, it protects us from nuclear blackmail, and it gives us international standing. There are other reasons too but, in the time I had, I could not go into them.  However, I did point out that Russia and China are both massively building up their own conventional and nuclear weaponry whilst we are continually reducing ours.  Not for them any doubts about nuclear political or military utility.  I stated that Russia exercises in the Baltic using both conventional and nuclear means in combination during their practice operations.  But if, heaven forbid, we had to fight the Russians, I reckon there would be much less chance of them using nuclear weapons if we possessed them too!

I also emphasised that our at sea deterrent is working 24 hours a day and if it were to be used deterrence would have failed.  The whole point of a deterrent is that it deters and it certainly has worked so far.

Finally, I pointed out a specific example of where giving up a nuclear deterrent may not have been wise – at least from the point of view of the country concerned.  In December 1994, a protocol was signed in Budapest between the United States, Russia, the UK and Ukraine (later joined by China and France) which guaranteed the sovereign integrity of Ukraine - provided it gave up its nuclear weapons.  It did just that but we all know what has happened since.  Russia has invaded Eastern Ukraine as well as the Crimea and (shamefully) we have done nothing to stop it.  We were protocol bound to do so.  I wonder whether the Russian invasion would have happened if Ukraine was still nuclear capable?  I suspect not.

As an amusing aside, I have attached a photo of one of my campaign posters spotted in Cercoux, near Bordeaux, France.  To start with I was impressed - thinking that my campaign had quite a reach.  However, the mystery was explained when I discovered it is in the window of a house owned by Chris (ex-Bromley councillor) and Hilary Knox-Johnston, both of whom come from Beckenham. Thank you the Knox-Johnstons.