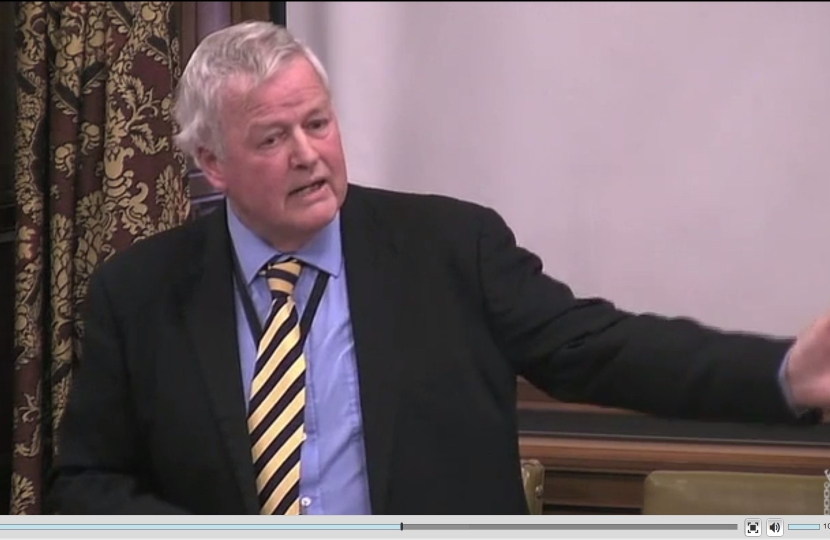 I want to make a slight change from the way other people have spoken. I want to talk about what I have seen as a witness to religious-inspired genocide, particularly between Bosnian Croats, who are Catholics, and Bosnian Muslims, sometimes called Bosniaks. Both sides are ethnically exactly the same; they are South Slav peoples. The only difference is religion.

In 1992-93, I was the British United Nations commander in Bosnia. During my time, I found evidence of atrocities before April 1993, but nothing like what I found on 22 April 1993. That day, I was in the hills on the instructions of the European Community Monitoring Mission ambassador, trying to stop the fighting between Bosnian Muslim and Bosnian Croat forces. I was on the frontlines, and a Bosnian Muslim commander said to me, “You know, we’re not stopping fighting, because our people are being killed by them over there, and they’ve been killed in large numbers in a village called Ahmici.” I said, “I don’t believe it.” They said, “They are.” I said, “Look, if I go there and I discover you’re wrong, and I come back and tell you that you’re wrong, will you take my word for it and stop the fighting?” It was a sort of trade-off.

They said yes, so I left there and went off the hills. My men and I were attacked a couple of times by snipers. We by-passed a Croat special forces unit that opened fire on us and we went into the village called Ahmici. As I entered, I saw the mosque at the entrance had had its minaret toppled—not a good sign. I drove all the way up to the top of the linear village, about a mile. As I passed through it, I saw such devastation that I could not believe it. There were some houses still standing; they had crosses on the door, marked in paint. Everything else was destroyed.

At the end of the village I deployed a platoon of men—let us say 36—either side of the road, in straight lines, and we went through. I was looking to see whether I could find anyone. We did not find anyone; we saw dead animals, but we did not find anyone until about one third of the way down the village. We came across a house, and my men came back to me and said, “This is disgusting, sir, absolutely disgusting.”

We went to the house, and in the doorway were the remains of a man and a teenage boy. They were burned, and they were shot—there were shell cases on the floor—but around the back was worse. We went into a cellar at the back of the house, and when we first saw what we saw, we could not believe it. Our eyes did not believe it. The first thing that hit me was the smell; then, in waves, I realised what I was seeing. I was seeing the remains of a family. That family had been massacred—my goodness, I hope they were shot before they were burned. I do not know whether they were burned alive; I damn well hope they were not, but they were shot. There was a mother, back arched, and there were children. My men and I came out retching.

I had no idea what to do. I could not talk about it, I could not do anything, I was there in a neutral capacity, but I had to do something, because this was religious genocide. It was disgusting, and we had to do something about it—not just talk about it, not just report it. We were on the ground, but what could I do? I did not have enough men. What could I do? Who would I attack?

Then I thought, “The best way of dealing with this is to publicise it right across the world.” So I called a press conference beside my tank. I accused the Bosnian Croats directly of causing the massacre, because the houses with the crosses on were Christian Catholic houses, and those that did not have a cross, the Bosnian Muslim houses, were destroyed.

A couple of days later, I buried over 100 people in a mass grave, mainly women and children and old men. As I was coming away, there beside the road I saw a family in line, dead: mother, father, boy of about 10, girl of about six—dead. The girl was holding a puppy. The same bullet that had killed her had killed the puppy. I took the bodies to the local morgue. I took them into the morgue and said, “Please deal with these bodies.” That is not a great job to do; it is horrid.

I have given evidence in five trials as a result of those activities, at the International Criminal Tribunal for the Former Yugoslavia. I knew the commanders on both sides; I had dinner with some of them. On the face of it, they were normal, decent people. I have to ask: what is it that makes normal, decent people turn to such brutal techniques? How can normal people kill a child, a woman or a man? How can they do that? It seems to me extraordinary.

Obviously, we have never been in that situation, but why is it that the Nazis, for example, who were normal German people, could do that? Why could normal people in Cambodia, or elsewhere, do that, mainly because of religion? Why does it happen in the name of religion? I do not think there is a mainstream religion in the world that advocates violence against another religion, is there? There are lunatic offspring that claim to be part of a religion, but not the mainstream religions, so why is it that, despite that, we still have people being killed or persecuted for religious reasons? I do not know the answer.

I believe, in my heart of hearts, that religion is often used as an excuse to persecute—a really damn good excuse to back up other reasons for persecution. I remember talking to a Christian Croat farmer. I challenged him on why he had attacked the next farm along. He had been to school with his neighbour. He had known him since they were children. They apparently liked one another. He said to me, “I want his farm; he doesn’t deserve to keep it, because he is a Muslim”. Do hon. Members see what I mean by saying it is an excuse? I suspect that religion is often used for that reason—to give people an excuse to do what they wanted to do in the first place.

I hope I am wrong, but I now believe that we will never be able to stop religious persecution, not completely. But my God, it is our duty to do everything we can to try.