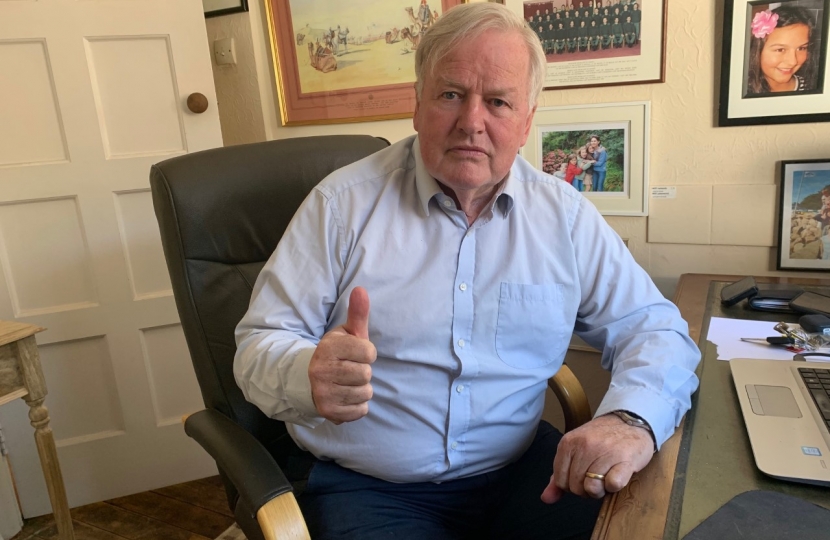 Yesterday I was briefed by the Leader and Chief Executive of Bromley Council on the local situation in what has now become a weekly ritual.

I gather that something like 13 per cent of residents and 7.7 per cent of staff in Bromley’s care homes have tested positive for Coronavirus. Action has obviously been taken to protect people thus identified and, as I mentioned last week, each bed in care homes has been allocated £1,000 from the Council to keep it as germ free as possible. In terms of PPE I was briefed that all care homes have enough now and 474,000 items of it have been handed out.

Testing and tracing is now in operation in Bromley Borough. For instance, last Saturday there were 9 new cases of Coronavirus identified locally and through testing and tracing all those who have been in (infection contact) range of those 9 people have also been tested. Locally the testing and tracing system is in its early days but it is expected to expand rapidly.

I understand that Bromley is developing plans to deal with local outbreaks of Coronavirus within say, office blocks or at schools. These will obviously involve the test and trace system and immediate isolation.

Yesterday primary schools re-opened for Reception, Year 1 and Year 6 children. The Council did not have enough feedback on how this was going by the time of the briefing which as at 11 am. I was in contact with several primary schools myself and I gather that overall about two thirds of Reception and Year 1 classes were there and about 80 per cent of Year 6 children. Obviously, some parents remain worried about sending their children to school.

However, today I am going up to Westminster for the first time in nearly 11 weeks and I am hoping that we now see the first buds of a return to normality. I have to be there in good time because we are required to vote on how we vote in future. Apparently Public Health England has deemed that the way we voted just before the House of Commons packed up in March still broke social distancing rules. So, we are voting (not sure how) to decide how we vote in future; if that doesn’t seem non-sensical.

MPs with background health worries or any other concerns have been told that they do not need to appear in Westminster and they will be paired with someone of like mind on Opposition benches. I do not think that affects me and so later I will be on the train from Shortlands as in the old days.

For me being able to go to Parliament is good news. A major point of MPs being together in one place is to be informed as to what is really happening. As I have mentioned in past blogs almost all my information has necessarily come from the internet and I hope that is about to change one way or other.

Although I have kept in touch with many other MPs by phone, e mail and Zoom during lockdown it is nothing like as informative as being in Westminster itself. It’s not just the opportunity to pinion ministers about matters of concern and get information from other MPs but, more than that, I often get wise counsel from other colleagues about how to help constituents. I have been an MP now for 10 years and yet there are still things I need to learn from colleagues not to mention the clerks of the House of Commons who have normally seen most situations before.

With that and bearing in mind a change of location I will now stop this run of 72 daily blogs all of which have been on the theme of defeating Coronavirus. I have tried my very best to write about matters of concern to all of us here is South East London. Once or twice I accept I may have got things a little wrong and, if so, I apologise. But actually, thinking about and composing those blogs has helped me understand the situation a little better. Hopefully they may have helped others a little too. That was my intention.

Let me end by saying that we are now firmly launched into Step 2 of coming out of lockdown and I think and hope that things are on the up and up. Let us just hope that this wretched virus doesn’t raise its head again as we loosen our bonds. I am an optimist by nature. And, maybe, just maybe, in Step 3 my next haircut can be done by someone who knows how to do it!