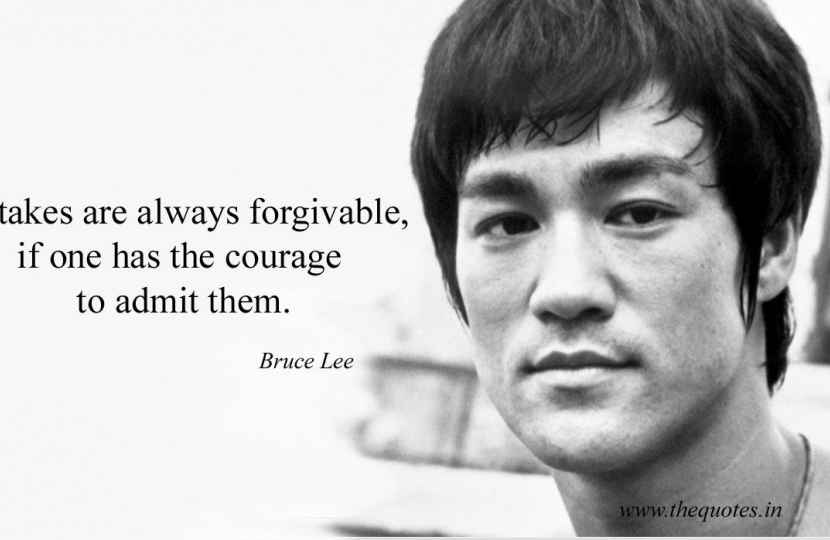 Probably the most important thing I learnt when an Army officer in the Cheshire Regiment was to honestly admit mistakes, apologise and rectify them and then move on. Invariably Cheshire soldiers, who normally knew full well that a bog-up had occurred, accepted the apology, perhaps even thinking more of me for doing that and then maybe regained trust in me if they had lost it. That’s terribly human. Actually, it’s rather a British way to react. We rather like it when people accept they have done wrong and apologise. But so often it’s not the way many politicians seem to work.

A lot of politicians seem to think having to apologise shows weakness and time and time again I have watched in Westminster as MPs refuse to allow that they may have got it wrong. Apologising does not show weakness; quite the reverse. I despair sometimes when I see politicians just get themselves more and more in the poo. They should just say sorry, I made an honest mistake and I will rectify it. Forgive me. For Goodness Sake why do politicians not realise that the public will forgive honest mistakes but they lose faith with those that simply cannot bring themselves to apologise.

• Maybe we could have locked down earlier. Government pandemic modelling envisaged an influenza pandemic and totally ignored the possibility of one from Coronavirus. Medical intelligence sources should have picked up the preliminary alarm bells from Mers and Sars virus outbreaks. In fairness we were not alone in Europe; no other country paid heed to those previous warnings. In fairness neither Mers nor Sars hit the UK so complacency was inevitable. But Singapore, South Korea and Taiwan were certainly not so complacent and in consequence they were far more ready for the tidal wave of COVID-19 when it arrived.

• It is now clear that the science on which the Government leant so heavily has been proven to be rather wobbly at least in parts. Remember the half a million deaths warning which sent the Government scarpering into lockdown on 23 March. That science emanating from Imperial College and was mustered by (the now somewhat shame-faced and resigned) Professor Neil Ferguson. It was presented as the gospel and acted as a shield for ministers. That was until alternative science, for instance from Oxford University, challenged the so-call compelling orthodoxy.

• We simply had not laid in enough stocks of Personal Protective Equipment (PPE) for the NHS or anyone else. There are reasons for it, principally that it was felt the money could be better used in other parts of the NHS. But even when the lack of PPE was so evident, like a super tanker the NHS and particularly Public Health England, bulldozered on using the same tried (and trusted) procurement systems. Public Health England would have done far better simply accepting it was overwhelmed and enlisting the private sector to rectify the problem – which it could have done quite quickly. That having been said, it’s too easy to blame Public Health England. Ministers should have stepped up to the plate, grabbed the steering wheel and ordered the NHS and Public Health England to sort it out using the public sector which was gagging to help.

• The Government target to increase testing and tracing to 200,000 people a day is virtually an admittance that it got this wrong earlier. This should have started a long time ago. It didn’t because quite simply we did not have the capability. Again, ministers might have intervened and called in the private sector to sort it out, which is exactly what is happening now.

• Then there is the problem of care homes. The Government concentrated all its efforts on hospitals; largely ignoring the innocuous and growing tide of deaths in care. In Bromley, deaths in care homes an hospices account for over 20 per cent of mortality figures! Not only was not enough attention focused on care homes but, once the serious risks of being in them was realised, action to counter the problem was slow. In retrospect the policy of discharging people from hospitals back to care homes, without waiting for a negative Covid-19 test first, was a huge mistake. Their conditions in so many cases were not obvious until it was too late. But now we know that people are often most infectious just before they display symptoms.

• We have been slow to quarantine those arriving from abroad because the perceived wisdom was that this would make no difference to the Coronavirus’s advance. Now there is a feeling that much of the early spread of COVID-19 came from people returning from Spain after the Spring half-term holidays. Now we learn that the Government is making plans to quarantine anyone coming here from abroad for 14 days in attempts to avoid any second spike. It seems a bit non-sensical now.

In summary I really don’t want to hear ministers standing at a podium saying that we have got everything right. Of course, they have not. Mistakes have been made – perhaps not all the ones I have outlined – but definitely some mistakes. Dealing with Coronavirus is without doubt the most intricate and difficult problem the UK has faced since at least 1939. Why not admit that rather than keep justifying everything?

People aren’t fools and they know full well that mistakes have happened. Given the crisis we face we are probably very lucky that many more have not occurred. Going back to a military analogy that I started with, everyone knows that the best laid plans never survive contact with the enemy and they have to change. That is exactly what has happened.

Personally, I would like to see the Prime Minister stand up in Parliament and make a full and frank statement in which he outlines not just the situation and plans for the future but also gives his apologies for honest mistakes which his Government may have made. It must be Boris Johnson who does it - because he is the top man and thus the one with real authority. I can almost guarantee that the British public would really appreciate such candour, accept and understand with grace his regret over passed mistakes and most probably fully embrace and support his plan for a way ahead. Boris Johnson is a unique and different type of politician, one that does not always do it as it has always been done, and I hope he will do just what I have suggested. I guarantee it would be well received.