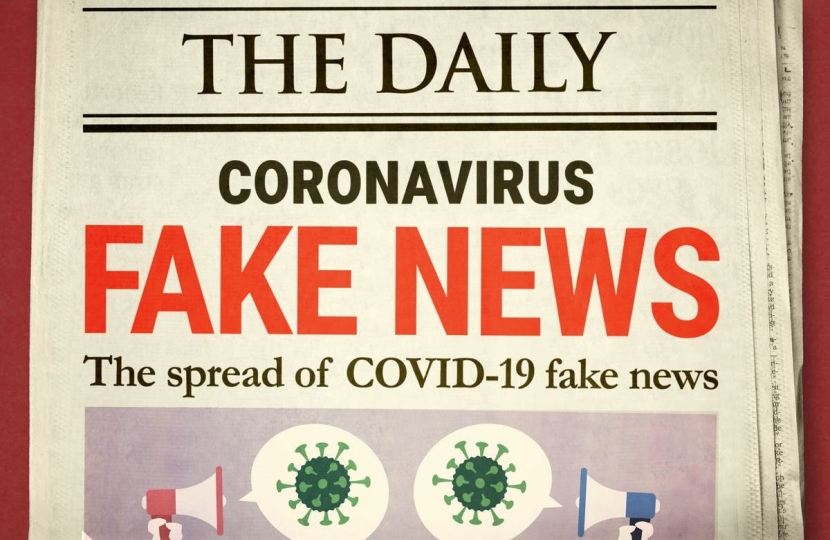 I don’t think I had honestly noticed the term fake news before Donald Trump started trumpeting it at his press conferences when asked on subjects he did not like. But it has always been around. Fake news in the United States is often called yellow journalism.

However, the arrival of that monster COVID -19 has given rise to a plethora of fake news. We all know well enough that certain newspapers leaned to the right or the left and mostly realised their leaders would either support or damn the Government of the day. We also realise that certain journalists are apparently politically biased. That is fine and healthy in a democracy too. Everyone needs to have their beliefs challenged. But that was before.

Now we live in an era where we are swamped with fake news and normal, decent folk can easily be duped by it. Many people rely for all their news from the internet. Newspapers are dying; they are decreasingly bought. When I went on South Eastern from Shortlands to Victoria every morning there was a distinct absence of newspapers. Most commuters looked downwards at very small screens.

Of course, some people are more credulous than others and really believe fake news stories they have presented to them. The United States is probably the biggest target; there was no moon landing and 9/11 was self-inflicted injury master-minded by the CIA or perhaps Israel are really well-known fake stories. Sadly, there are many gullibles who are ready to swallow such claptrap hook line and sinker – not just in the United States but even here too.

It is clear that Russian efforts to swing the last Presidential election to favour Donald Trump capitalised on divisive issues like race relations, immigration and gun control using fake advertising and even videos. Special Counsel Robert Mueller’s 448-page report on Russian actions in that election detailed just how the Russians set up fake social media accounts to spread misinformation that reached tens of millions of US citizens.

Last year I met the Speaker of the House of Representatives, Nancy Pelosi. She too was massive target in 2016 – and not just by the Russians. She’s a sharp cookie and nobody’s fool but the Trump Campaign dishonestly doctored a video of her. In it she looked either drunk or at the very least impaired. Millions of people on Facebook saw it before the Company belatedly took some action on the matter – although it never really removed it completely.

I too sometimes get the accusation that I am a drunk hurled at me. It is utterly fallacious rubbish. My father died young largely because of alcoholism. I took that warning very seriously from the time he passed away. I was 26 years old and he only 52. It was awful to lose him that way and I miss him still. For over 25 years now (since leaving the Army) I have hardly touched a drop of alcohol and socially I stop after a second wine. Actually, I prefer soft drinks or the occasional beer; as Conservative party members here in Beckenham know well. I am a gregarious and open type by nature and I suppose people might misinterpret that. But they are so wrong. Yet, does that matter, I still get the accusation – in the press occasionally but more often in hate filled accusatory e mails or on Facebook, normally from people trying to score political points. Those that know me realise that such fake news is utter claptrap but it still wounds.

Here in UK most recently crazies have been spreading around that Coronavirus is linked to 5G towers and several have been destroyed by fire. The 5G movement's most prominent supporter was David Icke, the goalkeeper-turned-conspiracy theorist who has long argued that the world is secretly run by a race of shape-shifting lizards! Maybe it is (not)! But a friend of mine says he has heard quite a lot of sane, decent and intelligent people who are prepared to give such rubbish a sympathetic hearing.

Even the print media can be duped. On 26 March, the Daily Star published a news story under a headline banner: “Coronavirus: Fears 5G WIFI networks could be acting as 'accelerator' for disease” (the headline has since been changed). It wasn’t long before YouTube, Facebook and Twitter were awash with claims that 5G was the cause of spreading COVID-19. Videos in support of this racked up millions of views. Celebrities and influencers with huge social followings, including American actor Woody Harrelson and boxer Amir Khan, supported the idea and in mid-April, breakfast TV host Eamonn Holmes told viewers it may “suit the state narrative” to dismiss 5G concerns. Conspiracy theorists have even pushed claims on YouTube and in Facebook groups that Covid-19 is a bioweapon or in contrast, even a myth.

Unsurprisingly the Government and NHS, perhaps a little slowly, have scrambled to catch up and scotch fake news stories by seeding social media networks with official advice. At the end of March, the government announced that it now had a Rapid Response Unit, a joint Cabinet Office and 10 Downing Street cyber team, set up to fight disinformation. Apparently, it is dealing with about 70 incidents a week of “false narratives” linked to the coronavirus threat.

YouTube has committed to clamping down on any videos claiming a link between the Coronavirus and 5G, but only after the arson attacks on UK telephone masts. Twitter has said it will remove fake and harmful Coronavirus content, but allowed a tweet for Elon Musk, the American Tech entrepreneur, which, falsely claimed children are “essentially immune” to Covid-19. How stupid!

In the 2019 CIGI-Ipsos Global Survey on Internet Security and Trust a large majority of people (86 per cent) admitted to falling for fake news at least once — citing Facebook as the leading source. I’m guilty of it too as is evident from my post of 29 March where I passed on false information for identifying Coronavirus. Within minutes my sister Alison rang me and said it was rubbish. She is always right of course and within an hour of my post I had taken it down and apologised. So, I am guilty here and have been conned too.

But fake news seems here to stay. Unlike print and broadcast media outlets the internet is very difficult to police. Its nodes and entry points can be anywhere in the World and its reach universal. Very little can stop it, as even the Chinese Government is being forced to concede. Fake News is often also slanderous but that matters little to the people that so often launch so much bilge and accusations into the ether. They cannot be brought to account.

Obviously, I want the internet brought under some form of legal jurisdiction – national and international - to stop all this rubbish being pumped out. There is an especial need for this because what is said via it is so readily believed by so many people. But the truth is that nobody and no government knows quite how to tame the wild excesses and downright lies so often put out using social media. Controlling Fake News on the internet is like trying to herd flies.