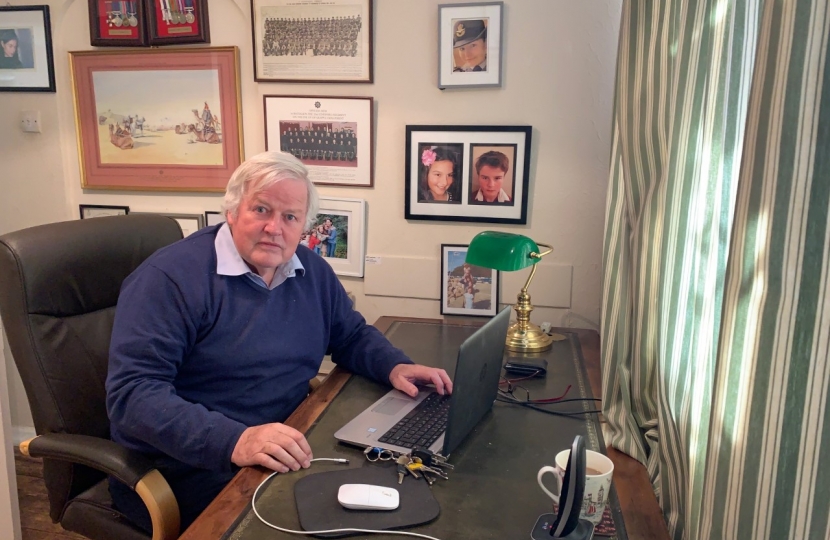 Have I become a ‘sad’ man or what? I am starting to look forward to going to my nearest supermarkets, Tesco’s at Elmers End, Lidl in Beckenham or Waitrose at the Junction. A visit could be the highlight of my day. Maybe I am becoming institutionalised – and obviously a home worker? I long to be free to travel and get back to Westminster to do a major function of what I was elected to do.

I wonder too whether Coronavirus has changed things forever? It has certainly utterly devastated all our social lives and there does not seem an end or at least a date in sight. In truth I really miss meeting, talking and laughing with friends and colleagues. In short I am a bit lonely. I wonder too if it has also demolished the way we used to work for a living too?

In, shall I now say my old days, as an MP, I would be in Westminster from Monday – Thursday and sometimes Fridays, when Parliament was sitting. There I would attend the Northern Ireland Committee as a member, take part in delegated legislation committees, run the four All Party Parliamentary Groups which I chair, chat with other MPs and ministers as well as civil servants, deal with constituents worries by taking them up with the appropriate minister or ministry, sometimes meet with constituents who want to see me in London and also take constituent parties on tours of the Palace. But most of all I would sit and speak in debates within the House of Commons or Westminster Hall. I would do that by default anyway if I had spare time. And of course, I would also vote quite frequently by physically going through either the ‘Aye’ or ‘Nay’ lobbies where I could ‘nobble’ ministers including the Prime Minister with constituency things I wanted them to notice and perhaps fix.

Normally, most Fridays and weekends were reserved for direct constituency matters. I worked locally perhaps visiting places like schools, the police, companies and small businesses – actually a lot of shops.

One of my most enjoyable experiences locally was at Clare House School where we set up a parliament and Year 6 debated whether they should wear school uniform or not. We brought in some props like wigs, a mace, a gown and a sword. The school hall was set up to have Government and Opposition benches and there were places for the Speaker and Sergeant at Arms. I became Mr Speaker and the Head Teacher, Mr Budden, was the Sergeant at Arms - responsible for discipline. I made extensive use of a ‘naughty corner’ (not really a Parliamentary device I admit but fun) and miscreants were confined to it by, perhaps an over enthusiastic Sergeant at Arms who loved pointing that sword! It was really enjoyable and I think the children thought it ‘cool’. Happy days.

Oh yes, on Fridays, from 4 pm I also used to hold surgeries for people who wanted to see me in my Beckenham Office. Sorry, I’m getting a bit nostalgic now for the good old days.

Now I have to try and replicate as much of my normal job from my small office upstairs in my house in Shortlands. It is here that I spend the majority of my day; dealing with a heck of a lot of e mails. Sometimes the postman brings mail which I have had re-directed from Westminster but real letters are almost a thing of the past nowadays. E mails are the overwhelming means of communication with me and, my goodness, they come by their (metaphorical) sack full. People are seriously worried by the situation we are in and I don’t blame them for that. Sometimes I can help and sometimes I cannot. Either way I try to at least respond and help everyone I can.

I think I only consciously fall down when it comes to responding to campaign e mails. Huge numbers saying exactly the same thing often arrive and I simply do not have the capacity to answer most of them. Indeed, once or twice, when I have done so two recipients have come back and asked me why I e mailed them. Both of them had not even realised they had lobbied me with a template custom made and to which they must have agreed at some stage. I am afraid I reserve priority for people with personal problems, especially those people who are desperate.

MPs are allowed to go but discouraged from being in Westminster. We are apparently classed as key workers but the Speaker and the Chief Whip have specifically requested that we do not go to Parliament. Some people do go (a maximum of 50 in the House of Commons Chamber) but they can only be there if they have a formal question for answer on what is called the Order Paper. I have not been in Westminster for 6 weeks now, although, as I have said, I dearly would like normality to return.

However, courtesy of Mr Zoom, Mr Skype and some other IT magic, I have been able to take part in several Northern Ireland Committee virtual meetings. We have even taken evidence from witnesses. That was utterly weird. I sat at home in Shortlands whilst the Chairman, Simon Hoare MP, ran the meeting from his dining room and witnesses gave evidence from their own homes. Two were in Northern Ireland and one was in Australia! It was a bit surreal.

Last week the House of Commons trialled virtual voting. This was done via the Members Hub on the Parliamentary Website. Huge efforts have been made by the Parliamentary Authorities to ensure it is secure from interference. It was strange voting in the House of Commons from upstairs at home. Of course, it is nothing like the real deal of going through either the ‘Aye’ or ‘Nay’ lobbies in person and within 8 minutes of the Division (Voting) bells being rung. However, I don’t like virtual voting. It is nothing like the real thing but, hey, it works I suppose.

None of us at the moment, including Boris Johnson I suspect, knows exactly when life will get back to normal. In truth, when that happens, I think our habits will be quite different to before. I suspect even the way we and the economy work will be different. I so well remember my old school motto as it was drilled into us; Aut Viam Inveniam aut Faciam. It’s so appropriate today. We British will either will find a way or make a way - as we always have done.