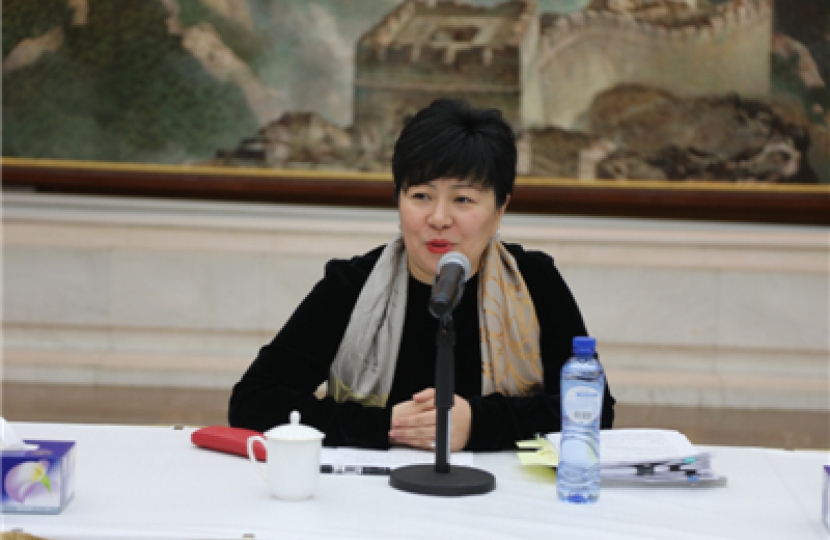 Two weeks ago, I joined the Westminster based China Research Group (CRG) at its launch. As a consequence of the way the Chinese Government is behaving as it continues its rise as a World power the CRG aims to promote open and fresh debate and thinking about how we in the UK should respond. To be honest though I have been worried about the way China is behaving for some time.

Between 9 – 12 June last year I visited Beijing as part of a NATO parliamentary delegation. Although Beijing was utterly clean and modern it was also soulless and I felt very sorry for the people I saw in the street. On 11 June I went to the

China Institute for International Studies and there we were hosted by Professor Jin Ling and a team of presenters. The briefing said very little of note so I asked a question about the Chinese justification for taking over islands such as the Spratly and Paracel archipelagos in the South China Sea when there was no historical justification for it and international arbitration had ruled against China. That set the cat amongst the pigeons and a Mr Xu Longdi, introduced as a ‘researcher’ (was he?) objected quite angrily – especially when I used the words ‘colonialisation and imperialism’ in respect of the takeover of such islands.

I was particularly interested in the People’s Liberation Army’s huge expansion and felt that its primary objective in modernisation and reorganisation was retaking Taiwan in a military campaign. Sadly, I am afraid to say that my impression was that this could happen very soon too.

After a few days there I was pleased to leave Beijing and do not expect to go back there – even if I was to be granted another difficult to obtain visa, which I deem very unlikely.

This year, on 14 April I wrote about my extreme concerns with the way the Chinese Government has dealt with the outbreak of Coronavirus. It took 44 days for the Chinese authorities to declare a pandemic and the Government there tried really hard to silence whistleblowing local doctors and scientists. The Chinese authorities did not even lockdown Wuhan until 23 January by which time the virus had well escaped elsewhere from there.

It is very clear that the Chinese Government is doing its best using an aggressive media as well as social media campaign involving platforms like Twitter, Facebook and Instagram to shift culpability from itself. The latest iteration of this was in late April, when the Deputy Chinese Ambassador to London, Chen Wen (photograph), took to the airwaves on BBC Radio 4’s ‘World at One’ to try and defend her Government’s actions and record during the crisis. Comrade Chen refused to accept that there should be an internationally independent investigation into the origins of Coronavirus and rejected absolutely that the Chinese authorities were in the slightest bit at fault. She was utterly unconvincing and yet I am sure there will still be some in our country that accept what she said at face value. How sad is that?

Again, on 14 April, I wrote that I want the Chinese authorities to be held to account. I don’t know quite how we would do that but it would be honest at least if they themselves accepted their responsibility for the Worldwide COVID-19 pandemic we are suffering right now. They do not. The way the Chinese authorities have mishandled Coronavirus should disabuse us of any possible lingering belief that the Chinese regime could be a responsible World player. It is not, and it will not be whilst the current autocratic and oppressive regime holds sway over the unfortunate 1.4 billion people who live there.

So back to the CRG, whilst issues like Coronavirus, Huawei and other current topics will undoubtedly form part of the debate, the Group is also aiming to consider longer term challenges such as Chinese industrial policy, its development, ownership and regulation of technologies and the effects of Chinese soft and hard power. I am particularly interested, of course, in Chinese military expansionism.

The way China has handled the Coronavirus has most definitely been a catalyst for politicians like myself to look more carefully at the way the authorities in Beijing are viewing and inter-acting with the rest of the World. For me the Coronavirus crisis has underlined the urgent need for a better understanding of China’s place in the World, and a re-think about how we engage economically and diplomatically with Beijing.

China has 1.4 billion people, thus containing over 18 per cent of earth’s human population. It also possesses what seems to me an expansionist, somewhat aggressive foreign and military policy and the money to pay for it. Under such circumstances, Coronavirus crisis apart, we had better get real on what China is up to and quickly.