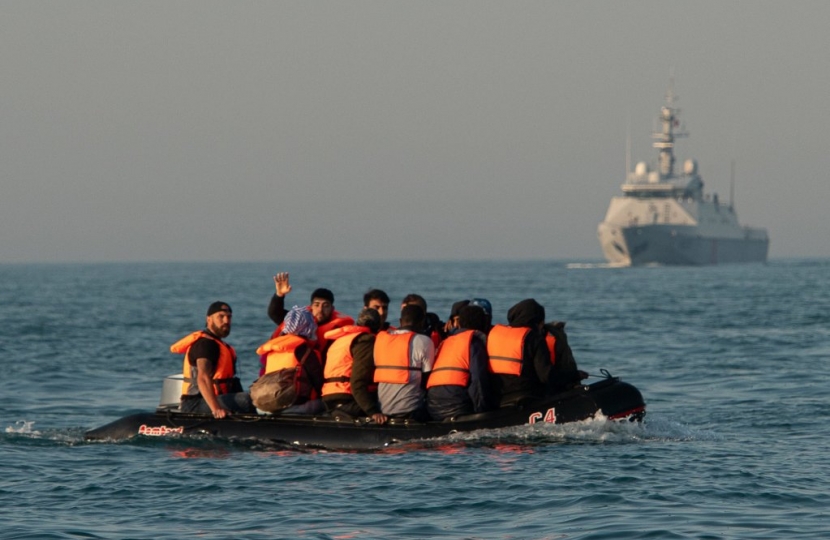 Ensuring our borders remain safe and secure is a prime duty of any government. So, with that incontrovertible fact in mind, I have become increasingly concerned in recent months at the sheer number of migrants reported to be entering our country illegally by boat from across the English Channel. The latest statistics make for stark reading, suggesting a trend which is clearly going in the wrong direction and growing exponentially.

The number of migrants entering the UK via this illegal route reached more than 2,000 in June of this year, setting a new monthly record. Last year numbers were four times higher than the year before: 1,844 in 2019 against 8,400 in 2020. The figure so far for 2021 has already exceeded last year’s total. More than 9,000 migrants have already arrived by boat this year and a new daily record for crossings was broken on 19 July, when at least 430 people succeeded in making this perilous journey.  This has to stop and Government must do that.

It is clearly an unsustainable situation for any country, let alone an island with clearly enforceable borders. The only people benefiting from its continuation are the evil gangs of people smugglers who take large sums of money from the migrants, reported to be around £5000 per person, and deliberately set them on the dangerous journey across the English Channel in unseaworthy boats with the intention of getting them just over the line into British waters so they can be rescued and brought ashore to safety.

I am becoming increasingly annoyed with politicians and activists on the left of politics advocating that we should simply let in anybody who desires to come and settle in this country; effectively a policy of no borders. Along with the vast majority of people in this country, I find this an utterly irresponsible position to take which is completely unmoored from reality!

The very purpose of our asylum and immigration system is to determine through due process whether or not a person has a legitimate claim to enter and remain in this country. Complete chaos would ensue if we simply allowed anybody to enter and stay at will. It would also make a mockery of the system to those people who choose to follow the rules and apply legally to live here.

The government recently struck a £54.2m deal with the French government in which France has agreed to double the number of police patrolling its beaches, fund improved intelligence sharing and introduce better technology to target the gangs who organise the crossings. I am distinctly uncomfortable with paying the French to adequately enforce their own border and will be pressing hard in Parliament to ensure they deliver those undertakings quickly and comprehensively.

The Nationality and Borders Bill currently before Parliament seeks to enforce a fair but firm system that will break the business model of the people smugglers; making it a criminal offence to knowingly arrive in the UK without permission, as well as speeding up removal of those with no right to be here. I very much welcome these robust measures to discourage and stem the crossings.

The British people voted overwhelmingly in favour of controlled immigration when they elected a conservative government in 2019 and to take back control of our borders in the BREXIT referendum in 2016. We must continue to ensure that we deliver on both these top priorities for our citizens.