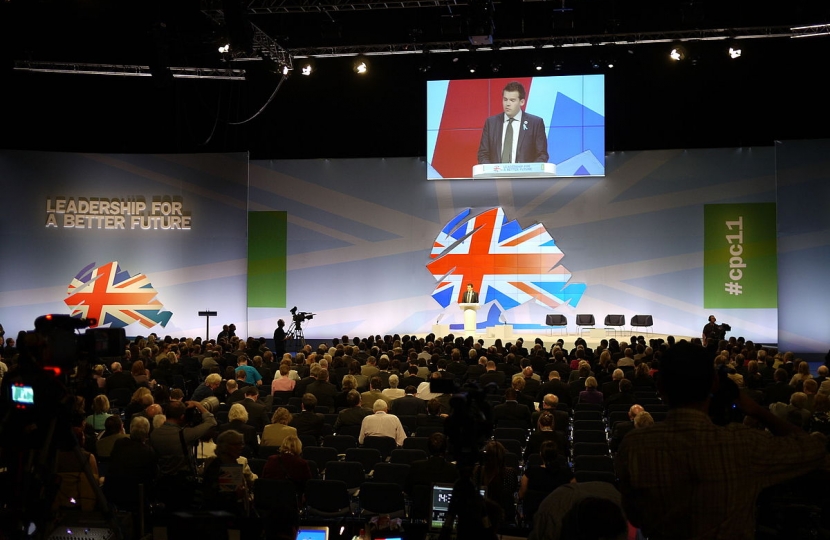 The Conservative Party Conference is ongoing in Manchester at the moment.  Here ministers will take centre stage to set out their vision to the British people on tackling the big challenges we face going forwards.

Due to the pandemic and the strict rules preventing people from gathering in large numbers, it will be the first occasion that Prime Minister, Boris Johnson, has been able to directly address the public from the Conference platform since he led the Conservative Party to a stunning victory in the 2019 general election.

I expect the Prime Minister will use this opportunity to provide us with an honest assessment on the state of our economy following the unprecedented amounts of money we have had to borrow to spend on protecting peoples’ jobs and livelihoods throughout the ghastly pandemic.

As Conservatives we fundamentally believe in balancing the books. Only by maintaining confidence in the British economy will we deliver the economic growth which will pay for outstanding public services. I am sure the Chancellor of the Exchequer, Rishi Sunak, will reiterate this point at the Conference when he lays out the tough decisions which will have to be taken in the Budget next month to ensure the economy continues to gain in strength from the massive shocks brought about by the pandemic.

A central theme throughout this Conference will be a belief that, following our exit from the European Union, companies should be improving the pay and conditions of British workers, in sectors ranging from haulage to food production, rather than relying on the import of cheap foreign labour. For far too long British workers have suffered financially from being undercut by these practices.

The historic vote for Brexit, along  with the subsequent boost in working-class support for the Conservative Party at the 2019 general election, sent a powerful message to politicians and business leaders alike that the electorate were seeking fundamental changes to the way we run our economy and I am very pleased that the government are pursuing this course of action.

I was further encouraged by the opening statement on Sunday from the new Party Chairman, Oliver Dowden, in which he made clear that the Conservative Party will continue to take a firm stand against those who seek to denigrate everything about our country and its proud history as being somehow racist. I really despise the rise of this “cancel culture” where mobs of far-left activists go after public figures on social media and try to get them sacked from their jobs or removed from public platforms for the slightest utterance which they deem to be racist. This country proudly gave birth to the Parliamentary system with democracy as its cornerstone- a fact which seems lost on these people!

I also gather from reports that the Home Secretary, Priti Patel, will be setting out much tougher penalties for protestors who block motorways. This is seriously good news! Like most people I have been seriously jarred off by the latest environmental protests which have brought chaos to thousands of motorists on the M25. These protesters should campaign in the normal way by trying to win people around to their cause; not by recklessly putting drivers’ lives and their own in danger!

Finally, in the short run, I, like so many people have been severely constrained in what I can do by the fuel crisis. My car is grounded too.   I accept it’s probably better for my health to walk rather than drive but nonetheless many constituents are really being severely constrained in work and family activities by it.  It has had an impact on my family too and ultimately the Government has responsibility for correcting what has happened.  So, I sincerely hope ministers will put measures in place very fast to sort the matter out and fast.