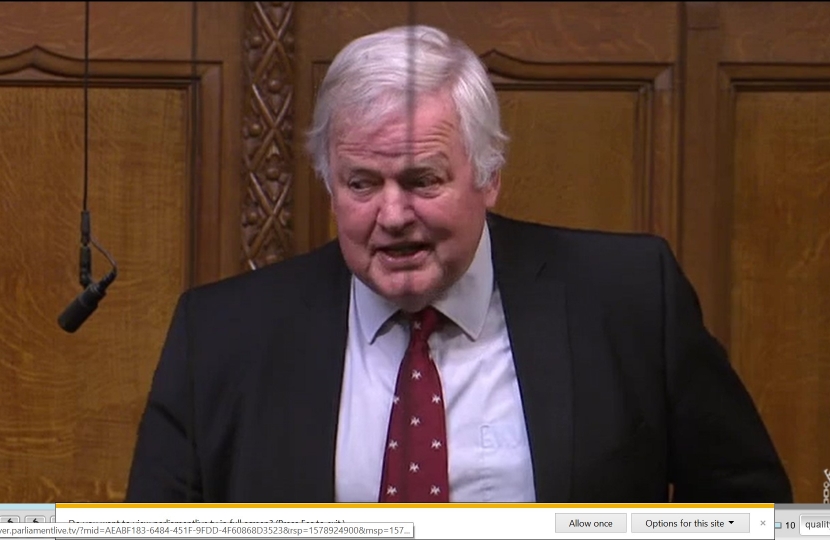 I realise that climate is cyclical; there was a little ice age from late medieval times until the 1850s or thereabouts, and the Thames froze over and ice fairs were held. I also believe that when I was a little boy, not very long ago, it was much colder in the winter—that might just be in my mind, but I felt it was more icy. There is too much evidence of ferocious world weather nowadays for us to ignore what is happening.

Health is definitely being affected too. For instance, according to Bromley Council health people, in one recent year there were 60 deaths across the six wards in my constituency because of long-term exposure to polluted air. I agree that we have started to tackle the problem, and we have had some success: carbon emissions have, apparently, been reduced by 25% in the past 10 years, and that is great; and all coal-fired generating stations will be gone in the United Kingdom by 2025.

It is also really good news that we are the world leader in offshore power generation. We have increased renewable energy generation sixfold in the past 10 years. In 2018, renewable sources of electricity generation supplied 33% of our electricity needs, which is up from 6.9% in 2010. This is all good news.

More and more people are buying and using cars powered by electricity, but they are damn ​expensive. By 2040, diesel and petrol cars should be almost off our roads, so it seems the future for our vehicles will be electricity, but let us not forget hydrogen, which is another source that can be harnessed to run vehicles. A heck of lot of investigation as to how that can happen is being undertaken by the car companies.

Of course, our Government have a major part to play in reducing carbon emissions, and we have too; on 27 June last year, Parliament amended the Climate Change Act 2008 to include the commitment to net zero emissions by 2050. That is excellent news. Some say—I accept this—that we could get there earlier, and let us hope that that is the case, but at least we have a target.

It would be superb if could get there as soon as possible. If we want to get to zero carbon emissions very fast, we have to accept the penalties: giving up our cars, diesel and petrol; travelling only by public transport; stopping flying off to exotic locations in aeroplanes; and changing our central heating systems.

We are decarbonising our economy faster, apparently, than any other G20 country, and we have reduced our emissions by 29% in the past decade, but here is the point: every breath we take is full of something called particulates, which, to be honest, I did not know much about until recently. These particulates—particularly something called particulate matter 2.5—are about 200 times smaller than a grain of sand, so they just float through the air and go into our lungs. They pass into our bloodstream and end up somewhere in our brain, or any of our other organs. I am told—of course, I am no expert, and I suspect that very few of us in the House are experts—that this causes illness and death.

I like the Clean Air Strategy that was published in January last year: it is a good, bold new goal. We have to think carefully about using wood-burning stoves—I do not use the fireplace in my house anymore—and having open fires, and farms will have to change the way they do business. The move on the reduction of ​particulate matter has been welcomed by the World Health Organisation as an example for the rest of the world to follow.

I am now skipping through my pages, Mr Deputy Speaker, to make a final point. We produce about 1% to 2% of the world’s greenhouse gases. If we became carbon neutral right now, it might not make much difference, but that should not stop us doing it —we can become an example to the rest of the world—and the rest of the world is starting to follow and to deal with climate change. Bring it on: let us change the way we live so that the future is bright for those who follow us.