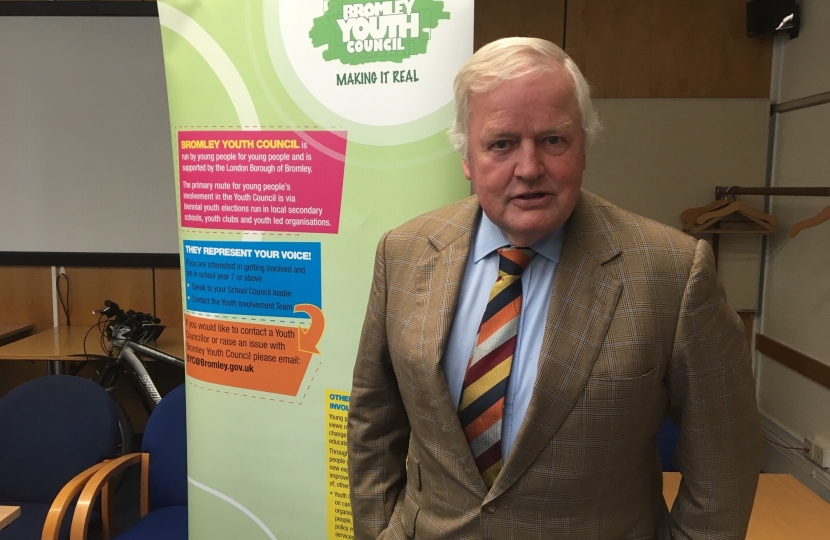 This morning (Saturday 14 September) I attended the Bromley Crime Summit held in the Civic Centre. It was hosted by the award winning Bromley Youth Council (BYC) and chaired by Ms Sharon Baldwin.

I was very impressed by the young people - aged between 11 -19 - who presented the results of a survey of about 700 schoolchildren that the BYC had carried out. I want to repeat some of the findings they found because I think them to be very important.

Their survey clearly showed that possession of knives in the Borough is a problem. Factually between August 2018 and July 2019 the local police discovered 184 people with knives. The BYC survey also found the most vulnerable group for recruiting into gangs and also carrying weapons were between 14 -16 years old. About 45% of school children were concerned about gang crime locally. The crimes young people associated with gangs ranged from drugs (73%), street robbery (55%), assault (39%), arson (9%) and then knife crime (68%).

The BYC recommended that reporting crime anonymously and getting non-judgmental advice and guidance from an organisation called FEARLESS was working well.

Peer pressure and the chance to make money were the top reasons for wanting to join a gang although these reasons were also backed up by poor family circumstances and by gang membership being glamourised as 'cool'. Fifty four per cent of young people interviewed had had no lessons about gangs or gang crime at school which I found surprising. Hopefully schools will take note.

Chief Superintendent David Stringer, who runs the newly established Bromley, Croydon and Sutton Basic Command Unit (BCU), then pointed out that across his area violent crime was decreasing and knife crime was down by 20% over the last year. I am pleased that some of this drop might be as a result of increasing the number of people who are stopped and searched and, perhaps, by initiatives such as from the BYC's campaign. In case of any doubt I fully support the Metropolitan Police's right to stop and search vehicles on spec.

Personally I asked the BCU Commander how quickly 999 calls were answered and he told me that 87 per cent of them resulted in a police office being at an incident within 15 minutes. I thought this to be fair although, naturally, I would like to see a faster reaction.

Inspector Catherine Thomas, also presenting at the Bromley Crime Summit, suggested that Bromley, Sutton and Croydon has had 2,566 burglaries between May 2018 and April 2019. Fifty per cent of these occurred between 7 - 12pm. Forty five per cent were between Noon an 6pm. Interestingly 35 per cent alone occurred on Fridays and 7 per cent on Sundays. Distraction burglaries (where bogus people knocked on doors and sidetracked distracted householders whilst they stole) normally occur between 11am - 4pm. These thieves often pose as being from the Water Board, or being handymen. She reminded everyone that they must ask for proper identification on their doorsteps and certainly not allow anyone into the house until that was done. I was re-assured that she told us all that the police know who the main burglars are locally and they actually have action days to go out and arrest them.

In summary I believed my attendance at the Bromley Crime Summit was time very well spent and some of what I learnt should be passed on to people who read my website.