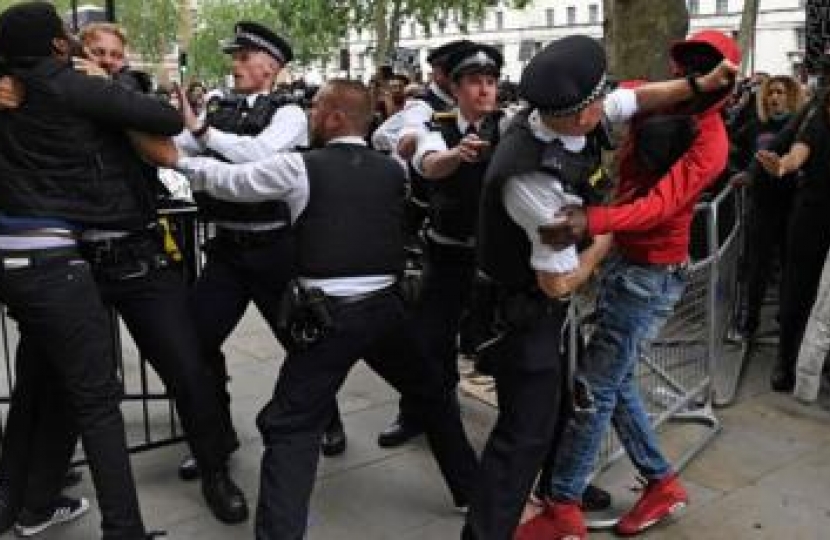 Who isn’t horrified about what happened to an African American man called George Floyd in Minnesota when a policeman knelt on his neck until no air could get through to his lungs and he suffocated? I abhor what happened to George Floyd. Some other policemen were present too and they did nothing to stop what was effectively murder. However, all the policemen involved have been arrested and await judicial proceedings.

Mr Floyd’s murder lead to protests on the streets of not just Minnesota but also Los Angeles, Las Vegas, Denver, Portland, Houston, Atlanta, Seattle, Phoenix, Pittsburgh, Philadelphia, New York, Boston, and Baltimore amongst many other places as well. Most people protesting on American streets wanted to do so peacefully but such demonstrations soon turned to riot, arson and vandalism with the police right in the firing line. As an aside and according to my research, all those 14 cities have Democratic Party Mayors who appoint and control the police. I don’t think one of them is controlled by the Republican Party, of which President Trump is, of course, a member.

I understand the anger over the murder of George Floyd but reject the violence absolutely. That righteous anger has spilled across the Atlantic and we now have sympathetic demonstrations here in the UK. But hitched on to that tragic killing have come several more local concerns; for instance, the death of Belly Mujinga, the selling of police riot control equipment to America, the bid to get our Prime Minister to condemn President Trump’s handling of the American riots. All these points were raised at Prime Minister’s Questions with Boris Johnson last Wednesday so they have indeed reached the top of Government.

Of course, those worries seem to be a part of the Black Lives Matter movement which is organising demonstrations in the UK. For my part I have had quite a few e mails demanding I support the Black Lives Matter campaign. Let me be clear here. I support most of the aims of that campaign although I do not share some of its views about the UK being “a heightened racist police state”. That is wrong.

Also, I do not support the violence that sometimes comes with the demonstrations. This week outside Downing Street in particular they were attacked by people demonstrating and I was witness to it. Personally, I also received a bit of hassling that evening as I was leaving Westminster too. Obviously, such actions are utterly wrong and many in the Black Lives Matter campaign know it. For instance, one person writing on the Black Power Matters website wrote: “I think a public apology should go to the Metropolitan Police due to the conduct of the minority who caused the riot”. I have to say I was very pleased to see that because what I witnessed was worrying.

However, let me end by addressing two worries on which people have contacted me directly.

First, the matter of sending police riot control equipment to America. Politically such equipment requires an export licence. Export licences are overseen in Parliament by the Committee on Arms Export Controls and I can assure everyone that this body takes its responsibilities very seriously. I know because I sat on it for 4 years. So, I am sure the matter of police riot control equipment being sold to the United States will be on its immediate agenda.

Second, on the death of Belly Mujinga and calls for the incident to be re-investigated. May I print the statement made about this by the British Transport Police? It is below and I accept it.

"We understand that the tragic death of Belly Mujinga has shocked many people and that the outcome of our investigation has raised questions. We want to be clear on why we decided not to take any further action – based on key witness statements and having reviewed the CCTV footage, there is no evidence of anyone spitting in this incident.

Senior detectives are confident that this incident did not lead to Belly Mujinga contracting Covid-19. This is because the man in the CCTV footage who detectives interviewed as part of the investigation had a negative antibody test result for Covid-19 in the time after the incident, therefore showing that he had never had the illness. The man’s test did not relate to the BTP investigation – he was tested as part of his occupation and the test results were shared with us during the investigation

Having reviewed all the evidence, senior detectives are satisfied that the incident didn’t lead to Belly Mujinga’s death.

We have kept Belly’s family fully informed throughout the investigation and they will continue to be supported by specialist officers.

Our thoughts remain with her family and we will continue to support them as they come to terms with the loss of their much-loved mother and wife."

I hope I have now laid out my position for those that wish to know it.