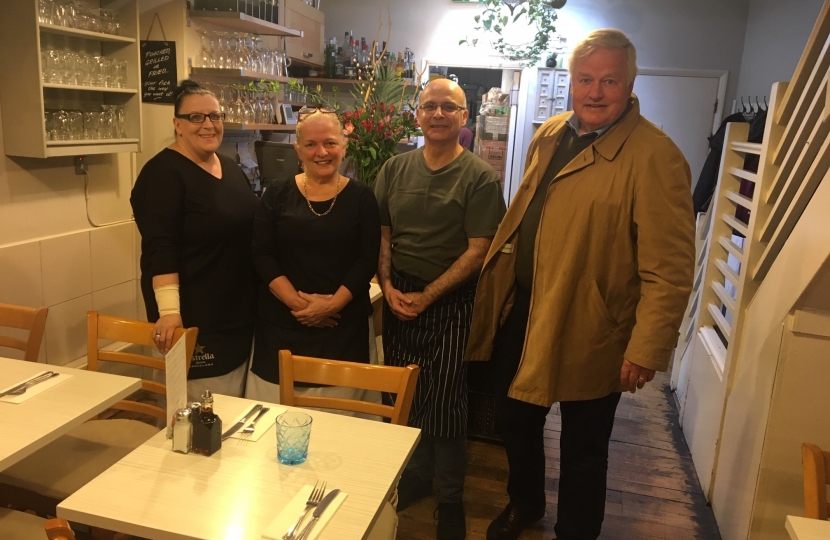 I was a bit surprised when lunching in The Big Catch on Beckenham High Street earlier today (11 October). My surprise came from the fact that one of the people I talked to was adamant that we needed to increase Defence spending. That is not normally the first subject that comes up when I am walking around my constituency which has no service unit with it. His name was Phillip and he reminded me that the first duty of Government was the safety of the people. Great I agree absolutely and was delighted to hear it said. He told me that he believed we were now woefully defended with far too small armed forces. Phillip took particular offence at Russian bombers buzzing our coasts.

I was entirely with him and said so. Right now we are spending about 2.2 per cent of our GNP on Defence and it needs to be far higher than that - plus 3 per cent maybe! I assured Phillip that I was not alone in the Conservative Party in thinking like that and we would do all we could to increase money for Defence.

Whilst on the subject of Defence, last week I lobbied both the Chief Whip and Prime Minister to bring in legislation to protect our Northern Ireland veterans from vexatious prosecutions. I asked for it to be in the Queen's Speech next Monday but that remains to be seen. In particular I remain particularly concerned about the case of Dennis Hutchings, formerly of The Life Guards, now gravely ill and 77 years old, who is yet again being dragged into courts having repeatedly been told it would not happen again. Not before time this hounding must be stopped by legislation if necessary.

The photograph shows me with the staff of The Big Catch having had an early lunch there.