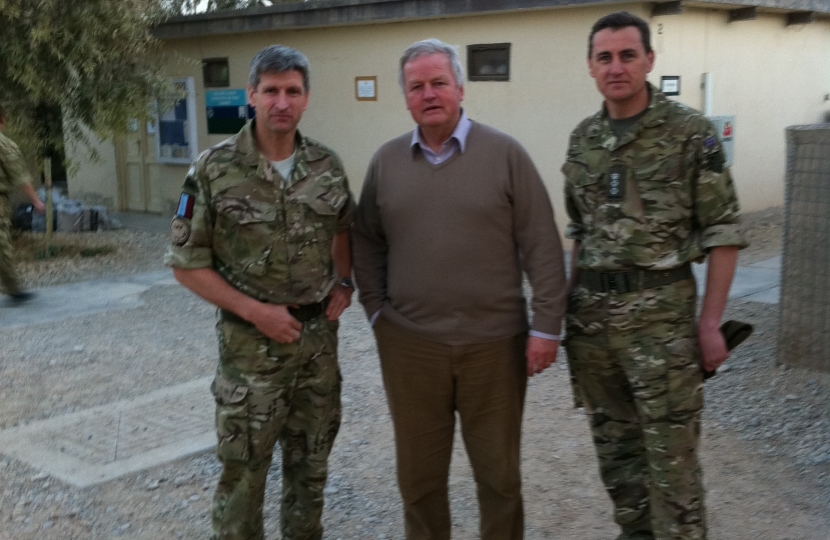 Beckenham MP Bob Stewart visited Afghanistan last week in his role as a member of the House of Commons Defence Select Committee. Bob visited several places in Helmand Province, including Camp Bastion, Lashkar Gah, and the Forward Operating Base at Shawqat in Nad ‘Ali district.

In Kabul the Committee met with senior Afghan politicians, including President Karzai and Defence Minister Wardak, along with representatives of Afghan civil society. They discussed support for the UK’s continuing commitment to Afghanistan, including a long-term partnership beyond 2014 based on shared interests, values and mutual respect.

In Helmand province Bob had the opportunity to speak with Brigadier James Chiswell and Colonel Andrew Jackson of the Royal Irish Regiment (Commander and Deputy Commander of Helmand Task Force respectively) about the challenges they face in Afghanistan. Brigadier Chiswell   served in Bob’s battle group when Bob was United Nations Commander of British Forces in Bosnia: 1992-1993.

“I am satisfied that our soldiers, operating under great danger in Helmand, now have the best possible equipment to protect them in their missions. The challenge facing our troops remains hugely difficult, and I pay tribute to their huge bravery on the front lines. I have growing confidence in their ability to achieve success in their mission- to ensure that Afghanistan can never be used as a launch pad for International terrorism again.”