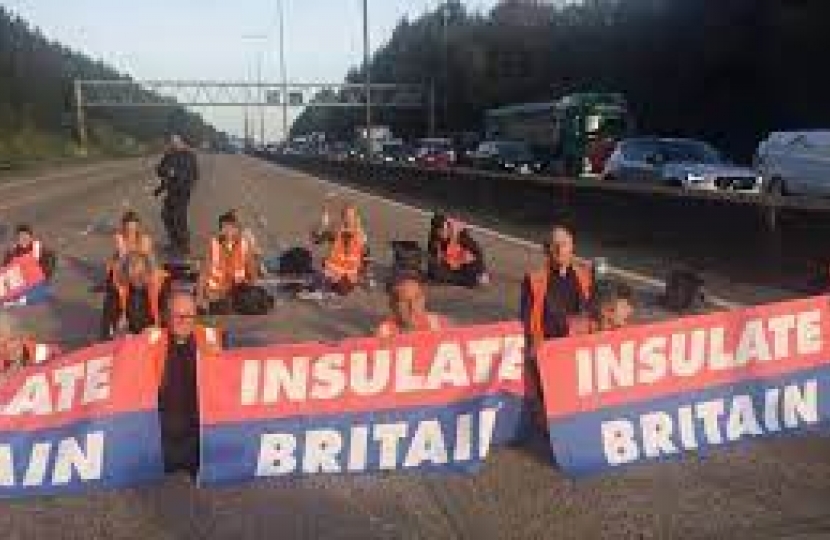 I know most people will be delighted by the news that the Government will bring forward plans this week to deal decisively with the disgraceful activities of the climate activist group, Insulate Britain, who have brought chaos to our motorway and road network in recent weeks. My in box has been filled with messages saying that what Insulate Britain was outrageous.

Insulate Britain are demanding that the government insulate all social housing in the UK by 2025 and retrofit all homes with insulation by 2030. Whilst that may be a worthy objective their primary means of protest to draw attention to their cause is to walk out in groups onto busy motorways and major roads around the country and simply sit down in the middle of the road, thereby blocking it until such time as the police or irate drivers physically move them on. It is an incredibly reckless and selfish way to go about protesting, as well as being downright dangerous to themselves and other road users. This madness must be ended, and I commend the Government for addressing this problem head on!

Under the changes due to be tabled on Monday, Insulate Britain protesters could face six months behind bars and be issued with an unlimited fine. The changes will come in the form of amendments to the Police, Crime, Sentencing and Courts Bill, which are due to be laid in the House of Lords, and will also strengthen police powers to tackle offenders who officers suspect could be about to block or glue themselves to roads, trains, planes, and other vital, critical infrastructure.

It goes against the very concept of natural justice that these hooligans can decide to jam up our transport network at will and simply be free to continue the same outrageous activity repeatedly, seemingly with impunity. The Home Office have stated that the current law, which sets the penalty at a maximum fine of £1,000, was no longer an adequate deterrent for organisations “determined to cause widespread disruption and break the law”.

This group, Insulate Britain, and the climate zealots who make up its ranks have caused months of utter misery to the general public who are simply trying to go about their everyday business, working to support their families. The list of serious disruptions has included: sparking large traffic jams, holding up ambulances and hospital patients, and preventing commuters from getting to work, by blocking major roads and motorways. They have targeted key roads around the U.K. including the M25 around London, the M56 in Manchester, and the A4400 in Birmingham, among others.

Incredibly, the Home Office revealed that, in the first four weeks of protests by the environmentalists, the Group cost the Metropolitan Police alone £2 million in wasted police funds, with total arrests reaching nearly 850 to date. That is an astonishing figure which will make many of my constituents as damned angry as I am- what a shocking waste of resources!

I will be voting for these tougher measures when they come before the House of Commons and I seriously hope it will result in the activities of Insulate Britain being severely curtailed, if not completely stopped in its tracks. People should be allowed to campaign via traditional methods, but not in a way which causes major societal disruption.