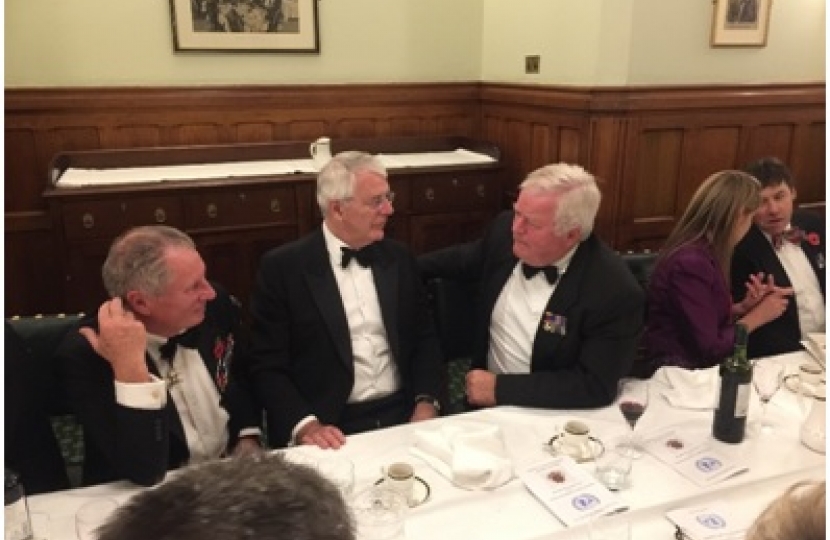 On Monday 30 October Colonel Bob Stewart, British United Nations Battle Group Commander in Bosnia 1992-93, commemorated the armed services' entry into Bosnia on what was called OPERATION GRAPPLE 1 by hosting a dinner in the House of Commons. The Rt Hon Sir John Major and his Wife Dame Norma Major as well as other Government ministers of that time attended. These included The Rt Hon Sir Malcolm Rifkind (Defence Secretary), the Rt Hon Lord Archie Hamilton (Minister for the Armed Forces) and the Rt Hon Viscount Douglas Hogg (Foreign Office Minister) as well as Dame Glynne Evans (then in the Foreign Office) and Martin Bell OBE (then a BBC Foreign Correspondent). Orlando Fraser QC, whose life was saved by now Mrs Claire Podbielski-Stewart, then the Central Bosnia International Committee of the Red Cross delegate and the OPERATION GRAPPLE Field Surgical Team, also came to the dinner. The then Commander British Forces in the Balkans, now Major general Andrew Cumming, the then Chief of Staff to the United Nations Protection Force, now Lieutenant General Sir Roddy Cordy-Simpson and the then Brigade Chief of Staff, now General Sir Richard Barrons, were also present.

Six months in the planning, by Bob Stewart tried to ensure that as many company commanders, platoon and troop commanders, company sergeant majors as well as others such as the Master Chef and Padre from what was then the Cheshire Battle Group were all present. Sadly he could not track down a few individuals who seemed to have disappeared into the ether. But Bob was particularly pleased that members of his own WARRIOR crew, then Regimental Sergeant Major Charlie Stevens, then Lance Corporal 'Higgie' Higginson and then Lance Corporal Chris Gill were present although they were very sad that their friend and fellow crew member, the Late (and Great) Company Sergeant Major 'Tiny' Lawson, who has sadly passed away since, could not be with them as well.

The dinner itself started for the 54 people present with grace being said by Padre Tyrone Hillary who made especial mention of those members of the Battle Group who were killed and wounded in Bosnia.

It was a tremendous event and everyone present vowed to meet again for the 50-year commemoration!