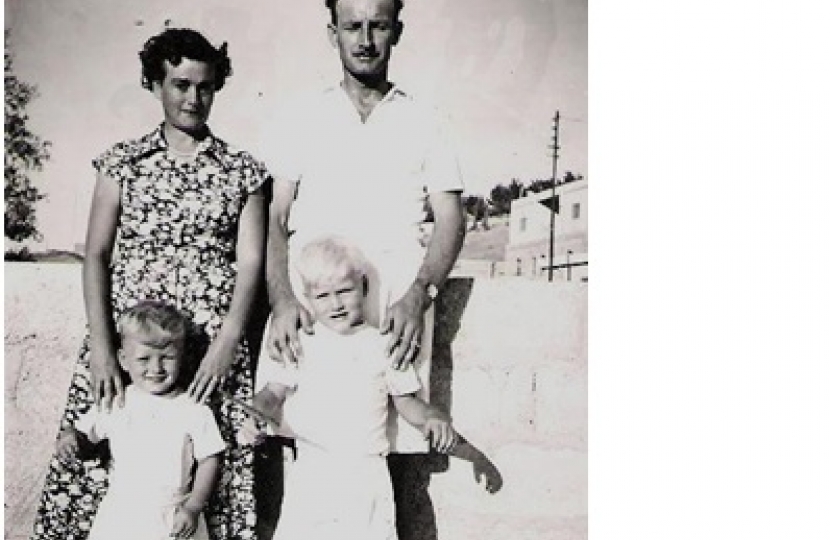 I have a great affection for Israel and Jordan having lived there as a boy with my parents (photograph shows me with my younger brother and parents in Amman during 1954).

The first principle was withdrawal of Israel’s armed forces from territories occupied in the six-day war—the Gaza strip, the West Bank and East Jerusalem, and parts of Syrian Golan Heights. That has mostly happened.

The second principle was the confirmation of sovereignty and the territorial integrity of all states in the region. That certainly hasn't happened.

I fully support Israel’s right to exist and to defend itself against terrorist attacks such as those deriving from the Gaza Strip and South Lebanon. It is a thriving democracy and I want it to continue as such. But, equally, also support the right of Palestinians to have their own state.

Of course it remains appalling that rockets continue to be fired into Israel and that Israeli civil and military citizens are targets of various Arab terrorist groups. The national Government has the right and duty to protect Israel from such attacks. But some of its linked policies to achieve this are wrong. For instance, I question the way in which teh Israeli Government sometimes behaves towards some non-Jewish people who live within territories over which it has day-to-day control.

I am particularly worried at the way in which Israel so often deals with Arabs living within its borders, particularly in the West Bank and East Jerusalem. Removing people from their homes in the middle of the night—often by force—is utterly unacceptable, and so too is the immediate bulldozing of their homes and giving them no place to live.

As I have stated above I still very much support Israel as a sovereign, independent and democratic state, but its actions in demolishing Palestinian and Bedouin communities, particularly in Area C, comes perilously close to some of the stuff I witnessed in the Balkans in the early 1990s.

It is absolutely wrong as well that there are two kinds of law operating in Israeli controlled West Bank areas. Israeli Jews all have the protection of civil law whilst Palestinians and Bedou are dealt with under military law.

Israel must stop such actions as they are utterly wrong and undemocratic. Personally I want to continue to fully to support Israel without reservation (as I still do) but I feel its Government must amend the way it deals with Palestinian and Bedou people living within its powers who should, but do not have, equal rights to its Jewish citizens.