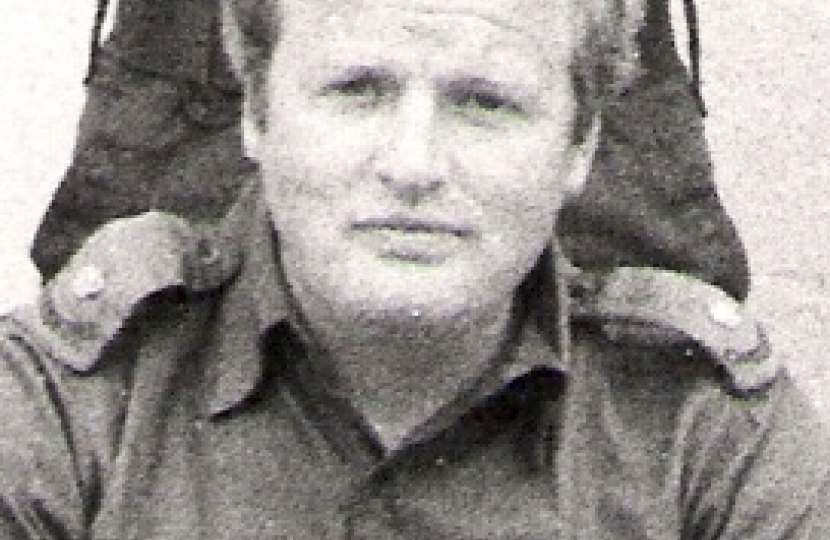 I made the speech below today in a Westminster Hall debate about fatalities in Northern Ireland which involved British military personnel.

I fully support moves to get soldiers who have been involved in fatality shootings which were investigated at the time, immunity from retrospective prosecutions.

This is personal to me. I am one of the 300,000 soldiers who served in Northern Ireland and I spent over three years in the Province. I first went there in the early months of 1970 as a 20-year-old second lieutenant.

To be honest, I was utterly shocked that on my first tour I was operating on the streets of my own country with weapons. That was not the sort of soldiering I had expected. After all, I had been at Sandhurst since 1967. We withdrew from Aden in 1967. We had a year of peace in 1968, and then the British Army was sent to Northern Ireland in 1969. I was very uncomfortable about it.

I deployed to Northern Ireland just after the start of 1970. We were sent to Londonderry, principally to protect the Catholics. I even had a Catholic girlfriend for a time. I was unmarried. [Laughter.]

In Northern Ireland I certainly witnessed bombings and fatality shootings involving military personnel. I want now to centre on how we felt at the time.

Our approach started with our instructions, which were called, “Instructions for Opening Fire in Northern Ireland”—the so-called Yellow Card. I have mine here. This is the 1980 version and I used it when I was a Company Commander in 1982 (see photo).

It is meant to fit into a pocket, so that soldiers have it with them the whole time. The problem is, when a soldier is in contact, he cannot get the card and think, “Oh, what can I do?” It had to be remembered. It has to be built into that soldier; what he or she should do in a case where they might use firearms. It must be instinctive.

So that people understood the rules, there was a lot of instruction on pre-operational tour training. The rules were clear and precise as to what a soldier could and could not do. Let me read them, because they are on one piece of paper.

This had to be in a soldier’s mind:

• We were to use minimum force in all situations, and open fire only as a last resort.

• No live rounds were to be carried in the breech, unless we were ordered otherwise or were about to fire.

• Challenges were always to be given before firing, unless to do so would increase the risk of death or grave injury to us or anyone we considered was being engaged by terrorists.

• Challenges were to be clear: “Army. Stop or I fire!”

• We were ordered to open fire only if someone was committing an act likely to endanger life and there was no other way to stop them.

There are also examples on the yellow card of when a soldier can open fire:

• “Someone firing or about to fire a weapon; someone planting, detonating or throwing an explosive device, including a petrol bomb”. In the early 1970s, petrol bombs on William Street in Londonderry put a third of my platoon in hospital with burns before any firing took place. We did not fire; we did not even consider it. We did not even draw our batons.

• “Someone driving a car at a person, and there is no other way to stop him.” Some hon. Members may be old enough to remember the case of Corporal Lee Clegg, who was convicted of murder in 1993. He fired at a car as it approached him, and as it passed by him turned around and shot through the window. The Yellow Card is precise: he was not in danger anymore, so he should not have fired.

Those rules were drilled into all of us. We practised them. We spent ages in a classroom learning them. We also practised scenarios in exercises, and were judged on whether we had done the right thing.

To decide whether to open fire was an enormous decision, and often—I saw it several times—indecision and worry about whether to open fire resulted in it not happening until it was too late. Fire could have been returned. We all knew that shooting incidents would be investigated, and we had to justify what we had done.

The trouble is, decisions to open fire had to be made in seconds. That is against the background of a soldier, sometimes only 18 years old, having to think all the time, “Am I making the right decision? Is this right? I don’t want to kill someone.” We are human beings. Soldiers are not brutes. If they are, they should be out of the Army.

Those questioning soldiers’ decisions to open fire always have the luxury of ample time to examine what has happened, normally from a warm, comfortable room rather than an operational situation. So often, soldiers who open fire are frightened sick and having to make a decision very quickly. Of course, they are also often in real danger of losing their own life as well.

In all fatality shootings that I knew about, the soldiers concerned had to prove that they acted within the law—often in court. The Army, and the Special Investigation Branch, were not nice to them. There was no cosying up. The interrogations—that is what they seemed —were not cosy by any means.

In 1978, I remember telling two soldiers that they were to be investigated and possibly charged with manslaughter. They had just saved their own lives by using their pistols to extricate themselves from a deadly situation, and they were shaking from the experience. They accused me, their officer, of abandoning them, and they used ripe language about me.

I felt rotten, as I totally understood how they felt. I explained that they had to be investigated to prove that they had acted legally and that the matter would then be over forever.

I believed then that that was right, but in recent years I have become increasingly worried in case I was wrong. In that case, I let my men down badly by what I said at the time.

As politicians, we have a duty to ensure that soldiers such as my two men in 1978 are protected from retrospective investigation, especially into events that we believe were fully investigated at the time and are long in the past.